Yokley adds, “Morning Consult polling conducted in January found 63 percent of Buttigieg’s supporters said they would back Biden or Warren if he were to endorse either candidate, while 52 percent said they would follow his lead if he backed Bloomberg…About half (49 percent) said they would support Sanders or Sen. Amy Klobuchar (D-Minn.), who became a chief critic of Buttigieg during the post-Iowa debates.” One interesting question: how will these second choices change, now that the respondents know that Biden won so decisively in S.C.? Yokley did not provide any data about the second choices of Tom Steyer supporters, a much smaller number than Buttigieg supporters. 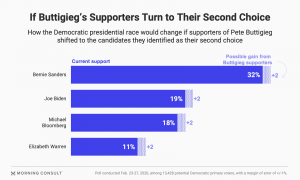 Some Edison Media Research exit poll nuggets from the South Carolina Democratic Presidential Primary:  Of the 56 percent of voters who were African American, Biden won 61 percent, with 17 for Sanders, 13 for Steyer, 5 for Warren, 3 for Buttigieg and 1 for Klobuchar. Biden won a plurality of the 40 percent of S.C. voters who are white, with 33 percent to Sanders’s 23, Buttigieg 16, Steyer 10, Warren 9 and Klobuchar 7…Biden led among non-college voters, with 50 percent, Sanders second with 22 percent…Only 5 percent of S.C. Democratic primary voters self-identified as Republicans…41 percent identified health care as the most important issue, and Biden led among them with 50 percent with 22 percent for Sanders…49 percent of S.C. voters favored “a single government [health] plan for all,” with 46 percent opposed. Biden led among them with 44 percent, with Sanders at 29 percent…Bloomberg had the highest “unfavorable” rating with 66 percent, followed by Klobuchar at 48 percent.

“To put Joe Biden’s South Carolina win in perspective,” Michael Tomasky writes in “California is the Ballgame for Joe Biden Now: If he breaks 15 percent statewide on Tuesday, it’s a two-man race. If he doesn’t, he’ll have a lot of catching up to do” at The Daily Beast, “remind yourself of this. Ten or so days ago, he’d lost nearly all of a huge lead there and was nipping Bernie Sanders by very near the margin of error in some polls. I remember a 27-23 in there, with all the movement toward Sanders, him tightening up even the black vote. You could see the Sanders people on cable and Twitter carefully pre-gloating about the Palmetto Revolution….Now, boom. Biden crushed the field. He won every county. In the exits, he won nearly every category, including African Americans by a thumping 61 to 17. Also, and this is interesting, turnout was very strong. It matched 2008, that year of peak Dem enthusiasm, which didn’t happen in Iowa or Nevada. It did happen in New Hampshire, but as David Wasserman noted, that appeared to be driven by Republicans voting (Republicans were eligible to vote in South Carolina, too; I don’t know how many did)…In other words, for the second time in four contests, we see high turnout correlated not with the candidate whose theory of victory is predicated on getting millions of new voters to the polls, but with the more mainstream Democrats, while the two states where Sanders won the popular vote had pretty anemic.”

At The Cook Political Report, Amy Walter notes that “Biden has been outgunned on the airwaves in Super Tuesday states. According to data compiled for the Cook Political Report by Advertising Analytics, as of February 25, in 13 of the 14 states voting on Super Tuesday, neither the Biden campaign nor Unite the Country, Biden’s affiliated SuperPAC, had any TV or digital presence. The campaign has spent about $100,000 in North Carolina, but it’s not clear if that was dedicated to the South Carolina primary or North Carolina’s Super Tuesday primary…Every other major candidate in the race has put more money on-air/digital than Biden has…The other big roadblock standing in the way of potential Biden momentum is the fact that so many voters have already cast their ballots. According to the Texas Tribune early vote tracker, over 425,000 ballots have been cast in the Democratic primary. In California, according to Political Data Inc., more than 1.3 million Democratic ballots have already been sent in. And, in North Carolina, the Civitas Institute tracker shows more than 205,000 Democratic votes cast.”

With a little imagination, it’s not hard to conjure up a scenario in which Bloomberg becomes a king-maker, or at least co-king-maker with Rep Jim Clyburn. As Walter notes, Biden needs money. He is getting a nice bump in fund-raising post-South Carolina. As Brian Schwartz reports at cnbc.com, “Bundlers backing Joe Biden’s campaign told CNBC that they are seeing a surge in big money commitments in the wake of Saturday’s apparent blowout victory in the South Carolina primary.” Sanders may have lost some momentum, though that is kinda iffy, since so many Super Tuesday votes have already been banked. But Sanders still has plenty of money. What if Bloomberg gave a big bundle of cash to Biden, just to check Sanders’s advantage in ads and ground game? Bloomberg might buy some breathing space by helping Biden, although it is too late to help much with Super Tuesday. But if the Tuesday results are inconclusive, a large cash windfall from Bloomberg or another sugar-daddy/mama could help Biden with the next wave of important primaries. If you can’t be king, king-maker is a not a bad look for a biz tycoon.

It’s all about Super Tuesday’s presidential primaries now. But in an e-blast, the Democratic Legislative Campaign Committee (DLCC) focuses on “a pair of Tuesday special elections for red-leaning legislative districts in Maine and California – because victories right now in tough districts like these could be what sets the stage for Trump’s downfall…In Maine, we’re battling a former incumbent Republican in a House district Trump carried by nearly 8 points in 2016 – in a state that could be essential for keeping him in the White House. Republicans simply cannot afford a loss here if they want to put this state in play. In California, a normally rock-ribbed Republican state Senate seat is up for grabs in a race that could solidify the Democratic supermajority in the legislature and deal a demoralizing blow to Republican dreams of gaining seats this fall.” Those who want to contribute to this cause can do so right here.