For some timely Democratic presidential campaign horserace analysis, check out ricochet.com’s podcast interview, in which conservative Washington Post columnist Henry Olsen and TDS contributor Ruy Teixeira discuss in-depth the outcome of the New Hampshire primary and the possible trajectories of the candidates leading up to the contests in Nevada, South Carolina and beyond. Among Teixeira’s observations: “When you look at this budget, it’s a matter of political malpractice that the current candidates don’t seem to find much time to focus on it. But given the right candidate, I think the amount of ammunition here is enormous.”

“Despite all the democratic socialist hype, the moderates retain the edge inside the Democratic tent,” Bill Scher writes at Politico. “Moderate candidates gave Democrats the House majority in 2018. Single-payer health care has taken a beating on the debate stage over the past seven months—and coughing up the details of the proposal proved to be a political third rail for Elizabeth Warren’s campaign. In fact, moderation may be on the rise with grassroots Democrats; comparing the New Hampshire primary exit polls four years ago to last night, the share of voters who identify as “moderate” went up 9 points to 36 percent, while those who see themselves as “very liberal,” went down 5 points, to 21 percent…So why are moderates struggling to unite? The big moderate divide in 2020 is not about any major policy dispute, but between those who respect insider experience and those who are inspired by outsider energy…Advocates of outsider candidates have the stronger electability argument, which Buttigieg regularly articulates: “Every single time my party has won the presidency in the last 50 years, it’s been with a candidate who was new on the national scene, hadn’t spent a lot of time in Washington, and represented a new generation of leadership.” This covers the last three Democratic presidents—Jimmy Carter, Bill Clinton and Barack Obama. Except for the “new generation” part, it applies to Donald Trump as well.”

“However, two factors complicate Buttigieg’s case,” Scher continues, “One, he is pushing the limits of what can constitute a credible outsider candidate. He’s not a southern governor, or a first-term senator, or even a businessman/TV star, but a small-city mayor. Two, as Klobuchar put it in the last debate, “We have a newcomer in the White House, and look where it got us.” If Americans tend to elect the opposite of the sitting president, as many believe, does it make sense to put up another newcomer, when Democrats want to argue that Trump is in way over his head?…The insider-outsider divide helps explain why Klobuchar was the main beneficiary of the pummeling Biden took in New Hampshire. Compared to the final alignment totals in Iowa, Buttigieg’s share of the vote in New Hampshire (with 97 percent counted) was basically stagnant, ticking down 0.7 percent. Klobuchar, however, jumped almost 8 percent, suggesting a resistance among some moderates to an outsider candidate.”

In his post, “There is hard data that shows that a centrist Democrat would be a losing candidate” at salon.com, Keith A. Spencer draws insights from Thomas Piketty’s paper, “Brahmin Left vs. Merchant Right: Rising Inequality & the Changing Structure of Political Conflict (abstract here),” to explore the implications for the political moment in the U.S. As Spencer writes, “nominating centrist Democrats who don’t speak to class issues will result in a great swathe of voters simply not voting. Conversely, right-wing candidates who speak to class issues, but who do so by harnessing a false consciousness — i.e. blaming immigrants and minorities for capitalism’s ills, rather than capitalists — will win those same voters who would have voted for a more class-conscious left candidate. Piketty calls this a “bifurcated” voting situation, meaning many voters will connect either with far-right xenophobic nationalists or left-egalitarian internationalists, but perhaps nothing in-between…Piketty’s paper is an inconvenient truth for the Democratic Party. The party’s leaders see themselves as the left wing of capital — supporting social policies that liberal rich people can get behind, never daring to enact economic reforms that might step on rich donors’ toes. Hence, the establishment seems intent on anointing the centrist Democrats of capital, who push liberal social policies and neoliberal economic policies.”

Memo to all those who are worried about Democratic candidates starting class warfare: That train has already left the station. See for example, “Trump Hires Union Busters to Oversee Unions” by Brian Young in Trades & Union Digest, which notes, “Within the Department of Labor, there is a section that is devoted to providing oversight to labor unions. It is responsible for auditing financial disclosures and investigating officer corruption…Labor Secretary Eugene Scalia, has hired two new people to work in this oversight role who has a long history of working against unions. Rusty Brown, worked as a union-avoidance consultant. He helped to decertify a union of 27,000 home care workers in Minnesota and pushed the Labor Department to investigate a prominent Texas worker center that was a vocal critic of dangerous conditions in the construction industry. He will begin work in the Office of Labor-Management Standards (OLMS)…The other hire, Trey Kovacs will work as a “special assistant” to OLMS. Kovacs previously worked at the Competitive Enterprise Institute where he advocated for treating worker centers more like labor unions, requiring them to file detailed financial statements and oversight. He has also accused the department of dragging their feet on expanding union financial disclosures. According to his bio, Kovacs writing focuses on the adverse effects of public sector unions. He has written in support of ending the Obama-era Joint-Employer Rule, advocated for the end to exclusive representation for public sector unions, and claimed that eliminating union time would save veterans’ lives at the VA.”

“Democrats Who Use Twitter Are More Likely to Be Liberal: Pew Research Center found support for Elizabeth Warren and Bernie Sanders among that group,” David Cohen writes at AdWeek. Cohen reports that Pew surveyed 6,077 U.S. adults who identify as Democrats or Democratic-leaning Independents, and he notes that “Democrats and Democratic-leaning independents who use Twitter are more likely to support Sen. Elizabeth Warren (Mass.) or Sen. Bernie Sanders (Vt.), while former Vice President Joe Biden did not fare well among that group, according to Pew Research Center…However, it did not bode well for Sanders that 40% of Democrats on Twitter who said they are not registered to vote or unsure of their registration status tapped him as their first choice…”Sanders was the most-followed candidate among Democrats on Twitter, at 21%, trailed by Warren (16%), Biden (11%) and South Bend (Ind.) Mayor Pete Buttigieg (10%)…Former President Barack Obama was the most followed major political figure within this group, at 48% of Democrats on Twitter, followed by former Secretary of State Hillary Clinton (21%) and President Donald Trump (13%).

Cohen notes further, “Pew found that 56% of Democrats and Democratic-leaning independents on Twitter described their political views as liberal or very liberal, compared with 41% of non-Twitter-using Democrats…The think tank said 65% of Democrats who don’t use Twitter believe it is more important for a Democratic candidate to seek common ground with Republicans, even if it means conceding on some issues, while just 54% of Twitter-using Democrats felt the same way, with 45% preferring a candidate who will push hard for the policies his or her party wants.” 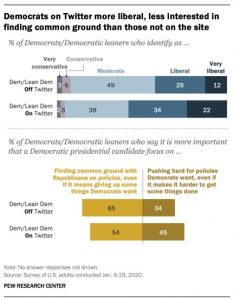 Speaking of ads, the wizards at AdWeek should be agog at the embarrassment of riches placed at the feet of the Democratic party this year, especially in the ever-increasing tally  of video clips of Trump, McConnell and Lindsey Graham contradicting themselves to a ridiculous extent on a vast range of topics, including impeachment, pre-existing health conditions, Trump’s integrity, Russia, Social Security, Medicare and others. Dems seem to have a sort of laissez faire attitude about attack ads — leave it up to the individual campaigns, which is a pretty dicey approach. So far, Bloomberg alone has risen to the challenge of vigorous, high quality attack ads, and you may have noticed that it has served him well. No other candidates have the dough for such a commitment. But it would be good for Bloomberg and Steyer to support Democratic senate candidates by kicking in a couple billion for ads and front-porch canvassing, which has also proven effective. Maybe invite Soros, Turner, Lucas and Spielberg to do likewise.