What direction should Democratic strategy take if Republicans block witnesses from the Senate impeachment trial? In terms of messaging, Sen Kamala Harris’s comment that “there cannot be a true acquittal if there has not been a fair trial” is a good start. Taking a step back and looking at 2020 senate campaign strategy, a GOP witness shutdown would also give Democratic senate candidates additional leverage in close races. Republican obstruction of witnesses slimes their own party. They will undoubtedly hope that the damage fades by November; Indeed they are betting on it. How that pans out depends to a great extent on how well Democratic candidates, activists and especially the media remind voters of GOP witnesss obstruction in the months leading up to November 3rd. In races against the very few Republican senators who voted for witnesses, Democratic opponents will focus more on their final votes to let Trump off in a trial that banned witnesses. Meanwhile, Democratic ad-makers should get busy compiling video footage of Republicans squirming on camera as they try to justify their complicity in naked obstruction of justice. That ought to make genuine Constitutional conservatives of a once-great political party cringe in shame.

Alan I. Abramowitz explains the “Democrats’ Dilemma: Ideology, Electability, and the 2020 Presidential Nomination in Iowa and the Nation” at Sabato’s Crystal Ball, and notes, “The evidence displayed in Table 3 provides some empirical support for the belief of many Democrats that Biden has a better chance of defeating Trump than Sanders. On average, Biden outperforms Sanders in matchups with Trump nationally and in 11 of 12 potential swing states for which polling data are currently available. The difference is slightly larger in the swing state polls than in the national polls. And the differences between the two Democratic candidates are generally small. Thus far, in the national polls and in most of the swing states, including the three that were critical to Trump’s Electoral College victory in 2016 — Michigan, Pennsylvania and Wisconsin — both Sanders and Biden are leading Trump…The fact that the differences in general election performance between Biden and Sanders are fairly small, especially in the national polls, is not surprising given the deep partisan divide that exists over the incumbent. A presidential election with a running incumbent like 2020 is largely a referendum on the incumbent. The vast majority of Democratic voters would be expected to support any of the leading Democratic challengers over Trump.”

Table 3: Polling averages of Biden and Sanders vs. Trump 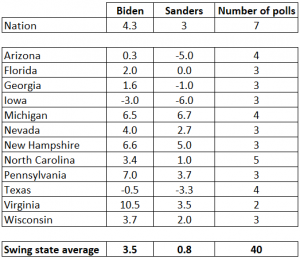 Abramowitz is author of “The Great Alignment: Race, Party Transformation, and the Rise of Donald Trump.”

Most of the media coverage of the current Democratic presidential race has lately focused on front-runner Biden and Sanders. Elizabeth Warren has lost some support recently. But she is still a formidable candidate in key swing states. Richard Parker makes the case for Warren at The Nation, and notes, “Warren has also been consistently effective in helping elect other Democrats—allies a president will desperately need. In 2018 alone, she raised $8 million for congressional candidates, then personally called all 172 of them to offer her support and went on to meet with 61 of them face-to-face to lay out how to best deploy that support. She firmly grasps the reality the media’s relentless, monocular focus on the presidential race misses: that in order to deliver bold change, the next president will need a Congress that shares (rather than checkmates) an agenda with the White House…Her opposition to Wall Street’s endless predations has also been consistent, courageous, and persuasive—and tied directly to her recognition that 40 years of growing income and wealth inequality won’t be reversed without the reregulation of finance…She played public and behind-the-scenes roles in crafting the still-unused powers of the Dodd-Frank Act to tame Wall Street and in creating the Consumer Financial Protection Bureau, Washington’s first new (and under the Democrats, demonstrably effective) regulator since the New Deal…In her skill and dedication campaigning for other candidates; in doggedly shepherding tough, controversial bills through Congress; and in constructing a significant federal agency from scratch, Warren has demonstrated her ability to both win elections and govern.”

At Roll Call, Jacob Fischler provides some insights about the urgency of Democrats getting more pro-active in the fight against Repubican gerrymandering: “The state legislative campaign arms of both parties said wins in Florida, Georgia, North Carolina, Pennsylvania, Texas and Wisconsin would help win congressional majorities for the next decade. Those six states send a total of 116 representatives to the U.S. House — more than a quarter of the entire voting body. Republicans outnumber Democrats in their combined delegations, 69-46, with one vacancy in Wisconsin…Both chambers of the legislature in all six states are now held by Republicans, and all empower their legislatures to draw congressional district lines…The first election cycle of a decade carries added importance because the winners will use the new census to draw district lines, which generally stay in place for 10 years. By percentage, the closest chamber to flipping is the Pennsylvania House, where Democrats would need to win 4.9 percent of seats now vacant or held by Republicans for a majority. The greatest gap is in the Georgia Senate, where Democrats would have to flip 14.3 percent of all seats…Matt Harringer, a spokesman for the Democratic Legislative Campaign Committee, which focuses on state legislatures, said the party was caught off-guard in the 2010 cycle, when Republicans spent heavily in state races and netted close to 700 seats nationwide…The DLCC said on Jan. 16 it would spend $50 million on what it called its “Flip Everything” campaign. And at least one Democrat-aligned group, Swing Left, is also spending in state legislative races, choosing targets based on redistricting.”

Regarding redistricting opportunities in Texas, Fischler notes, “The Texas House, for example, hasn’t seen a Democratic majority in 18 years. The party would need to pick up nine seats this cycle to change that trend…Texas’ size — it’s the largest not to use an independent commission for its maps — and projected growth make it critical for both parties this cycle…If Democrats can successfully make the Lone Star State a battleground, it will help the party outside the state’s borders as well, forcing Republicans to draw resources from other competitive states…“When Republicans are going to be forced to defend Texas and spend millions and millions of dollars there, it makes it harder for them to spend in a place like Minnesota,” Harringer said…Patrick Rodenbush, a spokesman for the National Democratic Redistricting Committee, pointed out that a number of suburban congressional seats have trended blue the last few cycles, further helping the effort to take over the Texas house…Flipping a chamber in Texas, as in Florida, Georgia or Wisconsin, would break a Republican trifecta — control in both legislative chambers and the governor’s office. In all states but Minnesota, one party controls both legislative chambers going into the 2020 elections.”

Fischler adds, “Flipping a chamber in Texas, as in Florida, Georgia or Wisconsin, would break a Republican trifecta — control in both legislative chambers and the governor’s office. In all states but Minnesota, one party controls both legislative chambers going into the 2020 elections…Ballot-box battles represent one front of an expanding struggle over legislative maps, as both parties have stood up their own organizations to fight for better maps for their side. That may involve courtroom battles, advocacy for state initiatives or political campaigns. For instance, the NDRC’s separate foundation filed the state court suit that resulted in North Carolina’s new maps…Democrats don’t even have to flip entire chambers in some cases to increase their power over maps. In Kansas, the DLCC is aiming to flip enough seats to break GOP supermajorities in each legislative chamber. Such a win would give Democratic Gov. Laura Kelly real veto power, without the possibility that her veto could be overridden on party-line votes…In Ohio, a new redistricting process requires that at least half of both parties vote for the new lines in order for them to go into effect. Rodenbush said that means that every seat Democrats gain there matters, even if they don’t flip the entire chamber.”

“A few months back, Republicans held a secret meeting to plot their strategy for gerrymandering America’s congressional and legislative districts after 2020. It was attended by nearly 200 GOP lawmakers from across the country. But now, leaked audio of the meeting is exposing the GOP’s grand strategy and outlining exactly what they have planned to make this takeover happen…In the recordings, Republicans exchanged tips for disguising illegal racial gerrymandering from the courts and discussed lying to the public about their true intentions. But their intentions couldn’t be clearer: The GOP is prepared to carve up the country and silence Democratic voters for another 10 years…a list of Republicans who were at that meeting was also leaked – and we have a chance to defeat some of them in elections this year, stopping right-wing gerrymandering plans in their tracks…Brett Kavanaugh and the conservative Supreme Court knew exactly what they were doing when they greenlit right-wing partisan gerrymandering last summer – and now, Republicans are already preparing to lock Democrats out of power for another decade, if they get the chance.” — From a Democratic Legislative Campaign Committee (DLCC) e-blast. Those who want to help the DLCC fight gerrymandering, can do so right here.