When the Democratic presidential campaigns first got underway, there was chatter about making worker rights a leading issue in the 2020 election. It  seemed like a good idea — adults spend half their M-F waking hours on the job. But somehow, perhaps as much because of Trump’s mastery of distraction as anything else, the concept devolved into a drive-by talking point for a few candidates. Those who still think it’s a promising approach for awakening more of America’s 100 million non-voters should read “An SOS Call for America’s Workers: The new Clean Slate report alerts the public and policymakers about the dismal state of worker power and worker voice” by Steven Greenhouse at The American Prospect. Greenhouse, author of “Beaten Down, Worked Up: The Past, Present, and Future of American Labor,”  spotlights a new report, “Clean Slate for Worker Power: Building a Just Economy and Democracy,” which could serve as a useful resource for Democrats who want to address worker discontent in their campaigns.

Greenhouse notes recommendations from the Clean Slate Report, including “Give workers the power to elect 40 percent of the members of corporate boards. Moreover, corporate boards would need a supermajority to approve decisions with the biggest impact on workers…Require employers to engage in industrywide or sectoral bargaining once 5,000 workers or 10 percent of an industry’s workforce (whichever is smaller) petition for such bargaining. (The secretary of labor would help define which employers are in which industrial sectors.)…Require employers to bargain over a far wider set of issues. Under current law, unions generally can bargain over only wages and working conditions. The report recommends that unions be allowed to bargain over, for example, their company’s contribution to global warming or its violations of consumers’ privacy or the difficulties its workers and the greater community face finding affordable housing. The report says unions should also have the power to invite community groups to join them at the bargaining table.” Securing any of these reforms will require a Democratic landslide in November, which Democratic federal, state and local candidates should be calling for at every opportunity.

Thomas B. Edsall’s NYT column, “Why Trump Persists” probes the effects of political ambivalence among Democratic voters, and writes “What difference does it make if liberals and Democrats are more ambivalent than conservatives and Republicans?…For one thing, it means that in elections that are increasingly negative, ambivalent partisans — Democrats in this case — will be more vulnerable to attacks designed to generate conflict, to weaken enthusiasm and to increase the likelihood of nonvoting. President Trump and the proponents of the Republican Party he dominates are certain to do all they can to capitalize on this vulnerability…Most importantly, Democratic ambivalence, in a year when high turnout is mandatory, reflects the larger problem facing a political party that is now focused on its shared animosity to Trump. That animosity may or may not be enough to propel its presidential candidate to victory, but the inherent tension between different sectors of the center-left coalition over ideological, economic and social issues — not to mention glaring levels of intraparty income inequality — calls into question exactly what common ground holds the Democratic coalition together. How common is it?”

From Robert Kuttner’s “The Pocketbook Issues Are Still the Democratic Road to Victory: And backing off the ‘identity’ issues will achieve nothing but mush,” also at The American Prospect: “The 2016 election in Pennsylvania, Michigan and Wisconsin was so close that Democrats only need to win back a tiny fraction of Trump voters and they will win the election. And without a compelling stand on pocketbook issues, watering down support for racial justice or reproductive rights will gain the Democrats little…There are just enough Democrats who win in swing states by putting pocketbook issues first—yet without backing off the social justice issues—to show that this can be good politics. Ohio Senator Sherrod Brown is Exhibit A. Montana Governor Steve Bullock is Exhibit B. These progressive Democrats are not unicorns, and we need more to follow their example…That’s why it makes political sense for the Democrats to nominate a populist economic candidate such as Elizabeth Warren or Bernie Sanders. Any Democrat will be tarred with the brush of being a cultural lefty—soft on immigrants, gays, and minorities; ignoring the rights of the unborn and gun owners—even if they try to disavow it. Only if the message on economics is compelling does it stand a chance of breaking through the cultural prejudices…Democrats also need African Americans and Hispanics to turn out big time. Disdaining their aspirations as mere “identity politics” is a lethal wet blanket in those communities…It isn’t easy to thread this needle, but it is necessary and possible given compelling leadership.”

In his article, ““Shit-Life Syndrome,” Trump Voters, and Clueless Dems” in Counterpunch, Bruce E. Levine, author of Resisting Illegitimate Authority: A Thinking Person’s Guide to Being an Anti-Authoritarian―Strategies, Tools, and Models, provides this nugget of strategic insight: “Getting rid of Trump means taking seriously “shit-life syndrome”—and its resulting misery, which includes suicide, drug overdose death, and trauma for surviving communities…Here in Ohio in counties dominated by shit-life syndrome, the Dems would be wise not to focus on their candidate but instead pour money into negative advertising, shaming Trump for making promises that he knew he wouldn’t deliver on: Hillary has not been prosecuted; Mexico has paid for no wall; great manufacturing jobs are not going to Ohioans; and most importantly, in their communities, there are now even more suicides, drug overdose deaths, and grieving families…You would think a Hollywood Dem could viscerally communicate in 30 seconds: “You fantasized that this braggart would be your hero, but you discovered he’s just another rich asshole politician out for himself.” This strategy will not necessarily get Dems the shit-life syndrome vote, but will increase the likelihood that these folks stay home on Election Day and not vote for Trump.”

Chris Cillizza writes about the possibility of “A Bernie Sanders Sweep” at CNN Politics, and observes, “New Hampshire polls conducted by CNN/University of New Hampshire and NBC/Marist College and released Sunday morning show Sanders with leads of nine and seven points in the Granite State. And in Iowa, a new New York Times/Siena poll puts him up eight points…Sanders’ edge in New Hampshire has been steadier and larger; he has an average five-point lead, according to the Real Clear Politics polling average of all surveys. In Iowa, Sanders is in an effective dead heat with Biden in the RCP average…The last time one candidate won both Iowa and New Hampshire in a Democratic presidential primary fight was 2004 — and Kerry cruised to the nomination following those twin wins.” My main question about a Sanders nomination: Would he get clobbered for being repeatedly branded a “Socialist,” or would that get stale by November and not matter much? It would be helpful to know what percent of 2016 Democratic voters say they would not vote for him under any circumstances, even though that could change in his favor the months ahead.

But any Democratic presidential nominee will likely be called a “socialist” by the Republicans in an unprecedented tsunami of political ads. An accused Democratic nominee could deploy the ‘Truman defense” —  “Republicans call anything that helps people ‘socialism,'” and there are plenty of examples of Republicans calling popular reforms socialism, including Medicare and Social Security. Also say “I don’t do ‘isms.’ That’s your hang-up. I support whatever helps Americans have  better lives.” 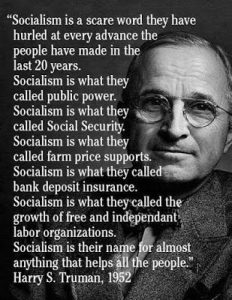 Despite the recently-improved polling numbers for Sen. Sanders, former Vice President Biden is still polling well a week out from Iowa. There has been some recent buzz that Sen. Kamala Harris may soon endorse him, despite her giving Biden a hard time in the first presidential debate. Primary season selection of a vice presidential running mate may come off as a tad gimmicky. But a Biden-Harris ticket could help him with turnout of African Americans, women and younger voters. It would also make Biden look good as a leader who doesn’t marinate in grudges, in stark contrast to the current White House occupant. in the post-war period, veep selections haven’t helped much, with the exception of  JFK’s choosing LBJ. But McCain’s choice of Sarah Palin and McGovern’s Eagleton pick (before he selected Shriver) probably hurt. Nowadays a veep candidate’s home state may matter less than her demographic background.