From “As Richmond braces for hate, Americans say race relations are getting worse” by  Sara Kehaulani Goo at Axios on the 35th MLK holiday: “Is the president really responsible for rising racial tension?…A majority of Americans say he is, according to a survey last year by non-partisan Pew Research Center. But the diverging views between blacks and whites and Democrats and Republicans make it seem as though they are living in different versions of America…A strong majority of blacks (73%), Hispanics (69%) and Asians (65%) say Trump has made race relations worse, compared with about half of whites (49%), according to the Pew Research Center survey released in April 2019…Majorities of blacks and Hispanics say that people are more likely to express racist or racially insensitive views since Trump was elected…More than 8 out of 10 Democrats say the president has made race relations worse; just 1% say he’s improved relations…More than a third of Republicans say Trump has made progress toward improving race relations. Just 20% say he’s made it worse.”

Commemorating MLK on the holiday, Washington Post syndicated columnist E. J. Dionne, Jr. quotes from one of President Obama’s most eloquent speeches: “That the forces celebrating King prevailed spoke to a healthy intuition that cannot simply be written off as tokenism…No one championed this view more passionately than former president Barack Obama. In 2015, he offered his most powerful testimony on its behalf when he traveled to Selma, Ala., to celebrate the 50th anniversary of the “Bloody Sunday” march for voting rights…“What could be more American than what happened in this place?” Obama asked. “What could more profoundly vindicate the idea of America than plain and humble people — the unsung, the downtrodden, the dreamers not of high station, not born to wealth or privilege, not of one religious tradition but many — coming together to shape their country’s course?”

In his article, “Mitch McConnell may win the impeachment and lose the Senate” at The Hill, Albert Hunt writes that “the Kentucky Republican may turn out to be an asset for Democrats in the fall, as already competitive challengers against Republican incumbents are tying those incumbents to the Senate majority leader, not so much on impeachment but rather on his legislative role: rushing through right-wing judges and bottling up popular House-passed legislation, including crackdowns on rising drug prices, boosting the minimum wage, some campaign finance reform and pay equity for women…On most of these issues, McConnell doesn’t want his half-dozen endangered incumbents to face a vote that big financial interests, always a primary McConnell priority, oppose.”

In his post-debate poll analysis, Nate Silver notes at FiveThirtyEight that “our topline forecast is largely unchanged. Biden remains the most likely candidate to win the majority of pledged delegates, with a 41 percent chance, followed by Sanders at 23 percent, Warren at 12 percent and Buttigieg at 9 percent. There is also a 15 percent chance that no one wins a majority, a chance that could increase if Bloomberg, who has now almost caught Buttigieg in our national polling average, continues to rise.” Silver’s chart: 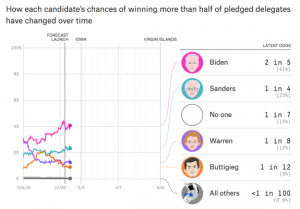 “What did Sanders and Warren discuss at that meeting in 2018? Who misinterpreted whom? It shouldn’t matter. This is no way to select a nominee,” David Daley writes at salon.com “Sanders and Warren are natural allies. Their supporters share overlapping policy agendas. They seem to like and respect each other personally. They’re only fighting this fiercely over ephemera to try and move a handful of voters from one column to the other ahead of a tight four-way race. Our very winner-takes-all election structure not only encourages this inane behavior, it almost necessitates it…The problem isn’t the people. It’s the all-or-nothing nature of the system. It is time to change it…Just imagine how different Sanders and Warren might campaign if we elected our leaders with ranked choice voting, and voters had the power to select their backup second and third choices to count if their first choice couldn’t win. Sanders and Warren wouldn’t be at each other’s throats, and we wouldn’t be seeing their supporters battling with snake emoji and unleashing powerful emotions about gender still raw from 2016. They’d be campaigning as a team, urging followers to support the other as a second choice…Different incentives lead to a different kind of race. When candidates also compete to be second and third choices, they play nicer and engage in less negative campaigning. They need to appeal to supporters of other candidates. They can’t risk alienating them.”

Regarding the fuss between supporters of Sens. Bernie Sanders and Elizabeth Warren, Harold Meyerson writes at The American Prospect: “I’m not going to be around in 2070, but if somehow there’s any money left in my posthumous checking account, I’ll bet it all that they’ll both be remembered for initiating a sharp break with the financialized capitalism of the past 40 years, and bringing the cause of a radically more democratized and egalitarian economy into American political discourse and the highest levels of American politics. Unlike the other candidates in this year’s Democratic field, each wants to tax wealth and financial transactions, each wants to put workers on corporate boards, each wants to switch to Medicare for All (if at different speeds), each backs free universal child care and preschool, each wants to curtail hedge funds and private equity, each wants to go as far beyond Obama and the previous ideology of the Democratic Party as (to paraphrase Michael Harrington) Roosevelt went beyond Hoover. As well, each has sworn off high-dollar fundraising and depends solely on small contributions—again, unlike the other Democratic candidates…In fact, both Sanders and Warren, whatever their flaws, are daily prescribing the kinds of radical egalitarian reforms that our increasingly plutocratic nation so badly needs. Campaigns are invariably about comparisons and differences, but I hope Warren’s and Sanders’s supporters, and Warren and Sanders themselves, can remember how much, uniquely, they have in common, and how important it is that their common perspectives, under either’s banner, prevail.”

“Of course, every group of reliable Democratic voters is important,” David Edward Burke writes in his article, “Who, Exactly, Makes Up the Democratic Base?” at The Washington Monthly. “But if Democrats want to consistently win elections in 2020 and beyond, they need to think differently about who, exactly, the base is and what unites them. The foundation of the Democratic Party is not built on what we look like, but rather, on a set of ideas that reflect our shared values. As President Obama has said, we don’t need to embrace a false choice between appealing to minority voters or white working-class voters. A candidate who prioritizes and effectively speaks to the issues that most voters truly care about can do both…Even in 2016, Democratic voters were approximately 60 percent white, 20 percent black, and 14 percent Hispanic., and 45 percent of all voters were whites without a college degree. By the time a coalition big enough to win in a general election is assembled—unmarried women, black voters, Hispanic voters, millennials—the concept of “the base” is no longer effectively measured by demographic makeup…It’s also not ideologically monolithic. The Democratic party is neither overwhelmingly liberal or moderate: Self-identified liberals make up 46 percent of the party, whereas moderates comprise 39 percent, and conservatives 14 percent. Therefore, a candidate who appeals more to liberals at the exclusion of everyone else is not necessarily more likely to turn out the base than a more moderate candidate—let alone attract independents.”

“If the Democratic Party wants to turn out their voters in 2020,” Burke continues, “they should choose a nominee who speaks effectively to the priorities and anxieties of the majority of Americans. On average, voters want someone who can help lower prescription drug costs, enact sensible gun control, invest in infrastructure, and strengthen women’s rights. They shouldn’t pick someone peddling divisive policies that can turn off more voters than they turn out…Any candidate who can remain in step with most Democratic voters while not adopting more extreme policy positions will likely win over many independents and Republican-leaning voters as well. A majority of Republicans also support increasing federal spending on education, rebuilding highways and bridges, and imposing universal background checks on gun sales…What’s more, approximately one-third of Republicans support raising taxes on corporations or believe abortion should be legal in most or all cases. Trump was out of step with most Americans in pushing for a tax break for corporations and the wealthiest Americans, standing in the way of gun control, and separating immigrant children from their families. Simply put, there is a golden opportunity for Democrats to exploit those weaknesses…But to take advantage, party leaders need to stop defining its base through the prism of age, race, or gender. It’s by focusing on the issues that most Americans care about that the party will succeed in 2020. If Democrats do that, they can turn out their base and reach enough swing voters to make Trump a one-term president.”