Some data for Dems about U.S. military spending and costs in the Middle East, as reported by Jake Thomas at The Intellectualist in November: “A new study on military spending in the post-9/11 era found that American taxpayers have shelled out $6.4 trillion on wars in the Middle East and Asia, according to CNBC…Published by the Watson Institute of International and Public Affairs at Brown University, the report also found “that more than 801,000 people have died as a direct result of fighting — with more than 335,000 being civilian deaths. A further “21 million people have been displaced due to violence.”…The figure cited in the report — which CNBC noted is $2 trillion more than the entirety of the federal government’s spending in 2019 — “reflects the cost across the U.S. federal government since the price of America’s wars is not borne by the Defense Department alone.”…“Even if the United States withdraws completely from the major war zones by the end of FY2020 and halts its other Global War on Terror operations, in the Philippines and Africa for example, the total budgetary burden of the post-9/11 wars will continue to rise as the U.S. pays the on-going costs of veterans’ care and for interest on borrowing to pay for the wars,” Crawford wrote.” 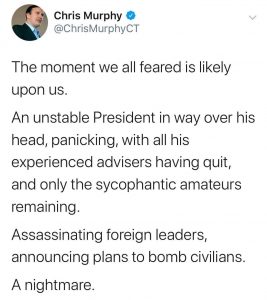 From “It’s not just the polls that show Biden and Sanders leading the primary” by Harry Enten at CNN Politics: “We have less than a month until the primary season, and it’s becoming more apparent that former Vice President Joe Biden and Sen. Bernie Sanders of Vermont are the candidates to beat. It’s not just that they are Nos. 1 and 2 in the national polling. It’s that each holds a lead on the two most important metrics beyond the polling: fundraising and endorsements…Sanders reportedly pulled in about $34.5 million in the fourth quarter of 2019, which makes for a total sum of nearly $100 million over the 2020 campaign. No one else is even close. His nearest competitor (former South Bend, Indiana, Mayor Pete Buttigieg) is closer to $75 million for the year, according to self-reports…Those who lead in fundraising at this point often win. In primaries in which an incumbent is not running in the given primary, 9 of 14 leaders at this point have gone on to win the nomination. Even when a candidate is trailing in the national polls (like Sanders), the leader has won 3 out of 5 times. This includes candidates like Democrat Bill Clinton in 1992 and Republican Mitt Romney in 2012…Dating back to 1980, endorsement leaders at this point have a strong track record of winning primaries. They’ve gone on to win the nomination 10 of 14 times. When a candidate like Biden leads in the polls and endorsements, they’ve won 7 of 9 nominations…And as I have stressed over and over again, early polling actually does a fairly good job of predicting winners and losers. Biden is clearly ahead there, with Sanders a bit behind.”

“If polarization helps Trump,” E. J. Dionne, Jr. writes in his Washington Post syndicated column, “then the opposite follows for progressives. They win only with coalitions that cross the lines of race, place and faith. Democratic candidates need strong support and turnout from African Americans, Latinos and city dwellers. But they cannot prevail in swing states without help from blue-collar and non-college-educated whites…It’s thus a big mistake for progressives to think that their own form of “base politics” is sufficient, and one politician who firmly grasps this is Sen. Sherrod Brown (D-Ohio). He has a lot to teach this year’s Democratic presidential candidates, and he gathered his thoughts in his delightful book, “Desk 88,” published last year.”

FiveThirtyEight has a well-deserved rep for poll analysis. Here’s their update, by Amelia Thomson-Deveaux and Laura Bronner, on the latest polling data on impeachment: “…According to our impeachment and removal polling trackers, there isn’t broad public support for that either — just 47 percent of Americans favor removing Trump…But in the latest installment of our survey with Ipsos, where we use Ipsos’s KnowledgePanel to poll the same group of respondents every two weeks, a majority (57 percent) of Americans said they think Trump committed an impeachable offense. Fifty-two percent said they think Trump’s actions regarding Ukraine or his refusal to cooperate with the impeachment inquiry constitute enough evidence to remove him from office…Consistent with previous rounds of our survey, we found that about 15 percent of Americans think that there is enough evidence to remove Trump from office on matters related to Ukraine or his attempts to stymie the impeachment inquiry, but also think his fate should be decided by voters in the 2020 election, not Congress.”

Thomson-Deveaux and Bronner add, “According to the survey, 57 percent of Americans think it would be better if the upcoming trial included new witnesses who could potentially shed light on Trump’s conduct, while 39 percent said it would be better to keep the focus solely on the evidence introduced in the House hearings and included in the articles of impeachment, without calling new witnesses. Perhaps unsurprisingly, 65 percent of Democrats support calling new witnesses in the Senate trial. But 48 percent of Republicans also support calling new witnesses — although about the same number still want the trial to proceed with only the evidence introduced in the House hearings (50 percent)…The survey also found that Americans are divided on House Democrats’ current strategy of refusing to transmit the articles of impeachment until their concerns around a fair trial have been addressed. Roughly half of Americans say the Democrats should not wait to deliver the articles of impeachment, compared with 45 percent who say they should withhold the articles”

Also at FiveThirtyEight, Geoffrey Skelley explores “What Decades Of Primary Polls Tell Us About The 2020 Democratic Presidential Race,” and concludes “But having examined all the national polls from the last six months of 2019, the bottom line is that, at this point, Biden remains the favorite to win the Democratic nomination. That said, his grasp on the lead is tenuous. For instance, when thinking about Biden’s odds, it’s important to remember that the historical data suggests that the rest of the Democratic field combined has a larger chance of winning than Biden does on his own — 44 percent for all of the other candidates still in the race compared with Biden’s 35 percent shot.2 And this uncertainty around Biden as the front-runner lines up with what else we know about the race — Biden, Buttigieg and Sanders are fighting for the lead in Iowa while Biden and Sanders are neck-and-neck in New Hampshire, and Biden raised less money than either Sanders or Buttigieg in the final quarter of 2019. So as we jump into the new year and brace ourselves for the first two nominating contests, remember that Biden has the best chance of winning his party’s nomination, but it’s also quite possible that someone else will be facing off against President Trump this November.”

At The Atlantic, Ronald Brownstein writes, “”On the whole, polls suggest that the 2020 election will closely track 2016, with small changes among key groups potentially tipping the result. Democrats hope that revulsion at Trump’s behavior will help them make gains with traditionally Republican-leaning blue-collar white women and college-educated white men, and further boost their margins with college-educated white women, who have left the GOP in droves. Republicans believe that the strong economy and Trump’s swaggering style will lead them to make small gains with Hispanic and African American men, suppress any defections from the working-class white women who backed him in 2016, and prompt greater turnout among the party’s base….”Trump’s persistently low approval rating—he is the only president in the history of Gallup polling never to crack 50 percent at any point in his tenure—means he faces an uphill climb to win the popular vote. But he could still squeeze out another Electoral College victory without it. Like in 2016, the election will likely hinge on just a few states that could be decided by very small margins: Pennsylvania and Michigan, which both polls and the 2018 election results suggest lean slightly toward the Democrats; Florida and North Carolina, which lean toward Trump; and Wisconsin and Arizona, which sit precariously at the absolute tipping point between both parties…Republicans think they cansqueeze out larger margins from shrinking groups; as a long-term strategy, that’s a dicey proposition. But it could prevail in the near term, especially since both the Electoral College and the Senate benefit small states that remain mostly white and Christian.”

In his article, “Have Democrats Found Their ALEC? The party has long pined for a nationwide network for state-level legislation. One group is finally succeeding where so many others have failed” at The New Republic Alan Greenblatt reports on a pro-Democratic group that is primed to help Dems win back control of state legislatures: Former Obama staffer Nick Rathod accepted the challenge and “built SiX out of the ashes of three prior progressive groups. “There’s a reason the right has been able to define policy,” he told me. “They’ve been doing it at the state level for so long.” (Jessie Ulibarri, a former Colorado state senator, took over the reins in 2018.)…As it has grown, SiX has honed its approach by embedding much of its staff in individual states and focusing on a limited number of issue areas, such as reproductive health and voting rights. Even where progressives can’t write the laws, SiX helps them gather data in an effort to shape policies in areas that don’t always capture headlines, such as maternal mortality rates. “Its mission really did fill a void,” said Ohio state Representative Stephanie Howse. “There is no basic school in how to be a legislator, in making policies, and even how to build a network.”…SiX’s materials now go out to more than 3,000 legislators or staffers, while its own staff has grown from 10 in 2017 to 27 today. The group has a $6.5 million budget, dwarfing the size of earlier groups that have fallen by the wayside—but still short of ALEC’s $10 million in annual revenue.”…“One of my biggest fears is that if we do take the presidency, and hopefully we do, things go back to the status quo: ‘Let’s just forget about the states again,’” Rathod said. “If the left is serious about long-term power-building and having political power in the country, they better not do that.”