In his year-ender, “2019: The Year of Stability: Big events of the year, including impeachment, don’t materially change the odds in races for president, Congress,” Kyle Kondik concludes at Sabato’s Crystal Ball that “despite all of the big political events of the past year, the overall political picture for November 2020 has not changed all that much. The presidential race remains in flux, and the two parties — Republicans in the Senate, Democrats in the House — retain various advantages as they seek to maintain their respective congressional majorities.” Overconfident Democrats should take note that the final Electoral Votes forecast by Kondik and the Crystal Ball for 2019 sees a dead-even 248 EV tie, with 42 toss-ups. 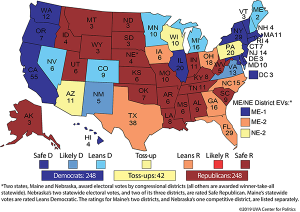 As for the 2020 U.S. Senate races, “Our best guess at this point would be for something like a net Democratic gain of a seat, short of the three net seats Democrats need to forge a 50-50 tie. So we still favor the Republicans overall in the battle for the Senate, but the Democrats have enough targets to win control. The map: 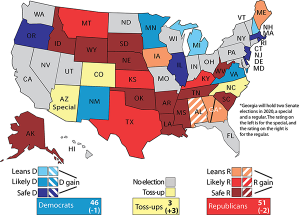 All in all, Democrats are in good position to win a 2020 trifecta.

At Vox, Matthew Yglesias highlights the weak, even-for-Republicans, health care policies of Trump and Co, which should be a major asset for Dems willing to call them out: “Trump really does not want to talk about his record on health care. On most topics at hand, Trump’s team has something — whether true or not — to say in favor of the Trump administration’s policy initiatives…The argument is entirely negative — Democrats are bad; Medicare-for-all is bad…Trump can’t really tout his priorities. Over the past three years, he has pursued policies that would reduce the number of people who have health insurance and the quality of the insurance enjoyed by the insured.” Yglesias notes that  Republicans are reduced to arguing that reading, understanding and doing Medicare paperwork is more tedious than doing so for insurance companies, which is a very tough sell, to put it generously. “Personally,” Yglesias observes dryly, “it has not been my experience that filing reimbursement paperwork with Cigna is a notably superior customer service experience to what’s provided at the Department of Motor Vehicles.” In conclusion, Yglesias notes that “the uninsured rate in America is actually rising even though the labor market is getting stronger — a clear sign that health care remains an important policy area that won’t be fixed just by good generic economic conditions. And it’s a policy area where Trump is pursuing priorities — less insurance — that his own team has no defense for.”

Robert Alexander, author of “Representation and the Electoral College, argues “The case for letting senators vote secretly on Trump’s fate” at CNN Opinion. It’s probably not gonna happen, barring an overwhelmingly disgraceful revelation, such as a video clip of Trump stealing the White House silverware, and then fencing it a pawnshop. And even then, who knows, given the fact that ripping off charities and paying fines for it has not budged his approval rating.  Alexander believes that Republicans would then be free to vote their consciences, and he cites Jeff Flake’s dicey claim that a yuge majority of Republican Senators would dump Trump. Not likely – the media and their constituents would pester the GOP senators mercilessly to find out how they voted, putting pressure on all 53 of them to stay mum in perfect harmony with zero staff leaks. It’s a stretch for a party now raging that whistle-blowers should be outed to then say that their impeachment trial vote should be secret. In any case, Dems need not lead the charge. That’s a project for trembly Republican Senators and the media. Looking toward November, Dems should make them publicly defend a president, not only for the two impeachment charges, but also for his whole rap sheet.

Speaking of whistle-blowers, Trump may have just added to the impeachable offenses on his rap sheet, as Laura Davison reports at Bloomberg:  “President Donald Trump faces criticism from political opponents — and queasiness even among some supporters — for naming the alleged whistle-blower whose complaint triggered the congressional inquiry that resulted in his impeachment…A retweet late Friday to Trump’s 68 million Twitter followers identified a person it says is the whistle-blower. That could run afoul of two laws, said David Colapinto, a lawyer who represents whistle-blowers at law firm Kohn, Kohn & Colapinto LLP in Washington…Trump’s Twitter move, while a retweet and not an original message, could potentially run afoul of two sets of laws, one protecting whistle-blowers in the intelligence community and another portion of the criminal code that protects confidential informants from retaliation.”…“By making public the unsubstantiated name of the whistle-blower Trump encapsulated the pathology of his presidency — a callous and cruel disregard for the well-being of anyone or anything untethered from his own personal needs and interests,” tweeted Aaron David Miller, a senior fellow focusing on foreign policy at the Washington-based Carnegie Endowment for International Peace, and a former State Department analyst.”

Democratic supporters of both front-runners for the presidential nomination should appreciate Zach Budrick’s article “Biden hits back at Sanders’s claim that Trump ‘will eat his lunch‘” at The Hill. “If you’re a Donald Trump and you got Biden having voted for the war in Iraq, Biden having voted for these terrible, in my view, trade agreements, Biden having voted for the bankruptcy bill. Trump will eat his lunch,” Sanders said in an interview with the Los Angeles Times editorial board last week…Sanders went on to claim that Biden’s health care plan would keep the “status quo,” which Biden denied. Biden’s plan, in contrast to Sanders’s universal “Medicare for All” proposal, would create a public option similar to the one floated but ultimately left out of the Affordable Care Act.” No matter who wins the Democratic presidential nomination, he or she will be strengthened by engaging other candidates in tough, but respectful debate, which Dems have done well in 2019, despite the hand-wringing about circular firing squads. Trump won’t have that advantage, since some states won’t even hold GOP primaries and his most ‘serious’ opponent, William Weld, doesn’t seem much interested in fighting for his party’s nomination. If you’re a Biden supporter, be grateful that your candidate is working out with Bernie Sanders, and vice versa. Same goes for all of the Democratic candidates who address tough ctiticism.

One of the casualties of the 2016 election was the myth that the home state of presidential candidates matters much, since hard-core New Yorker Trump swept the south (except VA). The regional roots of voters, however, still matter — a lot. As Frank Hyman, a carpenter and stonemason, who also does policy analysis for ‘Blue Collar Comeback,’ noted in his Richmond Times-Dispatch article, “The Confederacy was a con job on whites. And still is” (reprinted in a dozen newspapers) that “a map of states that didn’t expand Medicaid – which would actually be a boon mostly to poor whites – resembles a map of the old Confederacy with a few other poor, rural states thrown in. Another indication that this divisive propaganda works on Southern whites came in 2012. Romney and Obama evenly split the white working class in the West, Midwest and Northeast. But in the South we went 2-1 for Romney.”

Yet today there are exciting pro-Democratic developments across the south, including the blue-ing of Virginia and progressive trends underway in NC, GA, FL and even TX. Democrats now hold a U.S. Senate seat in AL and the Governorships of NC and LA, and nearly elected governors of FL and GA in 2018. In addition, most of the largest southern cities have Democratic mayors. At Facing South, Chris Kromm reports that “Florida and Louisiana recently passed measures that expand voting rights for citizens with former felony convictions, and incoming Kentucky governor Andy Beshear is reportedly considering an executive order that would reenfranchise 100,000 voters. [Done] Georgia has adopted automatic voter registration. Texas has strengthened campaign finance disclosure rules.” However, Republicans still control all southern state legislatures outside of VA.