At The Cook Political Report, David Wasserman writes that “Democrats Are Making Big Gains in the Suburbs. Here’s Why That May Not Be Enough to Beat Trump” and notes: “The continued migration of highly college-educated suburbs away from Republicans in the Trump era is welcome news for Democrats. The Kentucky and Louisiana results are a continuation of midterm gains for Democrats in places like the suburbs of Dallas, Houston, Phoenix, Charleston and Oklahoma City…However, robust turnout in more rural parts of Kentucky and Louisiana is a silver lining for Trump. More critically, Democratic gains among suburban college-educated whites — and relative stagnation among other voters — could actually widen Trump’s advantage in the Electoral College relative to the popular vote…Of the dozen states where college graduates make up over 40 percent of all eligible white voters — California, Colorado, Connecticut, the District of Columbia, Hawaii, Illinois, Maryland, Massachusetts, New Jersey, New Mexico, New York and Virginia — none are likely to be decisive in the race for the Electoral College…In other words, unless Democrats are able to retain support among other groups in states like Michigan, Pennsylvania and Wisconsin, they risk further adding to their vote-wasting problem in 2020, which could allow Trump to win re-election while losing the popular vote by 5 million or possibly more.”

Grace Sparks reports at CNN Politics that, “A CNN/Des Moines Register/Mediacom poll in Iowa finds that a majority of likely Democratic caucusgoers would prefer a health care option that isn’t “Medicare for All.”…About a third (36%) want Medicare for All while another third (34%) want to create a public option for buy in and 20% would prefer to restore lost provisions from the Affordable Care Act and work incrementally from there…Together, a majority (54%) would prefer an option that isn’t Medicare for All, while only 36% prefer the more liberal alternative…Likely Democratic caucugoers ages 65 and over are the most interested in restoring the lost ACA provisions through incremental work (34%), though they are still split between restoring Obamacare provisions and creating a public option (35%).”

“The genius of the civil rights movement of the 1960s is that it really did bring home the nature of racial injustice in our country,” E. J. Dionne, Jr. writes in his syndicated WAshington Post column. “The Great Recession and the agitation of Occupy Wall Street and other groups altered the way we discuss economic inequality. The feminist movement transformed the way we think about gender roles, while the movement for LGBTQ rights revolutionized our view of sexual identity. The students of Marjory Stoneman Douglas High School shifted the debate about guns in fundamental ways…I doubt all this history was going through House Speaker Nancy Pelosi’s mind last Thursday when she wheeled around in anger after James Rosen of the right-wing Sinclair Broadcast Group asked her, “Do you hate the president, Madame Speaker?” But the larger lesson of the American story certainly was.  Her answer brought cheers from her admirers, especially from liberal Catholics who were buoyed by her insistence that “as a Catholic, I resent your using the word ‘hate’ in a sentence that addresses me. I don’t hate anyone.” It was bracing to see Catholicism invoked as a call to Christian love and prayer — especially for Trump.’

“But Pelosi was on to something else as well,” Dionne continues. “She knows that Trump’s apologists want to keep the focus on the motives of the president’s opponents and to make this battle about nothing more than partisanship. Those who would let Trump get away with anything want us to talk as little as possible about his own behavior. Their claim is that it’s all about identity — the president’s big-city, liberal, Christian-hating, elitist, immigrant-loving, politically correct enemies vs. his hardworking, religious, gun-rights-defending, taxpaying friends who live in small towns and the countryside…Pelosi’s invocation of her faith was one way to blow up this narrative, but her care in separating out her political disagreements with Trump (on immigration, guns and climate change) from the reasons for impeachment (his abuse of power and constitutional violations) reflected an awareness that opinion about impeachment is still fluid. Yes, there is room for persuasion.”

Dionne adds, “An analysis by FiveThirtyEight, for example, suggested that about a quarter of Americans were not yet certain about their view of the matter. And those who oppose impeachment appear more open to revising their view than those who support it. A Quinnipiac University survey last month, for example, found that 17 percent of those who were against impeaching Trump and removing him from office said they could change their minds; only 8 percent of those who support it said they might change theirs…This means that those who see impeachment as a moral imperative need to avoid playing to their own gallery and should fight rather than reinforce the culture-war narratives Trump is counting on…It’s not surprising that many among Trump’s foes are obsessed with impeachment news, but they must recognize that those who might eventually come their way are not: In the Quinnipiac survey, 21 percent of those who did not watch the hearings said they could change sides, compared with only 11 percent who did.”

In The American Prospect’s special issue addressing the climate crisis, Robert Kuttner highlights the strategic merits of progressives “front-loading” needed environmental reforms: “Ideally, we should have reached zero fossil fuel extraction and combustion years ago. Ideally, all fossil fuel operations should be shut down immediately. We can demand that, but we can’t will it into happening. As the lead article by Jeffrey Sachs and the discussion of emerging technologies by Mara Prentiss explain, we can in fact get to zero carbon a lot faster and with a lot less economic cost than the naysayers contend, and even faster if we get the politics right. Prentiss demonstrates that most of the needed technologies are available now. Our special issue taken as a whole shows that a Green New Deal can be achieved…As Jeff Faux’s piece recounts, we are asking citizens to trust their government to launch an initiative at a massive scale at a moment when trust in government and in all large public systems is at an all-time low. Today, that mistrust is all too appropriate, given the Trump presidency. Yet, as Faux observes, the very process of having highly visible projects that improve people’s lives can cumulatively rebuild public trust. These projects, however, will need to be somewhat front-loaded, to demonstrate benefits in the new administration’s first two years. Otherwise, a new president with grand promises and scant results could suffer the fate of Bill Clinton, whose party lost a record 54 House seats for a Democrat in 1994—until that record was broken in 2010, when Barack Obama’s party lost 63 seats. Notably, the only Democratic president to avoid that midterm curse was Franklin Roosevelt, who managed to deliver a great deal in his first two years. The voters reciprocated by increasing his Democratic majority in 1934 by nine seats in the House and nine in the Senate.”

From “Voters’ Second-Choice Candidates Show A Race That Is Still Fluid” by Geoffrey Skelley at FiveThirtyEight: 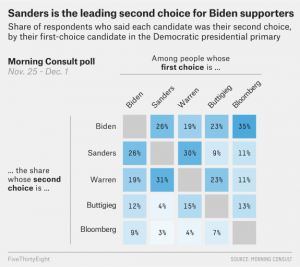 Kyle Kondik’s assessment of the current status of the presidential campaign at Sabato’s Crystal Ball: “It’s too early to tell for 2020. The ingredients are there for a Democratic disaster. But the ingredients are also there for a victory next November. Nothing’s carved in stone…The Democratic delegate allocation rules must remain front of mind. All delegates are awarded proportionally, although 15% or greater support is required to win delegates. In crowded contests, there may be at most just a few candidates who get delegates. The lack of winner-take-all delegate allocation could prompt the process to drag out into June of next year, or maybe even to the convention. If no one achieves a majority of the delegates on the first ballot — something that hasn’t happened in a national party convention since 1952 — party leaders will become formally involved in the process as “superdelegates,” who are effectively sidelined under new Democratic rules unless the convention deadlocks. In such a scenario, the potential for bad feelings among the supporters of the losing candidates rises…For the general election, it isn’t just who is chosen as the Democratic nominee. It’s how he or she is chosen, how damaged the nominee is from the process, and how fractured the party is once it’s over. Democrats being Democrats, some will be off sulking for a while. And some primary voters may disappear in the fall: It’s easy to imagine some supporters of the outsider candidates, most notably Sanders, Rep. Tulsi Gabbard (D, HI-2), and entrepreneur Andrew Yang, falling by the wayside, even if the candidates themselves dutifully get behind the eventual nominee…Still, Trump is a great unifier for Democrats, and that effect will kick in come fall, maybe even summer. We still see the general election as basically a 50-50 proposition, which is reflected in our early Electoral College ratings.”

Maresa Strano and Lydia Bean explain “How Red States Are Steamrolling Blue Cities” by enacting state preemption laws. Writing in The Washington Monthly, Strano and Bean note that “the last decade has seen an unprecedented swell in the number of preemption bills introduced and passed by state legislatures. As of 2019, twenty-five states have passed laws preempting local minimum wage ordinances (up from ten states in 2010). Twenty-three states have banned ordinances requiring paid sick days (up from one state in 2010). Between 2014 and 2019, an astounding forty-four states removed or prevented employment and labor protections for Uber and Lyft drivers…Some of these laws are notorious. North Carolina’s House Bill 2, or “the Bathroom Bill,” famously mandated that individuals use the bathroom corresponding to the gender assigned to them at birth. A direct attack on the transgender community, HB 2 was passed to stop the City of Charlotte from increasing its anti-discrimination protections. The same bill also explicitly preempted local regulation of employment standards, such as increasing the minimum wage and mandatory paid sick days…The increase in volume, sweep, and frequency of preemption laws is hardly driven by grassroots concerns. Instead, it reflects a pattern in which industries have used preemption to promote their putatively pro-business, anti-regulation agendas with no regard for public health and safety, nor the public will. They have found happy advocates in the American Legislative Exchange Council (ALEC), an organization bankrolled by industry lobbyists that drafts conservative state legislation and shares it across the nation. ALEC provides the templates for many of the preemption bills circulating today. A recent report from the Local Solutions Support Center and State Innovation Exchange noted that about one in five of the over 1,000 ALEC bills introduced each year are signed into law…Preemption has skyrocketed under Republican state dominance. But now that the genie is out of the bottle, it’s reasonable to expect Democrats to use it…But ultimately, the best solution is to elect state officials who respect local authority. As we head into the 2020 state legislative election cycle, remember that redistricting is not the only reason to pay attention to state politics. Preemption is also on the ballot.”