At The Virginian-Pilot, Dave Ress and Marie Albiges set the stage for tommorow’s election in their state: “The battle for control of the Virginia General Assembly will be largely fought in Hampton Roads on Tuesday. And the question of which side wins will have a lot to do with what kind of laws on guns, voting, abortion and consumer protection Virginians will come under — as well as whether the state ratifies the Equal Rights Amendment and allows people to smoke marijuana without risking jail…Some two decades of GOP control of the House of Delegates would end if only two districts change. A switch of only one seat in the state Senate would mean a Democratic-controlled body, thanks to Lt. Gov. Justin Fairfax’s tie-breaking vote — and that would mean that Democrats hold the governor’s office and both chambers in the General Assembly for the first time since 1993…Stakes are especially high in those districts that were deemed racially gerrymandered by the U.S. Supreme Court earlier this year. The new court-ordered maps made several districts, including a handful in Hampton Roads, more competitive — and often Democratic…But that bluer tone is based on previously federal and statewide election results, said Quentin Kidd, a political scientist at Christopher Newport University…“There’s a lot of difference between a 72% presidential turnout and what’s likely to be a 37%-ish off-off year,” he said, adding that low turnout elections tend to see a larger proportion of GOP-inclined voters showing up to at the polls.”

From “Democrats push candidates to fully commit to 2020 nominee” by CBS News/Associated Press: “The Democratic National Committee is increasing pressure on its presidential candidates to commit to campaign actively for the party’s nominee in 2020, going beyond a previous loyalty pledge for White House hopefuls…The push from Chairman Tom Perez is part of a wide-ranging strategy designed to prevent the mistakes that cost Democrats the 2016 presidential election. It comes as the Republican National Committee continues to dwarf the Democratic Party in fundraising, while Democrats face the prospect of a bruising, expensive nominating fight that could last well into election year…Perez is asking all candidates to commit, like Obama, to serve as surrogates, with a focus on battleground states in the weeks after the July 13-16 nominating convention in Milwaukee. And Perez wants each campaign, as candidates drop out, to designate a senior adviser to serve as a liaison to help the national party use the vestiges of individual candidates’ campaigns to build out Democrats’ general election campaign.”

Democratic President Harry Truman had one of the best responses to the GOP’s socialist boogeyman hysteria: 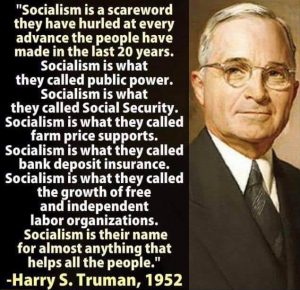 “Florida Democrats are determined not to make the same mistakes as 2016, which could have contributed to President Donald Trump’s victory in the state,” Janelle Irwin Taylor reports in “Florida Democrats outline strategy to take down Donald Trump in Florida” at floridapolitics.com. “The state party has already raised $5.2 million for its campaign to defeat Trump and has assembled a team of 91 employees — the largest team in the nation and equal to both the Trump Florida campaign and Republican Party of Florida staff combined, according to Rizzo…The party hopes to register 200,000 new voters in Florida by July and has already registered 17,000 since June, out-registering Republicans four months in a row for the first time in three years. The state party has grown its volunteer base more than 1,200 percent over its 2015 levels, completing more than 34,000 volunteer shifts this year…The Florida Democratic Party has already spent more than $500,000 on paid media targeting African American and Hispanic voters and 60 percent of its organizers are minority with more than half speaking two or more languages including Spanish, Portuguese and Creole…One of the party’s key targets is reducing voter suppression. To do that, the state party has established a 24-hour voter protection hotline where voters can report troubles registering or voting…In October alone, the Florida Democratic Party registered nearly 5,000 new voters, over 1,600 more voters this year than four years ago…The party is also working to combat disinformation from the Trump campaign. The party’s volunteer base is growing to help meet that need. In the October preceding the 2016 election, Democrats in Florida logged just 109 volunteer shifts. This month, nearly 7,000 volunteer shifts have been filled.”

In his New York Times column, “Democrats Can Still Seize the Center: And they don’t have to give up their principles to do it,” Thomas B. Edsall writes: “In September, the Kaiser Family Foundation and the Cook Report released a study of 2,402 adults designed to identify the swing electorate. They found that 16 percent of all voters “are truly persuadable.”…Who are they? “They’re younger, more moderate, and less engaged in national politics. At least a quarter say they didn’t vote in 2016 or 2018.” Their views of Trump are less extreme than those of more partisan voters, with the overwhelming majority saying they “somewhat” approve or disapprove of the president, rather than “strongly” approve or disapprove.” Edsall quotes an anonomous Republican pollster, who notes, ““The Democratic candidate should concentrate on persuasion, because Trump will take care of mobilizing his opponents,” he argued. The pollster pointed out that in the 2017 Virginia governor’s race, “Northern Virginia turnout exploded by 500,000 votes, because people turned out to send a message of opposition to Trump” even though the Democratic candidate for governor, Ralph Northam, “was neither very liberal nor a very inspiring candidate.”

Regarding Sen. Elizabeth Warren’s cost estimates for the Medicare for All program she is proposing, Ronald Brownstein writes at The Atlantic “The biggest question surrounding Elizabeth Warren’s new Medicare for All plan isn’t whether she has produced a plausible pathway to raising $20.5 trillion over the next decade to fund it. Rather, the biggest question is whether $20.5 trillion is actually a plausible estimate of how much her plan would cost…In estimating the plan’s price tag, the Warren campaign used as its baseline a recent Urban Institute study that projected a 10-year federal cost of $34 trillion. The campaign released a 28-page white paper, with copious footnotes and appendixes, explaining how it reached its lower estimate. It was written by Donald Berwick, the former director of the Centers for Medicare and Medicaid Services under Barack Obama, and Simon Johnson, the former chief economist of the International Monetary Fund…The bottom line is that across all sectors of the medical industry, the Warren campaign assumes that her single-payer plan will squeeze much greater savings relative to the current system than the Urban Institute believes is possible—or, in some cases, even desirable. “We thought we were being pretty aggressive in the assumptions we are making in terms of lowering the cost of the program over time,” Linda Blumberg, a co-author of the Urban Institute study, told me. “They were clearly more aggressive.”

Brownstein concludes “Even with a $20.5 trillion price tag, Warren’s single-payer plan would represent an increase of more than one-third in total federal spending over the next decade. But holding down the cost even to that level would require, as Blumberg said, “heroic” assumptions about how much savings could be squeezed from every corner of the health-care system. Warren’s plan, by her own projections, would require the federal government to raise nearly 90 percent as much new revenue as the total projected receipts from the federal income tax over the next decade. Without those “heroic” savings, she’d need to raise even more—and likely move beyond the targets for tax increases that she’s identified so far.” In the next televised debate, Warren should expect a deluge of harsh zingers from her Democratic opponents, who have a couple of weeks to hone their attack messages. One problem is that, even if she is right, the funding of her Medicare for All plan is complicated to explain in the short time frames allotted, and it’s hard to imagine how she can pull it off in a convincing way. But it’s also possible that her opponents overdo their attacks and end up looking like Republicans.

In their Politico post, “The surprise voting bloc Bernie is banking on to win the nomination,” Laura Barron-Lopez and Holly Otterbein report that “Latino activists say they hear all the time from voters in their community who are high on Sanders, and that’s backed by polling showing him leading or tied among Latinos. Sanders won the highly coveted endorsement of Alexandria Ocasio-Cortez…Sanders is tied for first place with Biden in Nevada at 22 percent, according to the latest CNN poll. And even as he’s slipped to third and fourth place in Iowa in some surveys, Sanders is in a three-way tie with Biden and Elizabeth Warren in California, per an October Public Policy Institute of California survey.,,Several surveys have shown Sanders and Biden as the top choices among Latinos. In a Univision survey of Latino primary voters released in September, Sanders and Biden were statistically tied with 20 percent and 22 percent, respectively. Sanders, who has vowed to put a moratorium on deportations, was the No. 1 choice in that survey among Latino Democrats who know someone who is an undocumented immigrant.”

Otterbein and Barron-Lopez continue, “To win, Sanders needs to persuade Latinos who rarely or never vote to come out for him, too…It’s a tall order: In past presidential elections, Democrats have tried but failed to boost turnout among Latinos. Latino voters were touted as a sleeping giant in the lead-up to the 2016 election. But just 47.6 percent of the Latino electorate came to the polls that year, compared to 48 percent in 2012, according to Pew. Turnout overall was just over 61 percent…But next year might be different for Latinos, or so Sanders’ campaign hopes. Latino voter turnout jumped from 27 percent in the 2014 midterms to 40 percent in 2018 — increasing more than any other ethnic group, according to U.S. Census data…Sanders’ star support from prominent Latinas “gives him barrio cred, street cred for this old white Jewish dude who is running for president,” said Domingo Garcia, president of the League of United Latin American Citizens.”