Does American labor have an image problem? Dylan Scott writes at Vox: “A new Gallup poll finds support for unions is about as high as it’s been in 50 years, but while that is surely welcome news for labor leaders, that favorable opinion hasn’t necessarily translated into any expansion in their ranks…It can be remarkably difficult to form a labor union in the United States, particularly in places like the Republican-led states that have sought to restrict collective bargaining rights with “right to work” laws in recent years; corporations are also inherently hostile toward them…Still, politically, labor has clout and goodwill in an era defined by income inequality. The leading Democratic presidential candidates — Sen. Bernie Sanders (I-VT), Sen. Elizabeth Warren (D-MA), and former Vice President Joe Biden — foreground the value of work and workers in their messages…In doing so, they are picking up on something real: The public’s approval of labor unions had fallen below 50 percent in 2009, but Gallup has found it now sits at a healthy 64 percent following the worst crisis of confidence for the labor movement in a generation.” 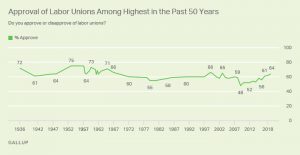 At The Monitor, Mark Trumbull writes, “In the coming presidential election organized labor looks set to wield influence in a way that never really happened in 2016…Despite setbacks in court and federal policy, unions have scored some wins in grassroots organizing and in state and local policies. And unlike in 2016, they are pushing for more than just lip service from any candidate that hopes to win their endorsement – prompting a flurry of pro-labor proposals from Democratic candidates…“Kitchen-table economics are first and foremost” in the race for the Democratic presidential nomination. AFL-CIO president Richard Trumka said Thursday, at a Monitor Breakfast with reporters in Washington. Americans “want somebody who’s going to change the rules of the economy to make the country work for workers.”

Trumbull continues, “At least one change is that candidates on the left have begun rolling out more detailed plans than in the past, focused on worker empowerment…Mr. O’Rourke, for example, has come out with a set of proposals designed to bolster unions…Sen. Elizabeth Warren of Massachusetts has an “accountable capitalism” agenda that would make workers a significant force on corporate boards, among other things. ..Sen. Bernie Sanders of Vermont recently laid out proposals that include radically changing the playing field, so that worker empowerment doesn’t hinge on gaining representation one employer at a time. His idea is to “establish a sectoral collective-bargaining system that will work to set wages, benefits and hours across entire industries, not just employer-by-employer…Similarly, Mayor Pete Buttigieg of South Bend, Ind., has embraced “multi-employer” bargaining, and stood alongside Uber drivers in California this month, arguing for union representation in so-called gig jobs where workers are often classified by companies as contractors rather than employees.”

Steven Greenhouse’s “The Worker’s Friend? Here’s How Trump Has Waged His War on Workers” at The American Prospect provides some useful insights for Democrats seeking to win working class support. Greenhouse, author of “Beaten Down, Worked Up: The Past, Present, and Future of American Labor,” writes. “Yes, it is perplexing to many of us that so many workers are still wowed by President Trump even when his administration has rolled back overtime protections for millions of workers and made it easier for Wall Street firms to rip off workers’ 401(k)s (to cite just two of many such actions)…A labor leader recently explained to me, with considerable dismay, how Trump performs his magic on workers. Day after day, Trump pounds and pummels China over trade, and his macho trade war often dominates the headlines. That, this labor leader said, convinces many workers that Trump is their guy: While previous presidents refused to stand up to China, he alone has bravely launched this trade war to make sure that China stops cheating America—and American workers. The media trains its spotlight on this trade war day after day, while paying scant attention to the continuous stream of anti-worker and anti-union actions that Trump and his administration have taken. Not surprisingly, millions of Americans have little knowledge of Trump’s flood of actions undermining workers.”

Forbes Magazine is not the place where you would expect to find a tribute to labor unions. But there you can read Patricia Corrigan’s “On Labor Day, Workers Celebrate The Benefits Of Union Membership,” in which she writes, “In my family, we were thankful for the International Brotherhood of Teamsters. My dad’s wages allowed him to buy our three-bedroom house, splurge on a 1966 Candy Apple Red Mustang and pay to send me to college. He was a longtime union shop steward, and I remember reading his copy of the Teamsters’ contract, which he kept on our kitchen table. As a journalist, I am a proud member of the United Media Guild Local 36047, part of the Communications Workers of America…Even the 170-plus cable car conductors carrying tourists up and down steep hills in San Francisco, where I live, are union members. Roger Marenco, president of the Transport Workers Union Local 250-A in San Francisco, reminds all of us today: “If you like having weekends off, thank the unions for that. If you like working eight hours a day as opposed to 12, 14 or 16, thank the unions for the 40-hour work week. And if you like being paid overtime, unions got you that, too.”..In 2018, the union membership rate among wage and salary workers was 10.5% ( some 14.7 million individuals), about half the rate reported in 1983, the first year comparable data was available. That said, The Conversation, an international journalism site, reported last year that interest in joining a union is at a four-decade high.”

In “The dark side of progress: We’re ignoring the most potent threat to working-class Americans” at The Hill, Glenn C. Altschuler writes: “Americans, it seems clear, want politicians to do something about automation. A survey conducted by the Pew Research Center in 2017 found that, although respondents were divided on whether government should take responsibility for assisting workers displaced by automation, 85 percent of Democrats and 86 percent of Republicans (including 7 in 10 with a high school diploma or less) indicated that automation should be limited to dangerous or unhealthy tasks, even if machines were less expensive and more efficient….one can only hope a substantive public debate about automation will now take place — and that politicians will present proposals to mitigate the threat to the lives and livelihoods of working-class and middle-class Americans, including, for example, a substantial expansion of wage insurance (which is now available under the Trade Adjustment Assistance Act to workers over 50, earning less than $50,000 a year, and negatively affected by imports) paid for by corporations; tax credits for displaced workers; vouchers to be used for re-training; lower barriers to switching jobs; relocation allowances; and increased investments in kindergarten thru college education.”

Nick Lehr interviews Jennifer Silva, author of “We’re Still Here: Pain and Politics in the Heart of America.” Among her observations: “One of the things that was very striking to me was how much distrust there was. Among everyone I interviewed – white, Latino, and black – there was a fierce distrust and hatred of politicians, a suspicion that politicians and big business were basically working together to take away the American Dream. Everyone was very critical of inequality.” Asked why some of her interview sublects voted for Trump, Silva responds, “The general take on Trump was, “We like Trump’s personality, we like his aggressiveness, we like how he doesn’t care about the rules.” Asked, “what’s the biggest obstacle that’s preventing working class voters from organizing en masse?,” she replied, “I think that it’s the absence of what you could call “mediating institutions.” The people in my book have a lot of critical and smart ideas. But they don’t have a lot of ways to actually connect their individual voices. So they don’t have a church group or a club that they would join that would then give them political tools or a louder voice.”

From “How Writing Off the Working Class Has Hurt the Mainstream Media” at Nieman Reports (excerpted from Christopher R. Martin’s 2019 book, “No Longer Newsworthy: How the Mainstream Media Abandoned the Working Class”: “Today there are just six full-time labor reporters in the top 25 newspapers across the U.S., none in network or cable news, none at NPR or PBS, and just a few at digital news organizations and magazines on the left. What happened?…By the late 1960s and early 1970s, newspaper companies, then becoming publicly-traded, bigger chains, moved to a new business trajectory that changed the target news audience from mass to upscale, and altered the actual news narratives about the working class in US journalism. Today, the upscale news audience is the normal objective of news organizations’ marketing efforts. Nearly every mainstream news organization’s media kit claims they have an above-average audience of high-income, highly-educated consumers and influencers…As the labor beat was left to wither, newspapers pursued more upscale readers with workplace “lifestyle” columns featuring the lives of young professionals and their concerns about office gossip, job interview strategy, expense accounts, and office party etiquette…The mainstream news media’s write-off of the working class set the conditions for the decline of labor and working class news and the rise of a deeply partisan conservative media that hailed the abandoned white, working-class audience…People of all races, genders, and political persuasions inhabit the working class, and they exist as real people, not just occasionally visible and selectively cast props for presidential campaigns. But with few exceptions, America’s working class is invisible, deemed no longer newsworthy.”