“Booker was a happy warrior — balancing attacks (primarily against former Vice President Joe Biden) with an optimistic demeanor. Booker spoke powerfully about criminal justice reform and immigration…Booker has considerable natural gifts as a candidate — and they shone through on Wednesday night.” – Chris Cillizza at CNN Politics.

Julian Castro had another very good night. He has a striking personal dignity and seriousness of purpose that should appeal to many voters. But he also showed a talent last night for laser-targeted attacks. As Cillizza noted, “He probably had the line of the night, hitting back on Biden with this hammer: “It looks like one of us has learned the lessons of the past and one of us hasn’t.” Castro was forceful and effective on immigration and really stuck it to New York City Mayor Bill de Blasio on how to handle the officer who choked Eric Garner.”

Here’s what we have to give to the embattled front-runner, according to Time Magazine’s Philip Elliot: “Biden took the lashing and lives to fight on. Advisers had spent the month since the first debate bracing for impact. They knew the aura of inevitability was not going to protect them and told him to anticipate wallops far worse than what Harris offered in Miami. Biden had tweets drafted and ready to go for a number of anticipated attacks, including a thread about that 1981 op-ed. It wasn’t a command performance for the front-runner, but he took incoming from all over the stage and appeared to come away relatively undaunted.”

Nate Silver observed at FiveThirtyEight: “My view at the start of the night was that Booker needed to differentiate himself in a positive way from Harris and I think he did that — not with any particularly interesting strategy or by taking her on directly, but just from being fairly sharp throughout the evening when she was quite uneven. Will it move the polls? I don’t know. I think Harris might be in for a skeptical news cycle or two given that she already has lost a lot of her bounce from the first debate.”

In a night of well-targeted zingers, Rep. Tulsi Gabbard scored a brutal one against Sen. Kamala Harris, with her comment, as reported by Stephanie Saul of the NYT: “Now, Senator Harris says she’s proud of her record as a prosecutor and that she’ll be a prosecutor president. But I’m deeply concerned about this record. There are too many examples to cite but she put over 1,500 people in jail for marijuana violations and then laughed about it when she was asked if she ever smoked marijuana.”

Gabbard had a lot more to say about Harris. But, caught off guard by Gabbard’s attack, Harris did a good job of defending her record, noting that she now supports pot legalization and banning the death penalty. But Harris missed an opportunity to counter-punch during the nationally-televised debate. After the debate Harris called Gabbard “an “apologist” for Syria’s Bashar al-Assad, referring to her meeting with the dictator and previous claims that he’s not an enemy of the U.S..” We can only hope that they won’t squander their respective gifts on a personal feud. Gabbard is an eloquent critic of militaristic foreign policy and Harris provides the Dems’smost blistering take-down of Trump’s litany of abuse.

Sen Gillbrand also had a notable zinger, directed at the GOP’s ‘leader’: “So the first thing that I’m going to do when I’m president — is I’m going to Clorox the Oval Office.” To the relief of envioronmentalists, she followed up with the less toxic, “The second thing I’m going to do, is I will re-engage on global climate change.” 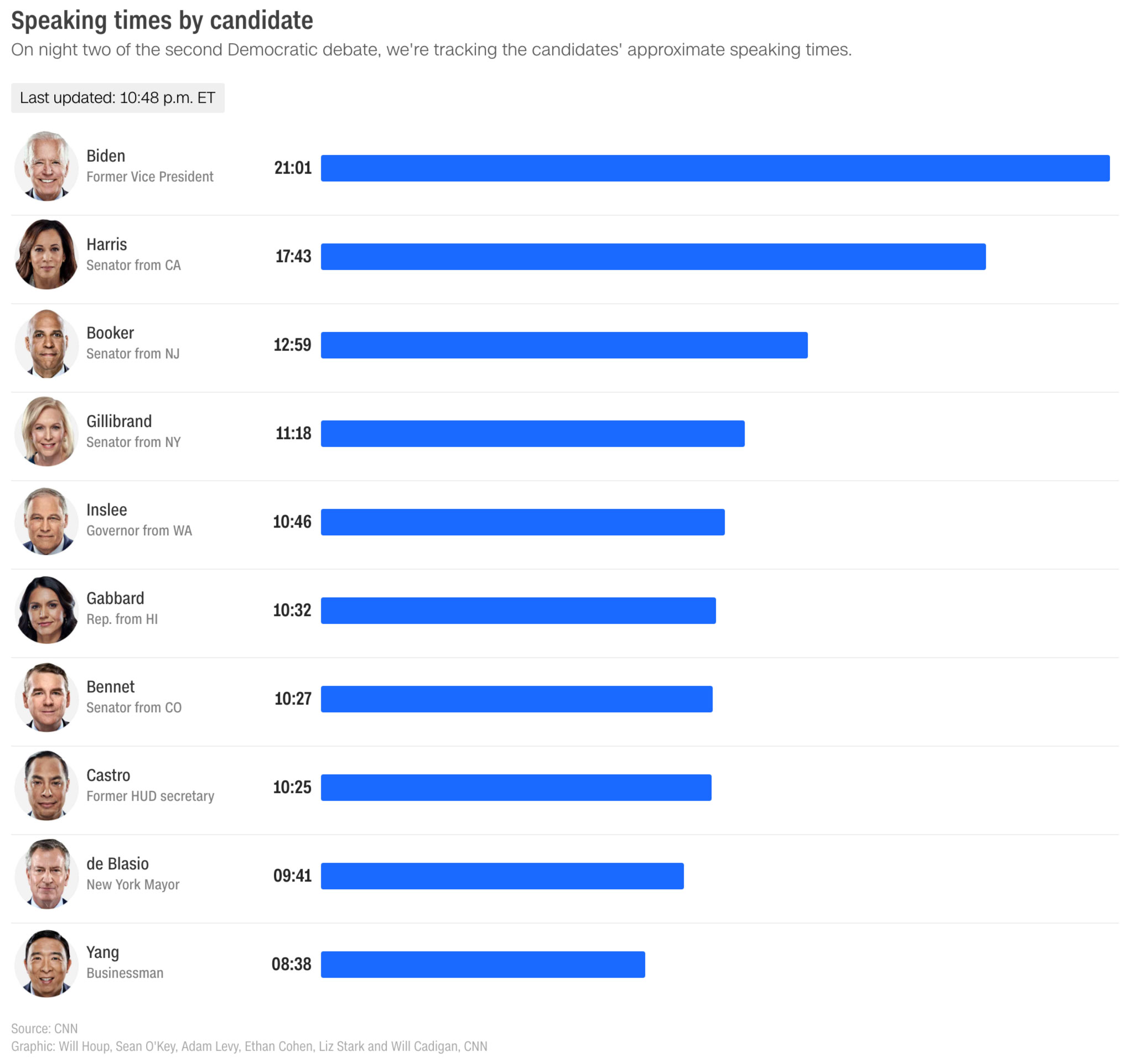 At The Guadian, Art Cullen, editor of The Storm Lake Times, opined: “Front-runner Biden defended his record vigorously, bonded himself to President Obama on civil rights, and reminded viewers of his experience on the world stage. The real winner over two nights: universal healthcare, strongly endorsed by every candidate. It remains the top issue among primary voters. And nothing over two nights appeared to materially interrupt Elizabeth Warren’s steady momentum, while Harris did not have the best night.”

‘Medicare for All’ took its share of lumps during the fourth presidential debate, since it has been creamed in a host of recent opinion polls. Yet, “A pure Medicare-for-all plan is much easier to describe than these complicated plans that try to thread the political needle,” said Larry Levitt, a health policy expert at the Kaiser Family Foundation. “This was a huge problem for the Obama administration in trying to sell the Affordable Care Act,” quoted in 4th debate coverage by WaPo’s Jeff Stein and Yasmeen Abutaleb.

The overlooked Washington Gov. Jay Inslee, who makes as much sense as any of the candidates and has an actual track record to back it up, made an important point in the 4th debate, reported here by Ella Nilsen of Vox: “We are all going to work like the dickens to get more Democrats elected to the Senate. If we get a majority in the US Senate because of the position of these senators, not a damn thing is going to get done,” Inslee said. “And I’ll tell you why, with all their good intentions — and I know they’re sincere and passionate — but because they embraced the filibuster, Mitch McConnell is going to run the US Senate even if we take a majority.”

Don’t be surprised of you start hearing more ‘Warren-Booker’ than ‘Biden-Harris’ buzz, since the Massachusetts Senator had the best night of the 20 candidates, followed by Booker’s impressive performance and that of Sen. Sanders, who has moved the political fulcrum to the left. I will be surprised if they don’t get a substantial lift in the polls over the next couple of weeks. My final take on both nights is that the Democratic presidential field has an embarrasment of riches, a lot of very impressive candidates — Time Magazine called it “the most diverse presidential debate in American history.” I was expecting a let-down after the energetic first debate, but came away from night two with an even better feeling about being a Democrat. This party has a bright future.

One comment on “Quick Takes on the Fourth 2020 Presidential Debate”