Ronald Brownstein explains Trump’s re-election strategy at The Atlantic: “The attempt by the president and his allies to invert the debate about his approach to race captures one of the pillars of his reelection message heading into 2020. They have signaled that, as in 2016, he intends to portray his overwhelmingly white, heavily blue-collar, and nonurban coalition as the real victims in American society. And no issue may offer him a more powerful way to gin up those emotions than insisting that the charges of racism against him—and, by extension, against his core supporters—are themselves a form of bigotry, despite the recent escalation of his rhetoric, most notably telling four Democratic congresswomen of color, all U.S. citizens, to “go back” to the “crime infested places from which they came…Strategists in both parties, along with independent analysts, largely agree that Trump can energize his supporters by insisting that they are the actual victims of bigotry. But by motivating his core voters in that manner, Trump is utterly dismissing the concerns of the majority of Americans who now consistently describe him in polls as racist or racially insensitive. Like so many of Trump’s choices, that means his response to these accusations is likely to energize his base at the price of limiting his capacity to reach beyond it.”

Brownstein adds, “For the Trump coalition, “an important part of their worldview is victimization and being aggrieved,” says the Democratic pollster Cornell Belcher, who has extensively studied attitudes on race relations. “This continues the victimization narrative…“I think the cost is, he doesn’t attract anybody new,” says Lynn Vavreck, a UCLA political scientist and a co-author of Identity Crisis, a book about the role of race in the 2016 presidential election. “And that could be a cost. The man won by 77,000 votes in three states. If African American turnout goes back to the Obama levels, he needs more voters. He could be fighting the last battle.”…In a study of the 2016 election published last year, the Tufts University political scientist Brian Schaffner and two of his colleagues found that the strongest predictor of support for Trump over Hillary Clinton was a belief that racism is no longer a systemic problem. Using results from a large-sample postelection survey called the Cooperative Congressional Election Study, they found that belief dwarfed economic concerns as a predictor of support for Trump. The conviction that discrimination against women is not a problem also proved a more powerful predictor of Trump support than economic concerns, though not as strong a factor as racial attitudes…The denial of racism “was also the strongest predictor of someone switching from an Obama voter in 2012 to a Trump voter in 2016,” Schaffner said.”

Erin Doherty writes at FiveThirtyEight: “ding to a July poll from Gallup, when asked an open-ended question about the most important problem facing the country, just 2 percent of Americans mentioned the “gap between rich and poor,” and this number hasn’t changed much in over a decade, hovering around 2 or 3 percent. (It’s worth noting that since respondents had to come up with their own answers, even 3 percent support means a sizable number of people mentioned this issue without any prompting.) By contrast, Americans’ views of the importance of the economy have tended to fluctuate with the economy’s performance, as you can see in the chart below — in November 2008, for instance, when the country was in the middle of a recession, 58 percent of Americans mentioned the economy as the most important issue facing the country, whereas today, in a relatively good economy, just 3 percent of Americans said the same…another Gallup poll from late June found that seven out of 10 Americans believed that if they work hard, they can still achieve the “American Dream.” That number is roughly unchanged from 2009. In that same poll, 60 percent of Americans also said it’s either “somewhat” or “very” likely that today’s young people will have better lives than their parents, which is close to the highest that number Gallup has recorded (it got as high as 61 percent in both 2008 and 2018).” 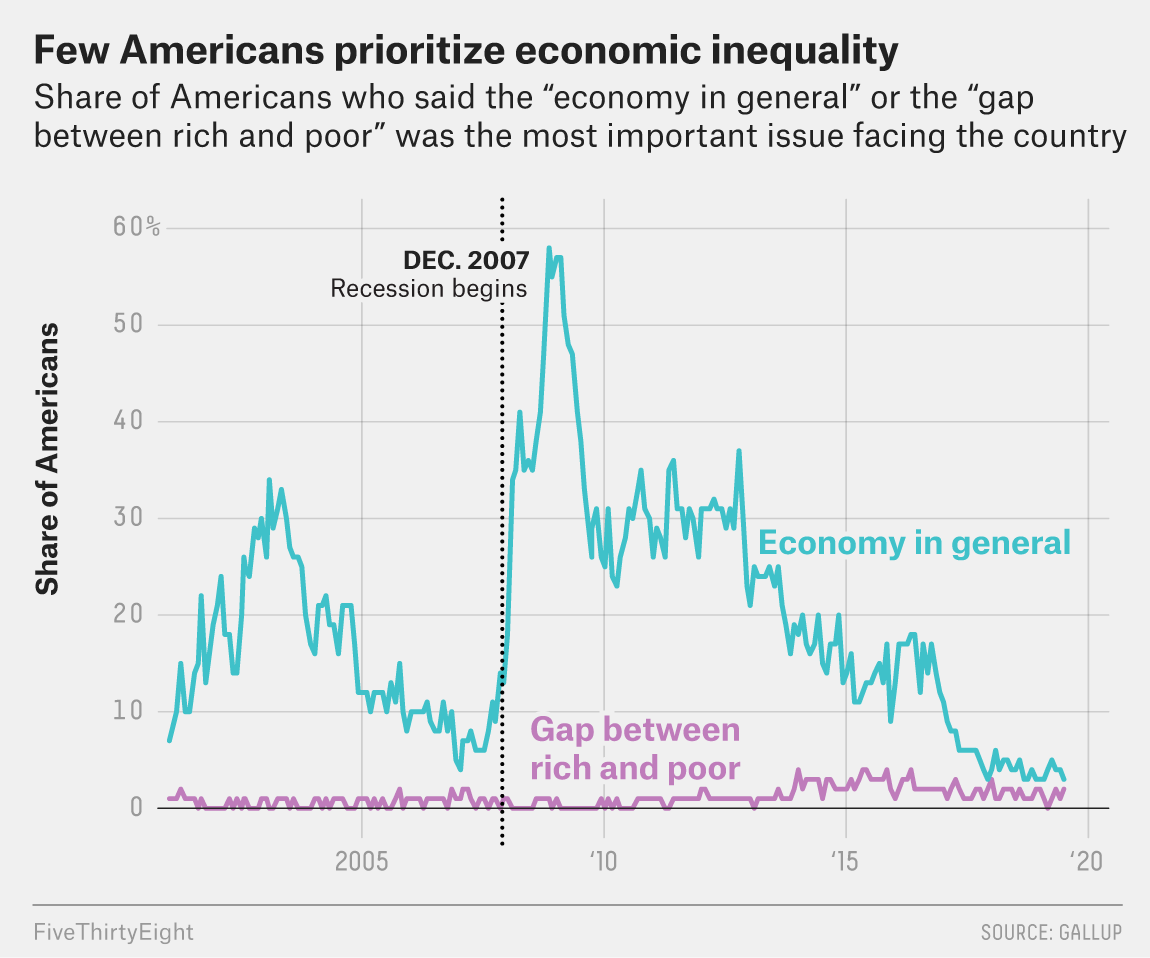 Doherty continues: “Although Americans say socioeconomic inequality isn’t their top priority, many of them support at least one measure that would help close the gap: taxing the wealthy. Many 2020 Democratic candidates have expressed some level of support for raising taxes on the wealthiest Americans, though the details of their plans vary. If candidates tie their messages of socioeconomic inequality to their plans to tax the rich, that approach could appeal to voters…According to Gallup, a majority of Americans — a bit over 60 percent — say that upper-income people pay too little in taxes, and that percentage has remained relatively unchanged over the last 25 years. And polling on specific proposals that hike the tax rate for the wealthy shows that these ideas get support from most Democrats and many Republicans. For instance, earlier this year, Rep. Alexandria Ocasio-Cortez proposed a 70 percent tax rate on every dollar a person earned over $10 million, and a majority of registered voters supported the idea. The proposal got significant support across the political spectrum, with 71 percent of Democrats, 60 percent of independents and 45 percent of Republicans saying they were in favor.”

At Vox, German Lopez has the skinny on “Here’s where every 2020 candidate stands on guns,” and explains that “The candidates agree on universal background checks and an assault weapons ban. There’s less agreement on other proposals.” Lopez notes, further, “Democratic candidates, however, have taken more comprehensive stances on guns. For the most part, they’re sticking to common Democratic themes like universal background checks, an assault weapons ban (which is typically paired with a ban on high-capacity magazines), and federally funded research into gun violence. But the campaigns’ plans do include some new ideas here and there — including red flag laws, which campaigns ranging from Cory Booker’s to John Delaney’s back, and requiring a license to buy and own a gun, which Booker in particular brought to the presidential stage but others, like Elizabeth Warren and Pete Buttigieg, also support…Several candidates, including Booker, Warren, Buttigieg, and Yang, support gun licensing. But others, including Joe Biden, Kirsten Gillibrand, and Michael Bennet, have been critical of it.” Read the article for specifics on each candidate.

In Harry Enten’s “Poll of the Week” at CNN Politics, he notes that, “A new national Fox News poll finds that among black Democratic primary voters, former Vice President Joe Biden is their first choice for the party’s presidential nomination at 37%. He is followed by Vermont Sen. Bernie Sanders at 18%, California Sen. Kamala Harris at 10% and Massachusetts Sen. Elizabeth Warren at 8%…our last three CNN polls (April, May and June) aggregated together reveals that younger black voters aren’t as enthusiastic about Biden’s candidacy as older black voters are…Overall, our last three CNN polls have Biden at 44% among black voters. No one else is anywhere close; Harris is in second at 14%. Biden’s big league advantage in these polls is similar to the Fox News poll…However, Biden’s standing drops to 36% among black voters under the age of 50. This is lower than the 51% he has among black voters aged 50 and older.”

Also at FiveThirtyEight, Dhrumil Mehta reports in is “Poll of the Week” that “Americans Are More Worried About White Nationalism After El Paso: But partisans remain far apart.” Mehta notes that “After the deadly mass shooting at a Walmart in El Paso, Texas, this month, more Americans now describe white nationalism as a serious threat to the United States, according to a new HuffPost/YouGov poll. Compared to the last time the poll asked this question, in March, both Democrats and Republicans in the latest poll were more likely to say that the country was threatened by white nationalism…But the El Paso shooting, in which the gunman told police that he explicitly targeted Mexicans, has not narrowed the partisan gap on white nationalism. HuffPost/YouGov polls have asked about the threat of white nationalism four times in the two years since a neo-Nazi killed a woman by driving into a crowd of counterprotesters at a white nationalist rally in Charlottesville, Virginia, and each time there has been a huge partisan gap in perceptions. If anything, the gap has gotten bigger…”