Kendall Karson reports at abcnews.com: “Following more than six hours of questioning of former special counsel Robert Mueller before two different congressional committees, Democrats and Republicans remain largely splintered on impeaching President Donald Trump, even as nearly half of Americans show little movement on their support or opposition to the move, according to a new ABC News/Ipsos poll…The poll, conducted using Ipsos’ Knowledge Panel, asked Americans about the former FBI director’s testimony Wednesday in consecutive hearings before the House Judiciary and House Intelligence committees…Among those who read, saw or heard about Mueller’s testimony, 47% said it made no difference in their views about impeaching the president…Among Democrats, 48% said they are more likely to support the process of impeachment that could ultimately lead to Trump’s removal from office…Whereas for Republicans, only 3% said they were more likely to support impeachment, 42% said they were less likely… Independents were split, with 26% saying they are more likely to support impeachment and 29% saying less likely.”

In his syndicated column, “Kicking Trump out is the important thing. Fights over how to do it shouldn’t get in the way,” E. J. Dionne, Jr. writes, “Democrats might note that the hashtag #MoscowMitch, a phrase used by MSNBC host Joe Scarborough, went viral to protest Senate Majority Leader Mitch McConnell’s refusal to allow votes on bills to protect the 2020 election from foreign interference. Making life hell for McConnell and his party for blocking necessary and patriotic legislation would be a good use of August…And, yes, the Democratic presidential candidates will debate this week. Judge them not by the points they score but by who among them best understands that removing this reprehensible president from office is far more important than any of their individual ambitions — and that nothing will make Trump happier than an opposition tearing itself to pieces.”

At CNN Politics, Julian Zelizer previews the second round of Democratic presidential debates and focuses on the challenges for front-runners Biden, Warren, Harris, Sanders and Buttigieg. We will get a first look at Governor Steve Bullock on the first night, and likely some fireworks on the second night, with Biden, Harris and Booker on the stage again. But do expect some sharp zingers from the other candidates, who really need to stand out this week. The value of the large field format is that it makes the diverse Democrats look more like the party of the future, and that’s a good optic. But the public would be better-served by a series of randomly selected smaller group debates, including some one-on-one match-ups, giving the candidates more time to show their command of the issues and visions for the future. Surely the networks can afford to do both large field debates and a series of smaller group face-offs.

Ed Kilgore provides some sobering observations at New York Magazine about the likely effects of failed impeachment. Kilgore explains that “it is as certain as anything in this life that the Republican-controlled Senate will not remove Trump from office under any foreseeable set of facts (and no, the Nixon precedent is not especially relevant). A failed impeachment effort — whether the House doesn’t formally take up articles of impeachment, or it takes them up and they are defeated, or the Senate acquits — would not only leave the president in office, but could even look like an exoneration (which is precisely how Trump would depict it). So what would be the point? A theoretical discharge of duty?…A reelected Trump would be rampant, vengeful, and (of course) unrepentant. The Supreme Court and the entire federal judiciary would likely become a confirmed enemy to progressivism for a generation. With one or two more Trump appointees to SCOTUS, reproductive rights would almost certainly be vaporized. Climate change might well become truly irreversible. Trumpism (or something worse) would complete its conquest of one major political party, and the other would be truly in the wilderness and perhaps fatally embittered and divided.”

Apropos of the dust-up about where folks Trump doesn’t like should go back to, at Daily Kos Elections Guide, David Jarman shares a map students of political demographics may find of interest, which distills Census Bureau American Community Survey 5-Year Data (2013-2017) “most frequently-reported ancestry or origin” for every congressional district: 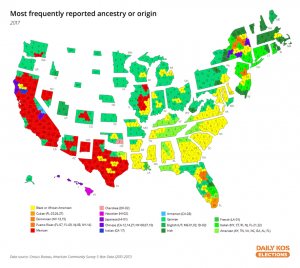 Noting that “in nearly half of the nation’s 435 congressional districts, the most prevalent ancestry is a non-European one,” Jarman also provides an in-depth analysis of the chart’s limitations. He also has  maps showing the second and third “most reported and ancestry or origin” for each district, and provides links for an even more granular analysis.

The New Republic’s Adam Eichen ruminates on the failure of Democrats “to strategically and methodically focus on the levers of power,” and offers some suggestions, including: “…Democratic donors and elites are generally far too focused on federal elections, a particularly egregious oversight given the sizable governing power found at the state and local level…Daily Kos election expert Stephen Wolf told TNR that, for maximum results, the Democrats should target the Texas State House, Florida State Senate, and both legislative chambers in Pennsylvania in 2020. Each of these chambers only require a handful of seats to flip to win Democratic control. Doing so, in the case of Texas and Florida, would block some of the worst and most devastating partisan gerrymanders of the next decade. Creating a Democratic trifecta in Pennsylvania, on the other hand, would open the door to a major voting rights expansion in a key swing state…Similarly, Wolf suggests Ohio’s two Supreme Court races should be a priority, as a dual victory would give liberals a majority on the bench, providing the only vehicle moving forward to striking down GOP gerrymandering and voter suppression in the Buckeye State…As Brian Kemp’s dubious handling of his own, ultimately successful bid for Georgia governor in 2018 makes readily apparent, secretary of state contests should also be a focus. In 37 states, this is the office that manages elections, overseeing such potentially consequential items as voter rolls, the certification of candidates, and the conduct of recounts. Thirty-one of these states directly elect the secretary of state, with Kentucky, Louisiana, and Mississippi up for grabs in 2019.”

Sam Wang of the Princeton Election Consortium tweets, “Now that the Supreme Court has run away from partisan gerrymandering, it’s time to fight on a state-by-state basis. Here’s a long list of actions for individual states. I’ll add to it as more ideas come up. First, the categories of actions you can take: 1) Ballot-initiative process: push for independent commissions. 2) Friendly state courts: file lawsuits. 3) Public-comment period on redistricting: use it in 2021 to speak for your community of interest. Use data to analyze/offer maps. 4) Everywhere: write your paper…5) Disrupt single-party control by flipping a legislature or breaking its supermajority. 6) Support local reformers: Common Cause, League of Women Voters, or local organizations. 7) Everywhere: help gather data & become a redistricting tech maven!” Wang has other suggestions right here.

In response to numerous polls indicating strong public support for allowing people to keep their private insurance if they want it, Sen. Kamala Harris has unveiled a more flexible health care plan. As Jonathan Cohn reports at HuffPo, “It’s government-run insurance, but with a 10-year transition and a private alternative for those who want it…It would eventually replace employer-sponsored plans, over the course of a decadelong transition, but it would allow private insurers to offer an alternative form of coverage, much as they do today for seniors on Medicare…the Harris plan calls for a more sweeping transformation than the reforms supported by former Vice President Joe Biden. But it would stop short of the change to wholly government-run insurance that Sen. Bernie Sanders (I-Vt.) has championed. Cohn notes Harris’s timetable for Medicare for All “is more than twice as long as the four-year changeover in the Sanders bill.”