Democrats tend to think of Florida as a red state, and it is a ‘do or die’ state for Trump. But sometimes, it’s more instructrive to think in terms of swing counties. “If history is any guide, whichever way Pinellas county voters swing next November will decide if Trump wins another four years in the White House,” Richard Luscombe reports in The Guardian. ” The heavily populated county at the western end of Florida’s I-4 corridor has backed every winning presidential candidate, five Republicans and four Democrats, since 1980, the anomaly of the 2000 election excepted. It was also the largest of only four Florida counties, out of 67, that swung to Trump in 2016 after supporting Obama in the two previous contests…“The county is a swatch of America. In St Pete, you could easily be in California – they lean left big time. In the north part of the county there are a lot of retirees, people who are older, more conservative, and in the middle you have this mix, the older population and young families, who are 30s to 50s…“We’ve pushed south Pinellas, I believe, strongly to be blue, and the middle part is now leaning really blue. And we’re going to turn the north part of this county purple. That’s our plan to deliver Pinellas in 2020.”

Another swing county in a different state may also decide the outcome of the 2020 presidential election. Tom McCarthy writes, also at The Guardian: “In the two and a half years since Trump became president, his bedrock of support has not shifted. People who love Trump still love Trump. But life has changed in Northampton county, Pennsylvania, one of those crucial swing counties nationwide that voted twice for Barack Obama before flipping for Trump – and which could decide whether Trump gets a second term…the electorate in Northampton has changed. While some older voters have died, new residents – commuters, retirees, warehouse industry employees – have moved in, and a flood of new voters has entered the field, with turnout among young voters tripling from the midterm elections of 2014 to the midterm elections of 2018…If Trump wins here in 2020, he has a great shot at retaking the state of Pennsylvania, and at recapturing the White House, political analysts say. But if Trump loses here, he might become the first one-term president since George HW Bush.” In 2018, “That turnout drove huge gains for Democrats in the Pennsylvania state legislature, while the Democratic governor won re-election with 57% of the vote. In a US senate race, the incumbent Democrat beat a virulently anti-immigrant Trump cutout by 13 points.”

From “Notes on the State of Politics” by Larry J. Sabato and Kyle Kondik at Sabato’s Crystal Ball:

In yet another Guardian article, Lloyd Green sheds light on the stakes in a Supreme Court ruling on Obamacare: “The latest polls tell us that half the country views “Obamacare” as “mostly a good thing”, while fewer than 40% disagree with that proposition. Since the ACA’s enactment in 2010, the hostility surrounding the law has markedly abated. In fact, voters have come to particularly appreciate those ACA provisions that mandate coverage for pre-existing conditions, and coverage for dependent children up to the age of 26. By the numbers, almost seven in 10 Americans “do not want to see” the supreme court overturn protections for pre-existing conditions…On the other hand, if the ACA and its protections were struck down, the consequences could be grave. The Urban Institute reports that “the number of uninsured people in the US would increase by 19.9 million, or 65%”. In fact, the effects in swing-state America could be even more devastating, both on the personal and political planes…All things being equal, the ranks of uninsured would more than double in Michigan and Pennsylvania. Florida would probably see a jump in uninsured by two-thirds. As for Wisconsin and Texas, the figure would swell by one-third. In other words, ACA repeal would be a dagger in the chest of the most purple of states. Were Trump to lose any three of those states, he would be forced into unplanned and early retirement.”

Romesh Ponnuru underscores the pivotal importance of the High Court’s ruling on the ACA in “Winning the Obamacare Suit Would Be a Disaster for Republicans” at Bloomberg Opinion: “There’s an important bit of contingency planning that Republicans have neglected to do. Neither in the White House nor on Capitol Hill are they prepared for the possibility that their lawsuit against Obamacare will succeed…Most observers don’t expect the courts to strike down the law, and Tuesday’s oral arguments in a New Orleans federal courtroom didn’t change many minds. If the suit is successful, however, it will create an acute problem for a lot of people. Insurers will again be able to discriminate against people with chronic conditions. Many states’ budgets will be thrown into turmoil as Washington stops covering most of the tab for the expansion of Medicaid coverage to households just above the poverty line. People who get their insurance through Obamacare’s exchanges will stop receiving the tax credits that make it affordable…If the Affordable Care Act were to lose in court, and Congress and the president failed to agree on legislation afterward, Americans would go through the largest disruption in health-care arrangements that Washington has ever imposed.”

At FiveThirtyEight, Geoffrey Skelley argues that “the Bluegrass State is probably too red to elect a Democratic senator at the moment, barring some unexpected development…while McGrath might be one of the best candidates Democrats can put up against McConnell, it will still be mighty difficult for her to actually win in ruby red Kentucky.” He also writes, however, “Is it possible? Sure. It would take nearly everything to break McGrath’s way, though. For one, the national environment would need to be reallybeneficial for Democrats — probably even more Democratic-leaning than the 2018 cycle was. Maybe McGrath can get help from a strong Democatic presidential nominee. And it’s not like McConnell himself is invulnerable: He has a poor approval rating in his home state, despite its strong GOP lean. The most recent Morning Consult data pegged his approval rating at just 36 percent compared with 50 percent who disapprove of him, making him the most unpopular senator in the country.”

Kentucky may still be political fool’s gold for Democrats, but at least McGrath has collected a lot of it — at record amount, actually. As Matthew Rozsa notes at salon.com, “Amy McGrath, the former fighter pilot vying for the Democratic nomination to run against Senate Majority Leader Mitch McConnell in Kentucky next year, raked in $2.5 million in the first 24 hours of her campaign…McGrath’s team confirmed the sky-high figure to NBC News, which campaign manager Mark Nickolas said represents the most ever raised by a Senate campaign in its first day. The campaign noted that more than $1 million of that total was donated within the first five hours of its announcement, and the average donation was $36. The previous record was the $1 million netted by former NASA astronaut Mark Kelly when he announced his candidacy for the Senate in Arizona earlier this year, according to the Democratic Senatorial Campaign Committee…The entirety of the $2.5 million in donations came in the form of online contributions, with checks and promised contributions not being counted in that figure.”

Nathaniel Rakich shares a revealing chart regarding secoond choices in the Democratic contest for the party’s presidential nomination, also at FiveThirtyEight: 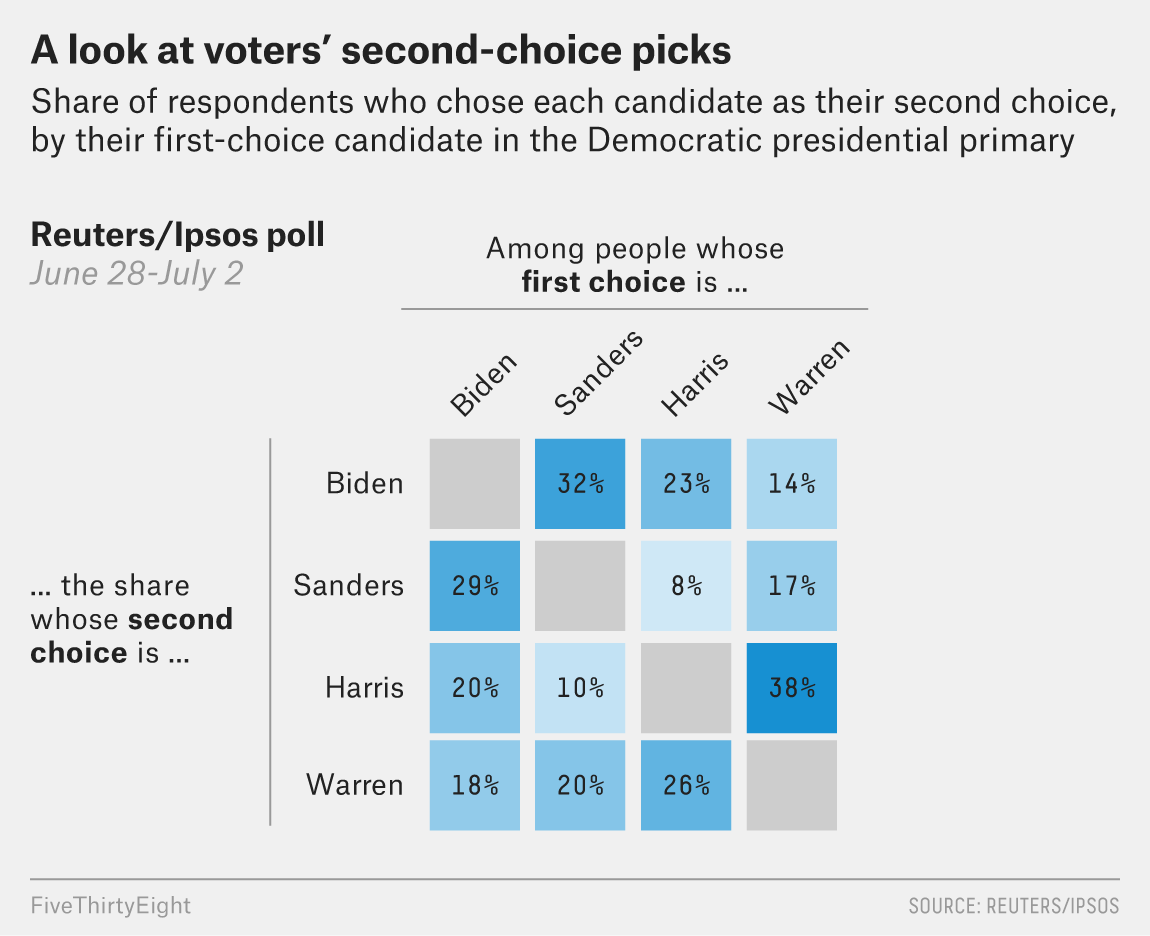 Sen. Bernie Sanders has a novel twist on presidential campaign endorsements. Gregory Krieg reports at CNN Politics: “Sen. Bernie Sanders has long bathed in the antipathy of his political enemies. Now, he’s using their unkind words to bolster his progressive credentials in the heat of the 2020 Democratic presidential primary…The Sanders campaign on Wednesday unveiled a new page of “anti-endorsements” on its website — a list of a dozen wealthy businessmen and one centrist think tank — who have publicly criticized him and his agenda…In a speech last month, Sanders quoted President Franklin D. Roosevelt, who once said of his industrialist rivals, “They are unanimous in their hate for me — and I welcome their hatred.” Throughout the campaign, Sanders has channeled that sentiment, highlighting attacks from wealthy adversaries and establishment figures in fundraising pitches and stump speeches. Their opposition, Sanders argues, is evidence that he can be trusted to fight against their interests, whether it means taxing Wall Street or agitating for higher wages at companies like Walmart…”It should come as no surprise that corporate CEOs and billionaires have united against our movement. These people have a vested interest in preserving the status quo so they can keep their grip on power and continue to exploit working people across America,” Sanders said in a statement following the rollout. “We welcome their hatred.”