Trump keeps floating trial balloons, proposing that “he serve more than two terms as president.” If polls are any indication, there’s litttle support for the notion: “Donald Trump has instructed close advisers to play down internal White House polling that showed him losing heavily to Joe Biden in key industrial “rust belt” states ahead of the 2020 election,” Nick Allen writes at The Telegraph. “According to a leaked 17-state poll, conducted by the president’s pollster Tony Fabrizio, Mr Trump was down 16 points in Pennsylvania, and 10 points in Wisconsin, both of which he won narrowly in 2016.Mr Trump was also trailing Mr Biden by seven points in Florida, which he won in 2016, and was only two points ahead in the traditionally Republican state of Texas.” 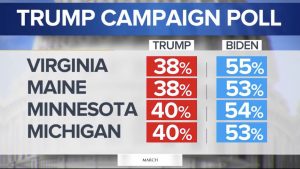 At FiveThirtyEight, Perry Bacon, Jr. writes, “a national Quinnipiac University poll released this week, for example, showed Joe Biden with a 53-40 lead against President Trump. But it wasn’t just Biden — all the Democratic contenders Quinnipiac included in matchups with Trump were significantly ahead of the president: Bernie Sanders 51-42, Kamala Harris 49-41, Elizabeth Warren 49-42, Cory Booker 47-42 and Pete Buttigieg 47-42. Meanwhile, in an interview with ABC News’s George Stephanopoulos, Trump dismissed any polls that showed him trailing the Democrats.1 “No, my polls show that I’m winning everywhere,” Trump said….So, just how seriously should we take hypothetical general election polls more than a year out and before the Democratic nominee has been selected?..Not seriously.” However, Bacon notes, “Trump’s real political problem is self-identified independents and voters who don’t love him or hate him. In the 2018 midterms, independents broke heavily for the Democrats in U.S. House elections (+12), as did voters who “somewhat” disapproved of the president (+29), according to exit polls. In this Quinnipiac survey, all the Democratic candidates had double digit leads over Trump among independents, and those are the numbers that should worry the president and his political team.”

At Vanity Fair T. A. Frank has a litany Democrats will like: “If we look at polls from places like Pew and Gallup, the statistical portrait of the silent majority is complicated, but it’s hardly unfavorable to Democrats. Over sixty percent of Americans favor increased federal spending on education, infrastructure, and veteran’s benefits. Over 55 percent support spending more on environmental protection. Sixty-two percent believe that corporations don’t pay their fair share. Sixty percent say that government must ensure that all Americans have health coverage. About two thirds support upholding Roe v. Wade, the Supreme Court decision that made abortion a constitutional right. About 69 percent describe themselves as “sympathetic” or “very sympathetic” to illegal immigrants. Well over 60 percent support same-sex marriage. And a plurality feels our military interventions abroad have made us less safe. On the face of it, then, Americans and Democrats are made for one another.” He also has one for conservatives.” He also has a similar screed touting some conservative cultural views of the public, then notes “Here we see the problem for Democrats. While much of Twitter condemns these views as deplorable, they are held by robust majorities of Americans. They’re far from the hard-right social views of someone like Pat Robertson, but they’re also far from the social views of Atlantic interns.”

All of the “it’s way too early” to take polls seriously arguments aside, Elizabeth Warren’s rise in the polls is pretty impressive, considering the sheer size of the Democratic field. Christopher Cadelago puts it in context at Politico: “Elizabeth Warren is threatening Joe Biden’s front-runner standing in California, and Kamala Harris is showing signs of weakness in her delegate-rich home state, according to a new poll…A new UC Berkeley-Los Angeles Times poll found Biden leading with 22% of likely Democratic primary voters; followed by Warren and Sanders, who are at 18% and 17%, respectively.,,Harris (13%) and South Bend, Ind., Mayor Pete Buttigieg (10%) are the only other 2020 presidential contenders to exceed 3% in the survey, which was directed by pollster Mark DiCamillo, who for years led the venerable Field Poll.”…As Sen. Elizabeth Warren rises in opinion polls, Sen. Bernie Sanders is honing his message of economic populism with more focus on a “21st Century Economic Bill of Rights.” In recent speeches and interviews,   Sanders unveiled his economic and social reform agenda and promoted his “21st Century Economic Bill of Rights.” Recalling FDR’s 1944 proposal, Sanders said he wanted to secure the right to a job at a living wage, real retirement security, universal health care and educational opportunity. “I think, frankly, I am the strongest candidate to defeat Trump…We can win in Pennsylvania, Wisconsin and Michigan, and some of the other battleground states.” Sanders has a slight lead over Warren in the race for the Democratic presidential nomination in most recent polling, and many progressive Democrats like them both. Although they are trying to win over each other’s voters, their campaigns have managed a civil tone. They won’t be on the same stage during the June 26-27 presidential debates. Warren is in the first group of ten debate on the 26th, while Sanders is on the next night.

In his article, “Brace for a Voter-Turnout Tsunami: Even with a surge in overall participation, white working-class voters could still remain decisive in the 2020 election,” Ronald Brownstein explains at The Atlantic: “Signs are growing that voter turnout in 2020 could reach the highest levels in decades—if not the highest in the past century—with a surge of new voters potentially producing the most diverse electorate in American history…But paradoxically, that surge may not dislodge the central role of the predominantly white and heavily working-class voters who tipped the three Rust Belt states that decided 2016: Pennsylvania, Michigan, and Wisconsin. Even amid a tide of new participation, those same voters could remain the tipping point of the 2020 election…With Donald Trump’s tumultuous presidency stirring such strong emotions among both supporters and opponents, strategists in both parties and academic experts are now bracing for what Michael McDonald, a University of Florida political scientist who specializes in voting behavior, recently called “a voter turnout storm of a century in 2020.”…In a recent paper, the Democratic voter-targeting firm Catalist projected that about 156 million people could vote in 2020, an enormous increase from the 139 million who cast ballots in 2016. Likewise, Public Opinion Strategies, a leading Republican polling firm, recently forecast that the 2020 contest could produce a massive turnout that is also unprecedentedly diverse.”

Brownstein elaborates, “I think we are heading for a record presidential turnout at least in the modern era, and by that I mean since the franchise went to 18-year-olds,” in 1972, says Glen Bolger, a partner at Public Opinion Strategies. “And I mean not only in total numbers [but also] in terms of the percentage of eligible voters [who turn out]. The emotion behind politics … is sky-high, and I don’t think it’s just on one side. I think it’s on both sides.”..’McDonald thinks the turnout surge in 2020 could shatter even older records, estimating that as many as two-thirds of eligible voters may vote next year. If that happens, it would represent the highest presidential-year turnout since 1908, when 65.7 percent of eligible Americans cast a ballot, according to McDonald’s figures. Since 18-year-olds were granted the vote, the highest showing was the 61.6 percent of eligible voters who showed up in 2008, leading to Barack Obama’s victory. And since World War II, the highest turnout level came in 1960, with John F. Kennedy’s win, when 63.8 percent of voters participated…But the clearest sign that high turnout may be approaching in 2020 is that it already arrived in 2018. In last year’s midterm, nearly 120 million people voted, about 35 million more than in the previous midterm, in 2014, with 51 percent of eligible voters participating—a huge increase over the previous three midterms. The 2018 level represented the largest share of eligible voters to turn out in a midterm year since 1914, according to McDonald’s figures. Catalist estimated that about 14 million new voters who had not participated in 2016 turned out two years later, and they preferred Democrats by a roughly 20-percentage-point margin.”

“The nature of the population eligible to vote is evolving in a way,” notes Brownstein, “that should indeed help Democrats. McDonald estimates that the number of eligible voters increases by about 5 million each year, or about 20 million from one presidential election to the next. That increase predominantly flows from two sources: young people who turn 18 and immigrants who become citizens. Since people of color are now approaching a majority of the under-18 population—and also constitute most immigrants—McDonald and other experts believe it’s likely that minorities represent a majority of the people who have become eligible to vote since 2016…In 2016, the Census calculated that almost two-thirds of eligible white voters cast a ballot. By contrast, African American turnout fell to 59 percent—a sharp decline from both of Barack Obama’s elections—and Latino turnout remained at typically modest levels, just below 48 percent. Young people stayed home, too: Only about 46 percent of eligible voters under 30 turned out, far below the participation among those 45 and older…while turnout surged across virtually all groups, it increased most sharply among the voters who historically have participated at the lowest levels. For instance, the Census Bureau reported that turnout among voters under 30 last year jumped to about 36 percent of eligible voters, compared with just 20 percent in 2014. That still left young people far behind the turnout rate among seniors, about two-thirds of whom voted, but their rate of increase from the previous election was much greater. Similarly, the Census Bureau found that the turnout rate in 2018 increased more for Latinos and Asian Americans than it did for white people.”

Brownstein reports that “Data from States of Change show that over the past quarter-century, white voters without a college education have typically declined as a share of actual voters little by little over each four-year presidential cycle: They fell from 61 percent of voters in 1992 to 44 percent in 2016. Minority voters, meanwhile, have increased over those seven election cycles from 15 percent in 1992 to 26 percent in 2016. And college-educated whites have drifted up, from 24 percent in 1992 to 30 percent in 2016…Ruy Teixeira, a veteran liberal analyst and a co-founder of States of Change, believes it’s likely that in 2020 the decline in blue-collar white people’s share of the total vote could again push toward the high end of recent experience, shrinking by as much as 3 percentage points, to just over 40 percent. “I think if we do have a high-turnout election that builds on the trends we saw in 2018, you might see the white non-college share decline significantly more than it did in 2016,” Teixeira says…Those changes pose obvious problems for Trump in winning the national popular vote. But they also present a challenge for Democrats, because these shifts are not evenly distributed among the states. The electorate is not diversifying nearly as fast in the three Rust Belt states that Trump dislodged from the Blue Wall—Michigan, Pennsylvania, and Wisconsin. Those states, for years to come, will remain older and whiter than the nation overall, meaning that to win them, Democrats have to run better with older, whiter voters than they do in most places.”