Geoffrey Skelley has a post, “Who Might Make The Democratic Debate Stage?” at FiveThirtyEight, which notes that “Democratic hopefuls have two ways of getting onto the debate stage, according to a February news release from the Democratic National Committee. They can earn at least 1 percent of the vote in three different national or early-state polls conducted by qualifying pollsters, or they can receive donations from at least 65,000 unique donors, with at least 200 individual donors in at least 20 different states.” Skelley goes on to explain that 15 candidates have qualified, with more expected — maybe over 20, even though the DNC caps the total at 20. The debate spots would then be allocated by the highest average scores. But, really what’s so great about having 20 candidates on a stage? Why not have randomly-drawn, one-on-one match-ups all over the country, even in small towns? It could be a fun thing to attend on a slow Thursday night.

At Vox, Li Zhou argues that “Democrats are prioritizing “electability” in 2020. That’s a coded term. It often means white and male.” Zhou writes that “the expectation of who can win is inextricably wrapped up in the knowledge of who has won…And in the case of the presidency, that mold consists overwhelmingly of older white men, a precedent that could hurt candidates who don’t fit those characteristics…“Metrics like authenticity and likability and electability are just code that we use against candidates who are not like what we are used to,” Christina Reynolds, a spokesperson for Emily’s List, a political organization that supports women candidates, previously told Vox…“Electability,” in other words, could be another term that actively excludes candidates who don’t fit whatever the historical profile of a political candidate looks like.” Zhou notes the experiences of President Obama, Democratic candidate for georgia Governor Stacy Abrams and Sen. Kamala Harris in confronting the “electability” argument. The article title overstates the reality, however, in that many Democrats have refused to be hustled by the electability argument. Certainly, Democrats can do better in running more diverse candidates. But the photo below of Dems elected in 2018 shows quite clearly which party’s candidates look more like America, and Obama and HRC did very well with Democratic voters. 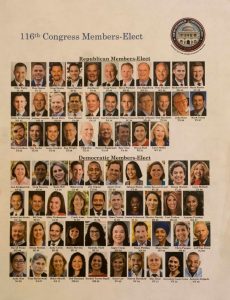 David Frum’s “Democrats Are Falling Into the Ilhan Omar Trap: By rushing to stand with the controversial congresswoman, the 2020 contenders are allowing Trump to transform her into the face of their party” also seems overstated to me. Surely most persuadable voters understand that Democrats are a highly diverse party, which includes Sen. Joe Mancin, who recently endorsed a Republican Senator, as well as Rep. Omar. It’s not like Democrats are going to sit around and quietly take crap from Republicans who try to stereotype them. Nor will Democrats in competitive elections risk their re-election prospects by over-praising Rep. Omar. As for “the face of their party,” Republicans have a face, Democrats have faces. Most voters get that.

It’s probably a good thing that “Former Virginia Gov. Terry McAuliffe won’t run for president in 2020.” Not that McAuliffe wouldn’t make a good president — he was an excellent Governor of Virginia. As for reasons why, he cited the glut of presidential candidates and another urgent priority: McAuliffe is one of the strongest “team players” among Democratic leaders, and one who gets it that Democrats have a lot of work to do in order to become competitiive in states across the nation. CNN Politics reporters Caroline Kelly and Dan Merica quote McAuliffe’s instructive explanation: “I’ve listened to the Virginians and I’m going to help Virginia for the next six months. I could spend eight months traveling around the country running for president, or six months really making a difference,” the Virginia Democrat told CNN’s Chris Cuomo during an exclusive interview on “Cuomo Prime Time.”…McAuliffe said that, after being courted by state Democrats, he would be “going home” to help coordinate the campaigns of the state’s national and local Democrats. “I’m going to work the next six months every single day to make sure Virginia, we win the House and the Senate, and then next year I’m going to work like a dog to make sure that we are blue,” he said. “We were the only southern state that went for Hillary in 2016, very proud of that. We need to do it again in (20)20.” Dems could use a few more like him.

From “The Democracy Poll: Americans and the Economy” by the editors of Democracy: A Journal of Ideas: “Conducted in January exclusively for the journal by Change Research, the poll asked respondents a range of questions about their opinions on a host of economic matters and tested their knowledge of economic policy. The purpose was to try to learn what presumptions about economics—about growth and fairness, about government intervention, about the two parties—people carry around in their heads. We also wanted to learn how much people know about certain economic realities, in order to find out how much educating Democrats and progressives need to do….Results? There is some good news. People have pretty progressive attitudes on health care and on some aspects of government investment and intervention. They also reject some basic philosophical conservative arguments about wealth, poverty, and other matters. But here are the catches: They still have little faith in government; they still share a number of conservative assumptions about how the economy grows; and yes, they still seem to think the deficit trumps everything else.” A few highlights: “There was also majority support, 54 percent, for Medicare for All among respondents, even when they were told their taxes would “go up, perhaps by a lot.”…When asked how much of the wealth the top 1 percent should hold, a plurality of 26 percent of our sample said 20 percent. (The real number is 90 percent.)…Respondents still think the Republicans are better for the economy, by 49 to 40 percent…When we asked them whether the free market better provides for people’s needs or if the government should steer investment “in some cases,” they chose the free market 59 to 41.”

The Democracy editors continue: “The last four recessions in this country, going back nearly 40 years, have happened under Republican presidents. But still, Republicans are seen as slightly better at improving the economy (49-40)…When it comes to the government hiring out-of-work Americans, respondents also seem to be quite Keynesian. Overall, just under 60 percent said they would strongly support such a measure, with a majority from both parties either somewhat or strongly supporting it. Support for investing in infrastructure was also high and bipartisan…On the downside, respondents also support cutting government spending, reducing the national debt and deficit, and cutting personal taxes. Overall, most respondents were in favor, to some degree, of such tax cuts during a recession (75 percent). Respondents were supportive, to varying degrees, across the ideological spectrum…Those in favor of Keynesian economics must evidently do a better job of countering the longtime scaremongering, from both sides of the aisle, about the effects of government deficits and out-of-control spending…Finally, we asked respondents for their priorities in terms of major public investments and major social expenditures. A majority (over half) of all respondents chose “building and repairing roads, bridges, and mass transit systems” as their preferred investment out of a list of five.”

“For this more radical agenda to succeed among Democratic candidates, the party will have to resist describing its big tax proposals as merely a means to pay for priorities like a Green New Deal or Medicare for All,” argues Bryce Covert in his article “Why Democrats Like Taxes Again” in The New York Review of Books. He notes further, that “if Democrats fail to make the argument for higher taxes on the rich as a social good, a public benefit in itself, they will once more play into the Republican smear of “tax and spend Democrats.” Never mind the hypocrisy that Republicans spend their time out of power decrying the economy-killing, existential threat of soaring federal debt and then once back in power, spend where they please and rarely deign to pay for it…When Democrats propose taxes to pay for their policy priorities, they are simply playing by rules the other side never follows…The country urgently needs them to turn away from that tactic and toward a more radical approach to taxation that can reverse income inequality and America’s gradual drift toward plutocracy…Without the megaphones of a few ultra-rich people drowning out the healthy din of democracy, more voices could be heard in the halls of power—which, in turn, could boost a more progressive political agenda that actually commands broad support among the public, if not among Republicans, centrist Democrats, and the wealthy donors who keep them in power. But first, we have to properly soak the rich.”

Salon.com’s Lucian K. Truscott IV has some choice words for Democrats and supposedly liberal news commentators who are “forming circular firing squads around the glass-topped anchor tables on MSNBC and CNN. They’re sniping at each other on op-ed pages. They’re posting unhinged, granular takedowns of their opponents on Facebook. They’re tweeting out quotes from decade-old speeches targeting each other for departures from liberal orthodoxy. They’re catching fellow Democrats for slips of the tongue, or use of the hands, or backroom misbehavior like — gasp! — yelling at a staffer!…WFT, Democrats? WTF, liberal media? Did we learn nothing over the last three years?…Every day Democrats throw garbage at each other…You know what the real shame is? They’re nitpicking the Democrats while Trump puts a torch to the whole damn house…You want four more years of this shit? Four more years of Trump turning the White House into a criminal enterprise? Four more years of racism and gay-baiting and Muslim-hating, and demolition of democratic norms and government institutions and the rule of law? Go on another cable show, pen another op-ed, tweet out another rumor, trash another fellow Democrat. Keep it up.”

Truscott’s sober warning for Democrats merits consideration by all the presidential candidates. My beef with the TV media is a little different: Stop interrupting your interviewees with lengthy comments designed to make yourself look good. The point is to educate the public. Give candidates running for high office more room to explain their views. Viewers hate interviews which dissolve into two or three people all talking at the same time. If you need a role model for how to conduct a great interview, check out the now retired Brian Lamb’s more than 5,000 thousand interviews at C-SPAN. His thoughtful, but short, pointed questions served his viewers and his interview subjects extremely well. One of his interview subjects, the late Christopher Hitchens dedicated his bio of Thomas Jefferson to Lamb; “For Brian Lamb… a fine democrat as well as a good republican, who has striven for an educated electorate”.