Enten continues, “Whether it be the exit polls, Gallup or the Pew Research Center, there’s no doubt Democrats are more liberal than they once were. In the exit polls, for example, the percentage of Democratic voters who identify as liberal rose by double-digits between the Democratic midterm blowouts of 2006 and 2018…Still, moderates and conservatives make up about 50% of all Democrats. In the 2018 midterms, the exit polls found that moderates and conservatives made up 54% of those who voted Democratic. Pew similarly put moderate and conservative Democrats as 54% of all self-identified Democrats and independents who lean Democratic voters in 2018. Gallup’s 2018 figures had moderates as 47% of all adults who self-identified as Democrats…And while liberals make up about 50% of Democrats, many of them are only “somewhat liberal.” In a Quinnipiac University poll taken last month, people who identified as “very liberal” were only 19% of all Democrats and independents who leaned Democratic. Very liberals made up the same 19% of those who said they were voting Democratic in Suffolk University’s final 2018 pre-election poll. The 2016 primary exit polls discovered that about 25% of Democratic primary voters called themselves very liberal…Put another way: the moderate/conservative wing of the Democratic Party likely still makes up at least 2 times as much of the party’s voters than the very liberal flank.”

Every political junkie should take a look at Stephen Wolf’s “Check out our maps and extensive guide on the demographics of every congressional district at Daily Kos. Here’s just one of his impressive graphics: 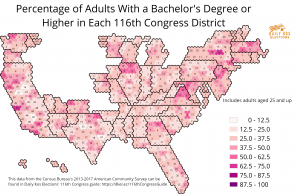 “To coincide with Tax Day, the Democratic Congressional Campaign Committee is rolling out digital ads on Monday attacking 12 Republicans for the GOP tax plan that passed during the 115th Congress,”  Simone Pathe writes in “Democrats launch Tax Day ad attack aimed at GOP overhaul” at Roll Call. “The new Facebook ads, obtained first by Roll Call, signal Democrats will continue to use the 2017 tax overhaul, which passed with only Republican votes, as a key part of their economic message heading into 2020, when the party will be trying to protect their midterm gains and expand the map by investing heavily in such places as Texas…Democrats made the Republican tax overhaul — especially the new $10,000 cap on the federal deduction for state and local taxes — a key part of the party’s messaging in 2018, when Democrats gained a net of 40 seats in the House. That surge was fueled by gains in New Jersey, New York, Illinois and California, where residents rely more heavily on the deduction.”

Laila Lalami writes at The Nation: “Whatever happens in 2020, expecting transformative change from the top is a recipe for disappointment. If Democrats want to deliver on their big promises, they have to work on the small ones first. Last month, for example, I attended a fund-raiser for the Virginia House of Delegates’ Danica Roem. As far as political events go, this one wasn’t huge or loud or flashy. It was simply an opportunity to hear from Roem, who made history in 2017 as the first trans woman to be seated in a statehouse—and who did so by defeating a 26-year GOP incumbent who has called himself Virginia’s “chief homophobe.” Her winning strategy? Focusing on the needs of her district, specifically traffic issues on State Route 28. It’s this unglamorous work that we need to be doing if we want to have any chance of making serious change…Let’s leave salvation to the prophets and work on saving ourselves. And that begins by treating our candidates like the public servants we expect them to be.”

At Roll Call, Lindsey McPhereson notes some Democratic ideas for financing a major infrastructure program, which can create needed jobs at a living wage: “The difficulty of avoiding a “stimulus,” or a federal investment that’s not offset, becomes greater the more Democrats want to spend. Pelosi said she wants the government to invest at least $1 trillion in infrastructure, preferably $2 trillion…Democrats are committed to finding ways to pay for an infrastructure package but have yet to coalesce around any one proposal…Members at the retreat mentioned at least four different ideas: Hoyer favors a gas tax increase; Democratic Policy and Communications Committee Chairman David Cicilline wants to roll back the GOP tax law for revenue; CPC Co-chair Mark Pocan floated a high speed financial transaction fee; and Kildee, a tax writer, suggested investment bonds.”

At Sabato’s Crystal Ball, Kyle Kondik explains that “the [Democraticocra] voting calendar is so frontloaded that a nominee may emerge relatively early in the process…Based on the tentative early primary and caucus calendar, nearly two-thirds of the pledged delegates will be awarded from early February to mid-March.” Kondik provides the following chart to illustrate: