Elaine Kamarck shares some numbers to help explain “Why there will be a woman on the 2020 Democratic ticket” at Brookings: “Women have led the opposition to Trump from Election Day 2016 on—54 percent of women voted for Hillary and 53 percent of men voted for Trump. The day after he was inaugurated, thousands of women assembled in Washington and in cities around the country in protest. Things haven’t gotten better as the Trump presidency has matured. Trump’s approval/disapproval rating among men is equal as of this spring, with 47 percent approving of the job he’s doing and 47 percent disapproving. But among women only 32 percent approve of Trump’s performance while 63 percent disapprove…From 1980 (when turnout for men and women was about equal) to 2000, the gap was around 2 percent. It gradually widened to 3 percent and grew to 4 percent in 2016, contributing, no doubt, to Hillary’s large popular vote victory…Nowhere did women’s general antipathy to Trump show up more clearly than in the 2018 midterm elections. In that election women maintained their edge in turnout, voting at a 4 percent higher rate than men. But they also skewed even more Democratic than they did in 2016, voting for Democratic candidates at a rate of 59 percent, while men skewed Republican at a rate of 51 percent.”

At New York magazine, Ed Kilgore provides some nuanced analysis on the electability of a Democratic woman presidential nominee: “The reality is that Clinton comfortably won the popular vote and lost the election due to an improbable Electoral College inside straight that Trump likely cannot pull off twice. And her loss was certainly close enough that factors other than her gender — her failure to invest resources in key states she lost, the Comey letter, a general lassitude among liberal voters who had no idea Trump could win — may have been decisive…At a minimum progressive activists and media observers should fight the sexist assumptions afflicting candidates like Elizabeth Warren instead of promoting or surrendering to them…With a less defeatist attitude, progressives and particularly feminists might invest in building a frontlash — pride among women about Warren’s brains and accomplishments — that can outweigh any sexist backlash. The “nevertheless, she persisted” tagline that followed Warren around in 2017 after Mitch McConnell tried to silence her on the Senate floor might become relevant again as she and other women in the presidential field refuse to give up on the proposition that they are electable as they actually happen to be…Until such time as voters cast their ballots in caucuses and primaries, it’s premature to decide Democrats can’t “risk” running a woman again. See how they run, and maybe the myth of an incorrigibly sexist electorate will shatter, too.”

This Gallup Poll data is from 2015 (chart via FiveThirtyEight). More recent polls indicate the public is not quite so alienated by the “sociailist” brand or so opposed to a candidate based on sexual orientation. Since Democrats now have 2020 presidential candidates that fit into several of these categories, now would be a good time for pollsters to ask the question again.

“Clearly concerned that more insurgents like New York Rep. Alexandria Ocasio-Cortez could unseat established House members in party primaries (as AOC did last year to Speaker-in-Waiting Joe Crowley), the DCCC has announced it will not give work to any consultant or pollster who dares to work for candidates challenging congressional incumbents in Democratic primaries…Democrats should remember that it’s not just Obama who once had the chutzpah to challenge a Democratic incumbent. In many ways, the Democratic Party of the last 50 years emerged from Democrats’ challenges to an incumbent Democratic president. The campaigns that Sens. Eugene McCarthy and Robert F. Kennedy waged against President Lyndon Johnson in 1968 redefined the Democrats for decades going forward, and produced a generation of political operatives who subsequently steered numerous Democratic leaders to electoral victory. Those challenges, of course, grew out of the deep divisions over Johnson’s handling of the Vietnam War. Today, the Democrats are redefining themselves again, and, now as then, not always to the party establishment’s liking…In 1968, however, while the party establishment strongly opposed those challenges, it didn’t enact any new rules — much less blacklists — to suppress them. That was the right decision then. It would be the right decision now. — From Harold Meyerson’s “Democrats are playing dirty to shut out progressive new voices. They should rethink that strategy” in the Los Angeles Times.

Activists interested in exploring direct democracy possibilities in the states will find a useful resource in Wikipedia’s entry on “Initiatives and Refenda in the United States,” which notes “Between 1904 and 2007, some 2231 statewide referendums initiated by citizens were held in the USA. 909 of these initiatives have been approved. Perhaps even greater is the number of such referendums that have been called by state legislatures or mandatory—600 compared to 311 civic initiatives in 2000-2007.” Ballotpedia adds, “In 2018, Ballotpedia tracked 203 proposals in 34 states. Of those, 34 were approved, 140 were rejected or abandoned, and nine were carried over to the next session.” Vox’s Stavros Agorakis has a  round-up of ballot measures that passed in 2018, addressing Medicaid expansion, liberalization of pot laws, ex-felon enfranchisement, minimuim wage increase, same-day and automatic voter registration and redistricting and others. This map shows each state’s current rules for initiative, referenda and recall, color-coded key right here. 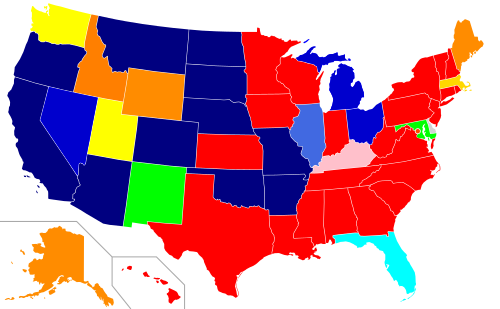 In “House Democrats’ net neutrality win likely DOA in Senate but poised to become 2020 issue,” John Hendel notes at Politico that “The House voted 232-190 Wednesday to revive Obama-era net neutrality regulations in what likely amounts to a short-lived legislative victory — but one that may give Democrats fresh momentum on an issue they hope will feature prominently in the 2020 presidential election…A united Democratic front getting it passed represents a rebuke of the Trump-era FCC’s 2017 repeal of the open internet rules. But the near-total absence of bipartisan buy-in also means it’s likely a non-starter in the Senate…Still, House passage alone could help Democrats keep net neutrality a high-profile messaging and fundraising issue on the 2020 campaign trail. Democrats argue net neutrality sways voters, especially tech-savvy younger voters, and tried to make it a centerpiece going into the 2018 congressional elections…”It polls in the 90s amongst millennials. It’s a top-of-the-mind issue for them. So I just feel that people who vote against it vote so at their own political peril,” Sen. Ed Markey (D-Mass.), lead sponsor on the Senate version of Save the Internet, told Politico Tuesday.”

Also at Politico, Nancy Scola reports on the growing influence of digital wizards in Democratic campaigns: “Bernie Sanders, Elizabeth Warren, Cory Booker and Beto O’Rourke are among the White House hopefuls replicating Trump’s approach by giving senior campaign leadership roles to data and social media mavens. It’s a recognition of how central the online space — from raising breathtaking gobs of money via email to winning the minute-by-minute messaging wars on social media — has become to any candidate for the White House…Sanders in February named Faiz Shakir, the onetime director of new media for Nancy Pelosi, to run his campaign. Booker hired Jenna Lowenstein, the digital director for Hillary Clinton’s 2016 White House run, as deputy campaign manager. And O’Rourke picked political data expert Jen O’Malley Dillon as campaign manager and is relying on Becky Bond, a long-time digital organizer, for strategy advice…Warren, meanwhile, tapped Joe Rospars, chief digital strategist for Obama’s successful 2008 presidential bid, to serve as a senior strategist…“One of the underlying frustrations was…feeling that digital wasn’t allowed to sit at the adults’ table,” said Catherine Algeri, former digital director for both the Democratic Senatorial Campaign Committee and three Senate campaigns. For many years, Algeri said, the sense was, “‘You guys just sit over there and raise money.’”…“Now it’s just so clear that if you don’t have a senior leadership team that really understands how to dominate social media and the ways that news travels around the web, you’re just at a huge disadvantage,” said Laura Olin, a Democratic digital strategist who led social media strategy for Obama’s 2012 reelection.”

“The Democratic Party should offer a vision of citizenship that contrasts with Trump’s celebration of hedonistic consumerism,” Chicago Mayor Rahm Emanuel writes in his article, “The Need That Democrats Aren’t Addressing” at The Atlantic. “We should call on the nation’s sense of deep-seated patriotism to rebut his ugly nationalism. We must champion a spirit of unity and purpose that counteracts his self-serving schemes to pit one community against the next…We can begin by issuing a simple but powerful call: a policy that requires all 18-year-olds to give at least six months of their life to national service. People from different walks of life, with different backgrounds, would serve with one another as a rite of passage. Once young adults graduate high school or reach college age, they would join the military, the Peace Corps, AmeriCorps, or some other service-oriented organization…a universal national-service program will tap into younger Americans’ desire to serve the greater good…against the backdrop of Trump’s call to consumerism, nationalism, and divisiveness, the third and potentially most powerful leg of the Democratic message should tap into America’s deep-seated patriotism and selfless citizenship. Nothing would stir that underlying sense of common purpose more powerfully than a call to universal national service. Nothing else would so fundamentally challenge Trump’s divisiveness.”