The Nation’s Editor Katrina vanden Heuval has the progressive response to Trump’s bellowing about “the best economy ever” under his Administration: “It’s true that wages have begun to rise a bit, with demand for workers and minimum-wage hikes in states and localities finally giving a boost to those on the bottom. But the average weekly pay has grown less than 1 percent per year for the decade. Low-wage workers’ hourly pay in 2017 barely surpassed what they earned in 1979, while that of high-wage workers has increased nearly 50 percent. Inequality is at extremes not seen since 1928. Workers are still not capturing a fair share of the increased productivity that they help to create…And while incomes have stagnated, key costs have soared. Health care remains remarkably expensive; millions go without insurance or are underinsured. Gallup reports that since Trump took office, the number of Americans without health insurance has increased by a stunning 7 million. Female, younger and lower-income workers have seen a greater decline than those who are male, older and/or wealthier. Life expectancy has declined for the third year in a row. The lack of health care explains part of that. The savage opioid epidemic—a disease of despair—accounts for another chunk.”

Osita Nwanevu explains how “Progressive Activists Are Pushing the Democratic Field on Political Reforms” at The New Yorker: “To the extent that Democrats have engaged with the appetite for political reforms, they have done so by endorsing ideas that the next Democratic President will probably be unable to see through, like the elimination of the Electoral College, or ideas that, while achievable and well grounded, like automatic voter registration or campaign-finance reform, do not resolve the main challenges to Democratic policymaking. The primary obstacle to the next Democratic President’s agenda will be the anti-majoritarian institutions and norms that shape federal policymaking. These could conceivably be altered by a Democratic President and Congress, but in ways, such as eliminating the filibuster and expanding the Supreme Court, that the Democratic Presidential candidates have mostly refused to explicitly endorse. Progressive activists have yet to truly penalize the 2020 contenders for their reticence. But, as the promises made by the candidates grow bolder by the week, we can expect more questions, like the toughest ones posed Monday, about how, exactly, they intend to keep them.”

Sure, there are lots of people who are happy with their health insurance, as well as millions more who are not. But you don’t have to look very far for the horror stories, nor for statistics that show how poorly the health insurance industry serves the public overall, as Roqayah Chamseddine documents in his article, “A Healthcare Industry Built on Premature Death: On the cruelty of private healthcare corporations.” As Chamseddine writes, “The industry is an architecture of misery, extracting profits from suffering. According to a report published in 2017 by The Doctor-Patient Rights Project, insurance companies “denied treatment coverage to one-in-four (24 percent) patients with a chronic or persistent illness or condition; 41 percent of the patients denied coverage were denied once, while 59 percent were denied multiple times.” Thirty-four percent of patients who had been denied coverage were forced to put off treatment, despite having a chronic illness. An astounding 70 percent of treatments for a chronic illness denied by insurers were for conditions referred to as “serious.” The grim reaper disguises himself in many forms, in this case that of an insurance agent.”

At shareblue.com, Oliver Willis has some talking points for Democrats regarding Republicans and veterans. As Willis reports, “Acting Office of Management and Budget (OMB) Director Russell Vought testified before the House Budget Committee on Tuesday…In his 2019 budget, Trump has proposed rounding down the cost-of-living adjustments given to veterans. Military Times notes that the idea “has been decried by veterans groups in the past as unfairly using their earned benefits to balance the budget.”…Vought said, “We don’t think [the cuts] will have any adverse impact” when asked about the attack on veterans by Rep. Seth Moulton (D-MA)…”No adverse impact? No adverse impact to decreased cost of living adjustments?” Moulton asked incredulously…”That’s correct,” Vought replied. “I think you should speak to some veterans, Mr. Vought,” the congressman replied, ending the exchange…The cold dismissal of veterans’ concerns is the latest in a long line of slights and attacks on the military from Trump. He largely views the armed services as a useful backdrop for his presidency, via venues like parades, rather than as an institution to be supported and respected…In the same budget document, Trump fraudulently takes credit for the “largest” increase in military pay in a decade, but the military received larger increases twice under Obama.”

Eric Levitz has some bad news for Dems at New York Magazine’s Intelligencer: “In Wisconsin’s gubernatorial race last year, Democrat Tony Evers defeated Scott Walker by one percent statewide — but won a majority of votes in only36 of the state’s 99 Assembly districts. That same night, Democratic candidates won 53 percent of all ballots cast for the state Assembly, even as Republicans won a 27-seat majority in that body…In other words: The 2018 midterms confirmed that the GOP has gerrymandered Wisconsin’s electoral maps so aggressively, it will be essentially impossible for the Democratic Party to gain control of that (purple) state’s legislature until its maps are redrawn…This point was not lost on the Wisconsin GOP. Immediately following Evers’s victory, Republicans convened a special legislative session to transfer powers from the popularly elected branch of government that Democrats had just won to the undemocratically elected branch that the GOP couldn’t lose…These developments forced Wisconsin Democrats to confront a harrowing possibility: that their triumph in the governor’s race would not stop the GOP from locking up the state legislature for another decade.” 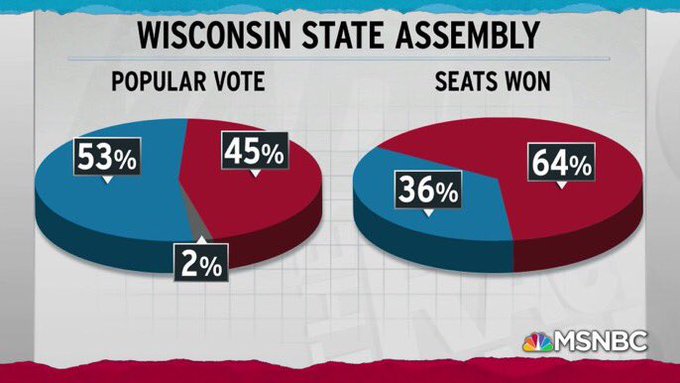 Nonetheless, “A number of Senate Democrats are ready to follow through on an idea that some 2020 candidates — and a good chunk of Americans — support: abolishing the Electoral College,” Li Zhou reports at vox.com. “This week, Sens. Brian Schatz, Dick Durbin, Dianne Feinstein, and Kirsten Gillibrand introduced a constitutional amendment that would abolish the Electoral College, a position that’s become increasingly popular among 2020 candidates as the election gets underway. The ratification of the amendment would mean presidential candidates would be directly elected by the national popular vote. Separately, Sen. Jeff Merkley has also introduced a package of election reforms, including a bill aimed at getting rid of the Electoral College.” Like many other bills Democrats are introducing, this one won’t be enacted until at least after the election, due to knee-jerk GOP opposition. But introducing these bills and opening debate is important for educating the public and building support for their enactment.”

From Harper’s Magazine Index: “Number of the twenty least prosperous US congressional districts that are represented by Republicans : 16…Of the twenty most prosperous districts that are represented by Democrats : 20…Percentage of statewide elections in the Deep South won by Republicans since 2008 : 97…Percentage of Southern white Americans who say the country must  “protect and preserve its white European heritage” : 30.”

The Boston Review’s forum, “Economics After Neoliberalism: Contemporary economics is finally breaking free from its market fetishism, offering plenty of tools we can use to make society more inclusive” provides lots of interesting insights about the ‘dismal sciuence’ in current context. One excerpt: “Economics is still somewhat insular within social sciences because of its methodological predilections: methodological individualism, model-based abstraction, mathematical and statistical formalism. But in recent decades economists have reached out to other disciplines and have incorporated many of their insights. Economic history is experiencing a revival, behavioral economics has put homo economicus on the defensive, and the study of culture has become mainstream. At the center of the discipline, distributional considerations are making a comeback. And economists have been playing an important role in studying the growing concentration of wealth, the costs of climate change, the concentration of important markets, the stagnation of income for the working class, and the changing patterns in social mobility.”