In their vox.com article, “The big divide among 2020 Democrats over trade — and why it matters: Democrats are on the brink of completely reorienting their party on trade,” Tara Golshan and Dylan Scott provide a revealing primer on the recent history of Democratic trade policies and current policies of Democratic presidential candidates, including the following chart, which will likely provoke some arguments: 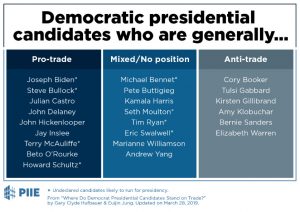 “Because the most powerful answer to the big lie is the big truth, Democrats should champion a platform of patriotism and Americanism, on issues foreign and domestic, throughout the 2020 elections…Democrats should not “pivot” from talking about the Russian attack against America to talking about the Trump attack against health care for Americans. We should talk about both…A patriot platform for Democrats in 2020 would include a powerful statement about core values of Americanism. Our presidents should be chosen by Americans, not Russians. Government must serve the people by offering them a better life, higher wages and improved health, rather than ripping off the people with a scandal-ridden regime that treats the government of the people as a piggy bank for greed, sweetheart deals, nepotism and insider corruptions.” –from Brent Budoiwsky’s “A patriot platform for 2020 Dems” at The Hill.

Carrie Dann reports that “According to a new NBC News/ Wall Street Journal poll, 29 percent of Americans say they believe Trump has been cleared of wrongdoing, based on what they have heard about Mueller’s findings, while 40 percent say they do not believe he has been cleared,” Carrie Dann reports at nbcnews.com “But a third of Americans — 31 percent — say they’re not sure if Trump has been cleared. That includes nearly half of independents (45 percent) and about a quarter of both Democrats (27 percent) and Republicans (25 percent.)..The public is still in a wait-and-see view of this investigation and what it means for Trump,” said Jeff Horwitt of the Democratic firm Hart Research, which conducted the poll along with Republican pollster Bill McInturff of Public Opinion Strategies.”

FiveThirtyEight’s Dhrumil Mehta notes that “A Morning Consult/Politico poll conducted after special counsel Robert Mueller ended his investigation into Russian interference in the 2016 election found that 47 percent of registered voters still think that Trump tried to “impede or obstruct the investigation,” even though Barr’s summary of Mueller’s report did not make a determination on whether the president obstructed justice” and that “74 percent of registered voters, including 56 percent of Republicans and 84 percent of Democrats, told YouGov in a poll this week that they think the full contents of Mueller’s report should be made public.”

A nifty graphic from Kyle Kondik’s “This Century’s Electoral College Trends: Tracking the strength of the parties in all 50 states ‘ at Sabato’s Crystal Ball:

In “Other Polling Nuggets,” Mehta also notes that “Half of registered voters say that presidential elections should be determined by the national popular vote, while 34 percent say they should be determined by the Electoral College, according to another Morning Consult poll. Seventy-two percent of Democrats thought the national popular vote should decide elections compared to just 30 percent of Republicans, whereas 57 percent of Republicans preferred the Electoral College compared to 16 percent of Democrats.”

At The Daily Beast, Gideon Resnick explains why Democratic presidential candidates are “racing to post large fundraising numbers by the end of the first quarter on March 31” and noters that “A poor showing on the number of donors could be a death blow for some of the top-tier Democrats in the race, signifying that they lack the support and financial viability to make it through. The number of individual contributors, after all, demonstrates not just the extent of a campaign’s grassroots support, but also indicates a strong foundation for future fundraising, since a large pool of small donors can be hit up for cash again and again…the real competition among the field is not so much who can bring in the biggest haul, but which candidate can get the most people to contribute. That’s the number that the top money people on various campaigns say they will be watching when the deadline hits.”

In her article, “The New Politics of the Retirement CrisisAs 18 million Baby Boomers brace for the financial insecurity of old age, Democrats are pushing to expand Social Security and other elderly benefits.” at The New Republic, Rachel Cohen reports that “46 percent of Americans expect to be financially insecure when they retire, anticipating their government and employers will do next to nothing to help them. But these grim fears also open up a political opportunity. In the last election cycle, Democrats campaigned heavily on health care (by mid-October, 55 percent of their television ads centered on the issue). It’s this focus, many suspect, that helped them improve their margins among elderly voters, with seniors casting their ballots almost evenly between the two parties—a marked shift from years past…There are signs that retirement will play a significant role in the 2020 race. In February, Bernie Sanders reintroducedthe Social Security Expansion Act, with sponsorships from three other leading Democratic presidential contenders: Cory Booker, Kirsten Gillibrand, and Kamala Harris. They belong to a congressional caucus dedicated to increasing Social Security benefits. Formed last fall, it already has more than 150 Democratic members, and Sanders and Elizabeth Warren, another presidential candidate, are its co-chairs in the Senate.

Sean J. Miller of Campaigns & elections reports that “During winning Senate races last cycle, campaigns on weighted average spent only 4-7 percent of their media budgets on digital, according to a new report by Tech For Campaigns, a non-profit that provides technology services to campaigns on the left…The report puts digital spending last cycle at $623 million, which is below earlier estimates which pegged it around $950 million…The average spend on digital overall for campaigns and PACs in 2018 was 2.7-5.1 percent, with 50 percent of the media budget going to TV and direct mail…Jessica Alter, co-founder of TFC, called the percentage of digital spending “shockingly low.”…The 2019 C&E/PSB Research State of the Campaign Industry Poll found a large majority of political professionals believe digital spending will actually reach parity with TV spend by the 2024 presidential cycle.”