A couple of weeks ago, we reported on field interviews showing Virginia voters’ overwhelming support for increasing teacher pay. These voters — even Republicans — were willing to pay an average of $19-$25 more per month in taxes to give teachers raises.

There are many proposals under debate to address income inequality through taxation on the wealthy, an indicator of the political importance of tax policy.

We took a long view of the importance of tax policy to voters, including different economic and demographic segments. Overall, while there was some uptick in interest in 2016, the share of voters focused on taxation has been relatively modest over the last seven years. 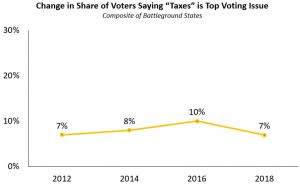 Unsurprisingly, Republican-leaning and higher-income voters are consistently the most focused on taxes, while people of color and Democratic-leaning voters are consistently the least likely to focus on these issues. Swing voters and white voters have had the greatest fluctuation in focus. Interestingly, following the 2017 Trump tax cuts, comparatively fewer voters are concerned about tax policy, an indication that the biggest GOP accomplishment has limited political appeal.

What if we could shift the debate to make fair and adequate taxation a strength for progressives?

We know from experience and experimentation that Working America canvassers alter the frame through which voters consider the issue of taxes. Instead of focusing on limited government, they shift the focus to equitable investment in society.

1. Unexpected support. We know that we can find support, sometimes in many of the most unexpected places. A 47-year-old woman in Gainesville, Virginia, recently told our canvasser that she felt we have “the right person in the White House” and supported vouchers. Yet, she was willing to pay $30 more each month in taxes to improve public schools.

2. Make it local. Connecting taxes to local investment priorities instead of distant politicians can build dramatic support. In a clinical test targeting conservative voters in California’s Central Valley, we increased support for Proposition 6, the state’s infamous gas tax that funds infrastructure, by a whopping 14 percentage points in one conversation. By centering the conversation on local bridges and roads rather than statewide politics, voter opinion moved dramatically.

3. Tax fairness matters to working-class voters. In the Chicago suburbs — an area filled with tax-sensitive voters — we engaged voters on the issue of worker misclassification. Most of the voters, who were employed in traditional, full-time jobs with benefits, could not relate to the importance of workers being wrongly treated as independent contractors. But when we presented the issue as businesses shifting the tax burden to the voters because they skipped paying millions in employment taxes, that message resonated. As a result, hundreds of voters signed a digital petition to the state attorney general demanding enforcement.

Conservatives have strategically pushed austerity, disinvestment and public subsidies for the wealthy.

Rather than fighting for scraps under austerity, we go door-to-door and shift the framework entirely to investment in matters that affect people in their day-to-day lives.

Our experience says that we have a critical window to shift to a tax equity and investment paradigm if we can connect the dots for enough people in key battlegrounds. The more voters understand, the more they demand justice.