Mark Joseph Stern explains how “Florida Republicans Are Sabotaging a Constitutional Amendment That Gave Felons the Right to Vote” at slate.com: “In November, a supermajority of Florida voters approved a constitutional amendment restoring voting rights to former felons who’ve completed their sentences. On Tuesday, Florida Republicans advanced a bill that will strip hundreds of thousands of these individuals of the franchise once again….That measure, which GOP lawmakers voted out of committee along party lines, is a direct assault on Amendment 4, which altered the state constitution to reinstate felons’ right to vote. It is an astonishing rejection of Floridians’ overwhelming support for the amendment and a flagrant power-grab designed to suppress potential Democratic votes. And because the Florida Legislature, governorship, and Supreme Court are dominated by Republicans, the bill stands an excellent chance of becoming law, reversing the biggest voting rights victory of the 21st century so far…Shortly after the 2018 election, it became clear that Republican lawmakers would attempt to undermine Amendment 4. By its own terms, the law is self-executing; it requires no implementation by the Legislature. Floridians who have completed a sentence for a felony conviction should now be permitted to vote, so long as they did not commit homicide or a sex offense. Yet GOP Gov. Ron DeSantis (who opposed the amendment) and his allies in the Legislature quickly asserted that it is not self-executing and requires “implementing language.” That’s not true, but it allowed Republicans to curtail the amendment’s impact under the guise of “implementing” it. Since November, the key question was how brazenly GOP lawmakers would seek to subvert the amendment: Would they tinker around the edges, or gut the law entirely?”

The good news is that Tallahassee Mayor Andrew Gillum, narrowly defeated in the contest for Florida’s governorship in November, has launched a major voter registration campaign, “Bring it Home Florida,” named after his campaign slogan. Gary Fineout reports at Politico: “There are currently 4.96 million registered Democrats in the state compared to 4.7 million Republicans and nearly 3.6 million voters with no party affiliation…Gillum, whose political committee Forward Florida still has nearly $3.9 million available, hinted at his plans earlier in the year…“In this period of time, whatever resources that I raise and time and energy I spend in this state is going to be around voter registration and deep-level engagement, so that when we have a nominee, we have an apparatus we can turn on,” Gillum said in January…Trump’s campaign is heavily focused on Florida, the biggest swing state in the nation, with 29 of the 270 electoral college votes needed to win. Without the Sunshine State, Trump’s path to victory narrows significantly…Steve Schale, a Florida political consultant who worked for President Barack Obama, said that Democrats need to do a better job of registering voters in Florida. On his blog this week, he said that the voter registration advantage held by Democrats has fallen by 400,000 voters over the last 10 years…Democrats say they have identified as many as four million Floridians eligible to vote who are not registered. Florida party officials say they plan to partner with data science firms and hire dozens of full-time organizers as part of the new $2 million effort.”

Should Democrats raise more hell about dental care not being included in Medicare? Read Darla Mercado’s “Medicare won’t cover this key expense, and it’s eating into retirees’ wallets” at cnbc.com, and you will be left with the impression that it could, indeed be a popular issue, especially with many high-turnout senior voters. Mercado notes that “Nearly 7 out of 10 Medicare beneficiaries have no dental coverage at all, according to data from the Kaiser Family Foundation. Half go without seeing a dentist.” Also, “the average Medicare enrollee spent an average $922 in out-of-pocket dental costs…In all, 65 percent of Medicare beneficiaries, or 37 million people, have no dental coverage, according to recent data from the Kaiser Family Foundation.” Comprehensive health security means every health need, as well as everybody.

At FiveThirtyEight, Perry Bacon, Jr.’s “What The Big Sanders And O’Rourke Fundraising Numbers Don’t Capture” provides a good read for Democrats interested in campaign fund-raising strategies. Bacon notes that the early fund-raising totals of the Sanders and O’Rourke campaigns don’t show a lot of donor diversity. But Bacon also provides some stats that could be helpful to Democratic campaigns in targeting possible donors. Here’s just one excerpt “When asked by the Pew Research Center in the fall of 2016 if they had donated to a political campaign over the previous year, 24 percent of Democrats with incomes between $75,000 and $150,000 said they had, compared to 8 percent of those with incomes below $30,000. Donating to campaigns was also more common among people with more education (33 percent of Democrats with postgraduate degrees had donated, compared to 6 percent who did not attend college), older people (32 percent among those over 65, 11 percent of those ages 18-29) and white people (21 percent of white Democrats, 7 percent of Latinos.2)”

“Support for impeaching President Donald Trump has fallen 7 points since December, a CNN Poll conducted by SSRS finds, following Speaker of the House Nancy Pelosi calling impeachment “so divisive to the country,” Jennifer Agiesta reports at CNN Politics. “The decline — from 43% in favor in December to 36% now — stems largely from a change in Democratic views on impeaching the President. In December, 80% of self-identified Democrats said they were in favor of impeachment — that now stands at 68%, a 12-point dip. Among independents and Republicans, support for impeachment has fallen 3 points over the same time…The only major subgroup among which the decline was larger than among Democrats is college graduates: 50% backed impeachment in December, 35% do so now. Combining the two to look at Democrats with college degrees, support for impeachment fell 17 points from 79% in December to 62% now. RELATED: Full poll results.

Some intriguing stats from Kyle Kondik’s “This Century’s Electoral College Trends” at Sabato’s Crystal Ball: “The most dramatic recent shift in Virginia came from 2004 to 2008, when the Old Dominion moved from giving Democrat John Kerry just 45.9% of the two-party vote to giving Democrat Barack Obama 53.2%, a 7.3-point jump in vote share (and a 14.6-point jump in margin). Of course, the nation as a whole moved from 48.8% for Kerry in 2004 to 53.7% for Obama in 2008, an increase of 4.9 points. Part of the Virginia story is that it shifted more dramatically from 2004 to 2008 toward the Democrats than the nation as a whole did…Some broad patterns emerge. “Generally speaking, the Sun Belt and West are trending Democratic. The Midwest and North more broadly, along with Greater Appalachia, are trending Republican…Generally speaking, much of the West and parts of the South were more Democratic relative to the national voting in 2016 than they were in 2000, while much of the Midwest, Greater Appalachia, and New England were more Republican relative to the nation in 2016 than they were in 2000.” Kondik also shares some revealing graphs showing regional trends in party voting.

Alex Shephard writes at the New Rerpublic that “the Democratic Party is moving left, whether they like it or not. Forty-six percent of Democrats and Democrat-leaning voters now identify as “liberal,” up from just 28 percent a decade ago. At the same time, the percentage of people identifying as “moderates” has fallen from 44 to 37. When Obama was elected, one could accurately describe the Democratic base as being moderate, but that’s no longer true anymore. As The Atlantic’s David Graham wrote last year, registered Democrats have become more liberal on immigration, economics, and race over the same period. Increasing taxes on the rich, Medicare for All, and a jobs guarantee all poll well today.”

In “Removing Barriers to Voting Improves Turnout” at The Washington Monthly, Nancy LeTourneau presents some voter turnout data and graphs, including: According to a report from Nonprofit Vote and the U.S. Elections Project, voter turnout in the 2018 midterms was the highest its been in over 100 years…Seven of the 15 states with same day registration (SDR) were among the top ten states in voter turnout…Eight of the ten lowest turnout states have registration deadlines four weeks before the election…Three of the four vote at home (VAH) states ranked in the top seven of 2018 voter turnout…Registration growth was nearly four times higher in the five states reporting automatic voter registration (AVR) data in 2018.” 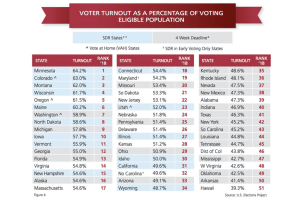