Former federal prosecutor Ken White explains why “Republicans Committed the Classic Cross-Examination Blunder” at The Atlantic: “Republicans committed the classic cross-examination blunder: They gave the witness the opportunity to further explain his harmful direct testimony. They provided Cohen with one slow pitch up the middle after another, letting him repeat the cooperating witness’s go-to explanation like a mantra: I did these bad things so often and so long because that’s what it took to work for your guy. I have seldom seen a cross-examination go worse.” White also faults Democrats for failing to support Cohen’s credibility and seize the “opportunity to build the outline of a case against Trump.” But White undervalues the inspiring closing comments of House Oversight and Reform Committee Chairman, Rep. Elijah Cummings, which put Cohen’s testimony in clear moral perspective — the kind of leadership that impresses voters more than legal score-keeping.

It kind of got lost amid the coverage of the Cohen testimony and Trump’s fake N. Korea summit. But Speaker Pelosi and the Democrats scored another victory by passing “a universal background check bill — which, if the Senate were interested in passing it, would be the most significant gun control legislation in a generation,” according to German Lopez, writing at vox.com. Lopez notes further, “Under current federal law, licensed dealers are required to run a background check to make sure a buyer doesn’t have a criminal record, history of mental illness, or any other factor that legally bars him from purchasing a gun…But the law has a big loophole: Private sellers — meaning unlicensed sellers — don’t have to run a background check. So someone who doesn’t run a licensed gun shop can sell or gift a firearm at a gun show, over the internet, or to friends and family without verifying through a background check that the buyer isn’t legally prohibited from purchasing the weapon…The new bill, HR 8, would close this loophole, although it would leave some exemptions for gun transfers among family and temporary transfers (like lending a gun) while hunting.” True, the bill is limited in scope and it’s not going to pass under Trump and McConnell. But it shows that a Democratic majority means passing legislation that can save lives, a big plus with voters who want something done about gun violence.

“To avoid watching in horror as the Senate slips away forever while the Electoral College map becomes ever more daunting, liberals need a long-term strategy to combat the decline of heartland cities—to turn Clevelands into Denvers,” writes Daniel Block in his article, “To Take Back the Map, Democrats Need a Plan to Revive Heartland Cities” in The Washington Monthly. “To do so, they need to first recognize that geographic inequality did not come out of nowhere. It is not the inevitable product of free market forces clustering new skill and innovation around where all the old skill and innovation are found—nothing makes people in St. Louis or Milwaukee any less talented than people in San Francisco or Washington, D.C. Instead, it’s the result of nearly four decades of policy choices in Washington—such as giving large banks and other corporations in elite coastal cities free rein to acquire rival firms headquartered in cities in America’s interior. This has stripped those interior cities of what were once their economic engines, even as it has enriched the already wealthy coastal megalopolises…Fixing America’s regional inequality would be a good idea irrespective of its political implications. It would increase innovation and GDP across the country. With economies, as with professional sports leagues, having more cities that can compete ups everyone’s game. It would help curb the broader scourge of income inequality. And it would improve our quality of life by making it easier for talented people to stay with family and friends in the communities where they grew up, or to move wherever else they might like to go, rather than being channeled to a handful of overly expensive, traffic-choked megacities.”

Umair Irfan’s “How Trump’s EPA is letting environmental criminals off the hook, in one chart” at vox.com provides a sharable graphic for voters concerned about climate change: 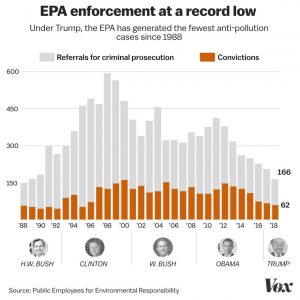 Some notes from a westernpriorities.org study, “Winning the West,” which analyses polling of different groups, including: ticket-splitters; millenial parents; empty-nesters; anglers/hunters; CORE; Cable-news-watchers; and social media users (hover over icon for stats): “The Casual Outdoor Recreation Enthusiast (CORE), makes up about two-thirds of the western electorate. If you like to take nature walks, hike, camp or bird watch you are a CORE voter too. This group is important because they actively participate in outdoor activities that any of us can do. They are passionate about the outdoors and public lands too….87% say public lands, parks and wildlife issues are important factors in how they decide on which candidate to vote for…76% oppose significantly reducing the size of national monuments, including shrinking Utah’s Bears Ears by more than 80 percent and Grand Staircase-Escalante by 50 percent….86% say the outdoor recreation economy is important.”

Eliza Newlin Carney writes at The American Prospect that “Republicans are quietly scrambling to catch up with Democrats in low-dollar fundraising, which was pivotal to the 40-seat pickup that put Democrats back in control in the House, and is increasingly becoming the holy grail of modern campaign financing…The small-donor craze is playing out both on Capitol Hill, and on the presidential campaign trail, where raising large sums via low-dollar contributions—anywhere from $3 to $200 apiece—has become a leading measure of viability in the sprawling Democratic field. In the House, more than three dozen freshman Democrats who swore of corporate PAC contributions on the campaign trail are also test-driving a new “subscription” model of fundraising built around small, recurring, monthly donations…New York Democrat Alexandria Ocasio-Cortez has likened the monthly, low-dollar gifts that make up the bulk of her campaign receipts to “Netflix, but for unbought members of Congress.” Ocasio-Cortez raised more from small donors in the midterm than any other incoming freshman—close to 62 percent of her $2 million war chest. She has touted the “Netflix” model as a means to free her from the ‘round-the-clock fundraising that has become the scourge of life on Capitol Hill, and that helped drive a near-record 52 House members to retire instead of seeking re-election in 2018.”

Writing at Sabato’s Crystal Ball, Kyle Kodik finds that “Our initial Electoral College ratings reflect a 2020 presidential election that starts as a Toss-up…We start with 248 electoral votes at least leaning Republican, 244 at least leaning Democratic, and 46 votes in the Toss-up category…The omissions from the initial Toss-up category that readers may find most surprising are Florida and Michigan…Much of the electoral map is easy to allocate far in advance: About 70% of the total electoral votes come from states and districts that have voted for the same party in at least the last five presidential elections.” Kondik ads that “We close with the final 46 electoral votes, the Toss-ups. They come from four states — Arizona, New Hampshire, Pennsylvania, and Wisconsin — as well as one congressional district, Nebraska’s Second, which is based in Omaha…Arizona, to us, is the best target for Democrats among the usually Republican Sun Belt states that have been becoming more competitive (a group that also includes Georgia, North Carolina, and Texas). Arizona’s voting is dominated by Phoenix’s Maricopa County, one of the nation’s only very populous counties that is gettable for a Republican presidential candidate. But the trendlines for Republicans in such counties are generally poor, a factor that can’t be discounted in a country where local political eccentricities are increasingly being overtaken by one-size-fits-all trends.”

At Politico, Burgess Everett and James Arkin take a peak “Inside Schumer’s plot to be majority leader” and note, “Schumer said he’s not giving a hard sell to prospective candidates, but that he is laying out the advantages of joining his dogged pursuit of the majority: A chance to control the agenda, potentially with unified Democratic control of Washington in 2021….“We’re finding that people are stepping up to the plate,” he explained. “What I tell anybody who I think would be a good candidate [is] that the Senate is a very good job. I don’t try to dissuade them from running for something else.”…Regardless of the number of headaches ahead for the famous political micromanager, Schumer is in a far better position than he was in 2018 when he was defending 10 seats in Trump country with a narrow path to the majority. Now, he’s on offense — yet how wide his party’s campaign will extend is yet to be determined…Schumer and Democratic Senatorial Campaign Committee Chair Catherine Cortez Masto (D-Nev.) are working to get candidates who can transform races that Republicans might otherwise be easily favored to win. Schumer is aiming to persuade ex-fighter pilot Amy McGrath to take on McConnell in Kentucky, as well as Stacey Abrams to challenge Sen. David Perdue (R-Ga.)…Schumer doesn’t want to appear too bullish — already eyeing 2022 even as he firms up his candidates in 2020. “It’s better than last time,” Schumer said of his prospects in 2020. “It’s not as good as two years from now. But it’s good.”

In her article, “The Missing Black Millennial” at The New Republic, Reniqua Allen writes, “Black millennials, like others in their generation, are frustrated with the current system. Participation among black millennials in presidential elections dropped between 2012 and 2016, according to Pew, with turnout at 55 percent and 51 percent, respectively. That could partly be attributed to Obama no longer leading the Democratic ticket. But black millennials also supported Bernie Sanders in the 2016 primary, while their parents went for Hillary Clinton, an indication that young blacks are disillusioned with the establishment and hungry for the kind of economic freedom promised in Sanders’s more far-reaching platform…Perhaps young blacks are guilty of being that most unforgivable of millennial sins: entitled. But our sense of entitlement does not revolve around avocado toast and CBD lattes. Our sense of entitlement, or at least mine specifically, comes from the notion that the richest nation on earth can provide all of its citizens with basic necessities.” Allen goes on to explain the developing  sense of betrayal of hope shared by young people of her generation and race and how it gets buried in MSM coverage and misunderstood by the public. Her article is a good read for Democratic campaigns.