In his post, “How AI-Assisted messaging Can Help Democrats in Shutdown Fight,” At Campaigns & Elections, Michiah Prull, co-founder and CEO of Avalanche Strategy, reports on the findings of a new study of attitudes about immigration conducted by his firm: “Even among first and second generation immigrants—a segment of the American electorate we might expect to skew sympathetic to immigration—there’s a significant portion of voters who express a belief that they followed the rules in order to be a part of this country, and others should too…Americans who relate to immigration through a Fairness lens are very concerned about people getting what they deserve based on their actions. This “reap what you sow” version of fairness is a significant aspect of the moral reasoning that drives support for stricter enforcement of immigration laws…In our research, this value was very clearly tied to a belief that immigrants are receiving a great amount of taxpayer support, while ordinary Americans are left to struggle on their own. We saw this in particular among union members and soft conservative suburban woman, who may express high levels of care and concern for the struggles of immigrants, but feel a strong sense of unfairness about their perception that immigrants receive greater benefits, support and opportunity than their own families receive…Whether we agree with them or not, viewing the current standoff through the lens of these values and narratives explains why the border wall is such a powerful symbol for Trump’s base. For many of them, the wall is a physical manifestation of a deep and emotional attachment to the need to respect authority and to feel fairly treated compared to other groups…By understanding the deep why behind the border wall, Democrats can frame their communications to ameliorate and even attract elements of that base.”

Aaron Rupar shares the results of some new polls at vox.com on Trump’s tanking approval numbers as a result of his shutdown, including: A “Politico/Morning Consult poll finds that a majority of voters — 54 percent — blame Trump and congressional Republicans for the shutdown, compared to 35 percent who blame Democrats…A CBS News poll “finds that 71 percent of Americans “don’t think the issue of a border wall is worth a government shutdown, which they say is now having a negative impact on the country.”…The poll “also finds that Americans think House Speaker Nancy Pelosi (D-CA) is doing a better job than Trump at handling the shutdown.”…CNN’s latest poll of polls also shows Trump’s approval rating dramatically underwater” with 57 percent disapproval, while a Marist/NPR/PBS poll indicates  “a majority of registered voters — 57 percent — say they will definitely vote against him in 2020” and “two-thirds of Americans want him to agree to a budget without wall funding as a way to end the shutdown.” In addition, an Emerson College poll finds that “57% said it was time to give someone else a chance while 43% said President Trump deserves to be re-elected.”

Also at C & E, Sean J. Miller reports that a new “study backs the effectiveness of digital advertising to increase turnout among Millennial voters in competitive local elections.” As Miller notes, “Researchers Jay Jennings and Katherine Haenschen said their study, published this month in the academic journal Political Communication, is “the first evidence that online ads can positively impact turnout…this is the first study that shows with scientific rigor that exposure to internet ads increases turnout,” Haenschen, a practitioner-turned-researcher at Virginia Tech, told C&E…The research centered on a $50,000 digital ad campaign during a non-partisan May 2017 Dallas municipal election where the mayoral seat wasn’t up…The study was conducted in Dallas at the request of the publisher of the Dallas Morning News “due to the city’ s historically low levels of municipal participation particularly among Millennials.”. Miller adds, “After the Saturday Election Day, turnout was measured using public voting records. Haenschen said they increased voter turnout by 0.9 percent among people exposed to the ads.” She notes, however, that “digital spots are “not the most cost-effective method” for voter turnout. That would be social pressure mailers, which can increase turnout by up to 3 percent. But digital ads, she said, are great for targeting voters for turnout in hard-to-reach areas — apartment dwellers or people in gated communities.“This is a tool that should be used in compliment with broader campaign strategy,” she said.”

If you want to get up to speed on democratic reforms in the states, read Amy Hanauer’s “States of Change” at The American Prospect, which notes a number of encouraging developments, including: “While not perfectly correlated, higher minimum wages, more per-pupil education spending, more health-care access, lower incarceration, and more progressive taxes tend to cluster in states where Democrats have had more power. There are surprises—Massachusetts, Illinois, and Colorado have flat income taxes that fall more heavily on poor people; Washington, despite the litany of pro-worker policies, still has no income tax. But places led by progressives do more progressive things. And it pays off—education, income, life expectancy, and other measures of well-being are generally higher in places with liberal policies.” Also, “Naomi Walker, who directs the Economic Analysis and Research Network out of the Economic Policy Institute, sees more opportunities for state-level worker justice than Americans have had since 2010, when Republicans gained control in many states. “We have a chance not just to get back to where we were but to make advances,” she says.”

“States with a smaller population than Los Angeles County” — a compelling graphic that shows why the ‘two senators for every state’ thing needs to be corrected: 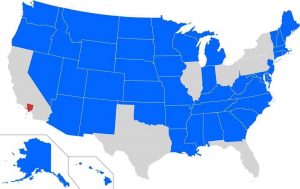 In “Midterms Showed That Midwestern Economic PerformanceCould Decide 2020 Race,” John C. Austin writes at Brookings: “Of course, economic evolution in many of the Midwest’s small and medium-sized industrial cities—which can be viewed as both an economic andpolitical priority—won’t happen overnight. But until then, experts suggest, the winning political path for Democrats in key Midwest states appears to be one of “both-and.” As political observer Ruy Texeira observed in the Washington Post: “Carry white college graduates, strongly mobilize nonwhite voters, particularly blacks, and hold deficits among white non-college-educated voters in the range of 10 to 15 points. Unlike Hillary Clinton in 2016…Democrats in Pennsylvania, Michigan, Wisconsin and Minnesota got all three parts of the formula right in the midterms.”

It’s only January, but If they gave awards for the lamest op-ed of 2019, WaPo columnist Marc A. Thiessen’s, “Trump is being the adult in the room on the shutdown” would be a safe bet for the category. Yes, Thiessen’s cheesey message du jour for the GOP echo chamber was in The Washington Post, not The New York Post. And no, it was not just a rogue head-line writer’s descent into drugged dementia; Thiessen actually went there, as in “Trump is being the adult in the room” a few graphs into the redolent rant.

For those who prefer less unhinged conservative analysis, David Bier’s “Senate GOP Bill Doesn’t Extend DACA. It Guts It” at The Cato Institute offers the following observation: “This weekend, President Trump promised to an “extension” of DACA for the “700,000 DACA recipients brought here unlawfully by their parents at a young age many years ago.” But the Senate bill that Senate Majority Leader Mitch McConnell introduced to implement his deal does not extend DACA but rather replaces it with a totally different program that will exclude untold thousands of Dreamers who would have been eligible under DACA.” Also, the bill provides “less than 3 years of relief from deportation and work authorization, not a pathway to citizenship.” Bier concludes, “Commentators should not describe this bill as “extending DACA” or even extending that status of DACA recipients.”