Despite Democratic improvement in support from rural voters in congressional disticts in the midterm elections over 2016, Nathaniel Rakich writes at FiveThirtyEight that “One theme of the 2018 election was that Democratic senators from rural, red states became an endangered breed. Three Democratic senators on deep-red turf — Joe Donnelly of Indiana, Claire McCaskill of Missouri and Heidi Heitkamp of North Dakota — lost their seats. Two others managed to squeak out wins — Jon Tester of Montana and Joe Manchin of West Virginia — but they saw their support shrivel up in many parts of their states…In the six years since these senators last appeared on the ballot (in 2012), Democratic support has become increasingly confined to America’s metro areas…These five Democratic incumbents didn’t all manage that; as it has for Democrats nationally, their support deteriorated significantly relative to 2012 in areas outside of cities and suburbs, according to a county-by-county analysis of U.S. Senate results.”

Ella Koeze’s graphic comparison accompanying Rakich’s FiveThirtyEight article, illustrating the difference between county results in the five states in 2012 and 2018: 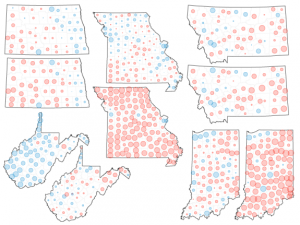 Yes, they are older guys. But “Joe Biden and Bernie Sanders are both way more popular than Donald Trump,” as Matthew Yglesias reports at Vox. “Joe Biden and Bernie Sanders are the best-known members of the Democratic Party’s very crowded 2020 primary field, and they are both more popular than Donald Trump, according to a new Quinnipiac University national poll…The two other moderately well-known Democrats — Elizabeth Warren and Michael Bloomberg — both fare less well with underwater favorable ratings. Everyone else, including Beto O’Rourke, Sherrod Brown, Kamala Harris, Cory Booker, and Kirsten Gillibrand, is fairly obscure, with a majority of the public offering no opinion so far…In contrast to Trump, Joe Biden’s numbers look fantastic with a 53/33 favorable/unfavorable split. Democrats love Biden, with 84 percent approving, and he’s above water with essentially all demographic subcategories.” Yglesias breaks down the demographic components of support for the two Democrats, and notes that Biden is substantially more popular with African Americans, white males and seniors than Sanders, but Sanders has an edge over Biden with younger voters and Latinos. Biden also does a litle better with working-class whites than does Sanders, though both are under 50 percent approval with this large constituency.

In her CNN Politics article, “3 Kansas legislators switch from Republican to Democrat,” Sophie Tatum reports the good news for Democrats. “Two state lawmakers in Kansas announced on Wednesday that they would be switching their political party — from Republican to Democrat…In separate Facebook posts, state Rep. Stephanie Clayton and state Sen. Dinah Sykes said they would now be serving as Democrats in the state Legislature…Last Wednesday, Kansas state Sen. Barbara Bollier also had announced she would be leaving the Republican Party and would come back in 2019 as a Democrat.” Clayton cited the Republicans killing a “bipartisan education plan” in her statement, while Sykes noted “the Republican party focusing on issues and approaches that divide our country. I do not agree with that approach.”

“Americans are scattered and divided over which source they most trust for news,” reports Emily Guskin at The Fix. Among the findings of Guskin’s report on television news preferences: “A Washington Post Fact Checker poll used an open-ended format to ask what source of information viewers trust most for political news, which could include a person, company or organization. Cable news networks overall topped the list of responses, with 22 percent mentioning CNN (11 percent), Fox (9 percent) or MSNBC (2 percent), compared with a total of 5 percent who mentioned either ABC News, CBS News or NBC (together, 5 percent mention NBC or MSNBC)…Partisans split in trust for Fox News and CNN, with Fox volunteered as the most trusted by 22 percent of Republicans but just 1 percent of Democrats, while CNN is most trusted by 19 percent of Democrats but only 3 percent of Republicans. MSNBC is mentioned by 3 percent of Democrats as most trustworthy, while no Republican respondents mention the network.” Guskin also reports on data from a Pew Research Center and a 2018 Poynter Media Trust Survey on viewer preferences for television news. (There was no data on how TV compared to use of other internet sources).

For a good update on Democratic prospects in the Lone Star state, read “Is Texas finally turning blue? We looked at the electorate to find out” by Juan Carlos Huerta and Beatriz Cuartas at The Monkey Cage. As Huerta and Cuartas explain, “Although O’Rourke fell short, Democrats picked up 12 seats in the Texas House, two seats in the Texas Senate and two seats in the U.S. House, and came close in several statewide races. Nor were these anomalies. In the 2016 presidential election, Hillary Clinton lost the state by only nine points, much less than Barack Obama’s 16-point loss in 2012…The state’s diversifying electorate and young people’s leftward shift appear to be weakening the GOP’s grip on the Lone Star State…By 2017, demographers estimate that Texas’s population was 58 percent people of color and 42 percent whites. As demographics have continued to change, the Texas legislature has passed laws such as strict voter-photo-identification requirements that are likely to make it harder to mobilize people of color in the state…According to data obtained from the States of Change: Demographics and Democracyproject, people of color were 44 percent of the voting eligible population in 2008 in Texas, and the project estimates that that population is 50 percent in 2018. From 2012 to 2016, Hispanic turnout increased by 30 percent while the percent of Hispanic population grew 15 percent, meaning the increase in turnout outpaced the increase in population.”

Ed Kilgore notes an historic milestone in his article, “Nevada Becomes First State With Women-Majority Legislature” at New York Magazine: “A couple of postelection appointments to vacant positions in the Nevada State Assembly included one in which criminal defense lawyer Rochelle Thuy Nguyen succeeded Chris Brooks as a Democrat representing Clark County. That officially gave the state a historic landmark, as the New York Times noted: “[W]omen will hold 32 of 63 seats in the Nevada Legislature when the next session begins in February, about 51 percent. No state house in history had ever crossed the 50 percent mark….New Hampshire previously had majority women representation in the state Senate, but women were not the overall majority in the Capitol.” Kilgore also notes that, according to National Conference of State Legislatures, women’s share of state legislators will increase by about 3 percent in 2019. Further, “Democrats outnumber Republicans by a more than two-to-one margin (1,431 to 660) among the women who will be serving in state legislatures in 2019.”

At PowerPost, Joe Davidson reports on a sophisticated Russian effort to sway African American voters away from opposing Trump: “Documents released by the Senate Intelligence Committee, first reported by my colleagues Craig Timberg and Tony Romm, show in previously unknown detail a complex, high-tech, surreptitious strike on American democracy, targeting African Americans. Unlike the Republican sledgehammers used to suppress votes and thwart electorates’ decisions in various states, the Russians are sneaky, using social media come-ons that ostensibly had little to do with the 2016 vote…“Messaging to African Americans sought to divert their political energy away from established political institutions by preying on anger with structural inequalities faced by African Americans, including police violence, poverty, and disproportionate levels of incarceration,” said the report by the Computational Propaganda Research Project. “These campaigns pushed a message that the best way to advance the cause of the African American community was to boycott the election and focus on other issues instead. This often happened through the use of repetitive slogans.”

Congratulations to Sabato’s Crystal Ball and their election forecasters on the accuracy of their Midterm election predictions. As the editors note, not only did they come very close on the net number of pick-ups for U.S. Senate and House seats and Governorships; they also nailed specific races with impressive accuracy. They picked the winners in: 34 of 35 U.S. Senate races, 423 of 434 House races and 32 of 35 Governors races.