At Vox, Sarah Kliff and Dylan Scott provide an invaluabe guide to current health care reform proposals, “We read Democrats’ 8 plans for universal health care. Here’s how they work.” As Kliff and Scott write in their introduction to the various bills,

This year, dozens of Democratic candidates ran — and won — on a promise to fight to give all Americans access to government-run health care. A new Medicare-for-all Caucus in the House already has 77 members. All the likely 2020 Democratic nominees support the idea, too.

“Medicare-for-all” has become a rallying cry on the left, but the term doesn’t capture the full scope of options Democrats are considering to insure all (or at least a lot more) Americans. Case in point: There are half a dozen proposals in Congress that envision very different health care systems.

Scott and Kliff provide detailed summaries of each of the proposals. No doubt some of them will eventually be consolidated, reducing the number of bills under consideration. Unlike the GOP health care ‘reform’ plan, all of these bills protect individuals with prior health conditions from being denied coverage.

All would improve on the Affordable Care Act in significant ways, as Kliff and Scott note: “If you’re really sick and have high drug costs, it would be hard not to benefit from these bills,” says Karen Pollitz, a senior fellow at the Kaiser Family Foundation who recently co-authored a report comparing the different Democratic plans to expand public coverage.”

The article provides an excellent overview of major health care reform proposals, highly-reccomended for TDS readers. Here’s one of Vox’s comparison charts to encourage you to read on: 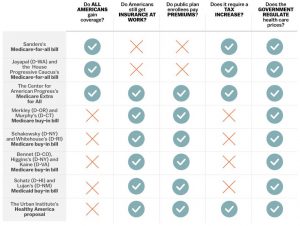 Although it is unlikely that the Republican-controlled Senate will pass any of these bills during the next two years, they set the stage for a vigorous — and informative — national debate on health care reform, leading up to the 2020 elections. This debate will help Democrats win popular support as the only political party with a credible vision for national health security.