In their New York Times article, “As Democrats Court Latinos, Indifference Is a Powerful Foe,” Jose A. Del Real and Jonathan Martin note that “A recent NBC-Wall Street Journal national survey showed a spike in interest in the election among Hispanic voters, but part of the challenge for Democrats is the sharp divisions among those voters. Latinos are not a monolith, and their political decisions are also shaped by age, region, and the immigration histories of their families. Exit polls after the 2016 election found that nearly 30 percent of Latino voters supported Mr. Trump, though some surveys put that figure closer to 20 percent…Hispanic voters could decide the half-dozen competitive House races in California, but their participation rate remains a big question mark. To win in those seats, the Democrats “ need more of those Latinos to turn out, the ones who are not frequent voters,” Ms. Merrill said…Nationally, 55 percent of Latinos said they have not yet been contacted by a political campaign this year, whether by email, mail, phone or in person, according to a recent survey by Latinos Decision, a polling firm.”

As for actions needed to mobilize Latino voters for Democrats, Eli Watkins reports at CNN Politics that “Los Angeles Democratic Mayor Eric Garcetti said the Democratic Party needs to take active steps to engage with Latino voters, including putting more Latino candidates on the ballot….”I think it’s really important to do two or three things,” Garcetti said Sunday on CNN’s “State of the Union, “speak to Latinos in the communities where they are, run more Latinos and invest in long-term, you know, political infrastructure in Latino communities.”

And at Daily Kos, Denise Oliver Velez urges progressives to “Stop the handwringing and conjecture about the ‘Latino vote,’ and support groups doing GOTV. Velez elaborates: “My question today is a simple one. If you are ‘concerned’ about voter turnout in these communities, what will you do to support the groups who are out there busting butt doing GOTV, and what support can you give to Democratic Latinx candidates who are currently running for office? (There are quite a few.)…Support doesn’t just mean money, either: you can also help get the word out.” Velez shares a tweet that gets right to the point: 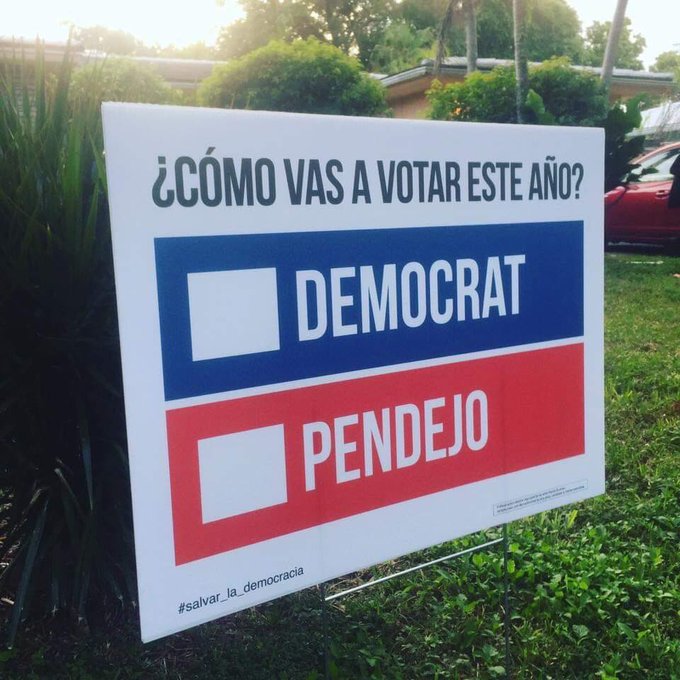 Focusing on “Suburban women, Trump fatigue and the House races that could make the difference” in Virginia, Marc Fisher and Jenna Portnoy observe atThe Washington Post: “If Democrats are going to wrest away the House and gain a foothold on power in the Trump era, an early Election Night indicator will come shortly after the polls close at 7 p.m. in Virginia, one of the battleground states with the most close races in the Eastern time zone…control of the House will be determined especially in purple places such as Virginia, where newcomers from other states and countries have boosted the economy and created surprising chances for Democrats…In Virginia, where Republicans hold a 7-4 advantage over Democrats in House seats, there are four real races, three in districts that Trump won handily two years ago and that Republicans have considered safe in recent cycles…Last year, Democrat Ralph Northam won the governor’s race by flipping suburban counties in some of the districts up for grabs next month.”

Ed Kilgore flags “11 Tight Governor’s Races Will Shape America’s Political Landscape” at New York Magazine, including CT, OR, ME, IA, FL, WI, NV, GA, OH, KS and SD and notes that “an unusually large number of gubernatorial barn burners may have a more immediate and practical effect on the 260 million or so Americans who live in the 36 states whose governorships are at stake on November 6.” Kilgore provides ratings for each race from Sabato’s Crystal Ball, Real Clear Politics and FiveThirtyEight and adds, “Indeed, according to the Cook Political Report, Democrats are favored to hold onto their own states and take back GOP governor’s offices in Illinois, Michigan and New Mexico. (Republicans are favored to oust Alaska’s independent Governor Bill Walker)…Cook has an amazing 11 gubernatorial (nine in states currently held by Republicans, two by Democrats) races rated as toss-ups…In an election cycle as wild as this one, a gubernatorial contest not among these 11 could be surprisingly close. And the implications for day-to-day governance — and for redistricting after the 2020 census — could be formidable.”

At CNN Politics ‘The Point,” Lauren Dezenski spotlights “9 midterms races with Electoral College implications” in states that are gaining and losing 1 or 2 seats in Electoral College representation. These races will also affect redistricting. They include: close governor’s races in Oregon, Florida, Ohio and Michigan; the Michigan State House, where Dems need just one pick-up to bust the GOP’s trifecta control of the state; and “key state senate race” in New York, Florida, Colorado and Minnesota.

Nate Silver has some good news for Democrats in his FiveThirtyEight post, “Democrats’ Unprecedented Fundraising Edge Is Scary For Republicans … And Our Model,” including: “It would be one thing if Democrats were raising money only in a few high-profile races — say, for example, in Rep. Beto O’Rourke’s Senate race in Texas. But that’s precisely not what is happening. Instead, the Democrats’ fundraising advantage is widespread. They’re raising money almost everywhere they need it in the House, whereas Republicans are sometimes coming up short…For instance, we project that by the time they file their 12G reports later this month — the last filings due before the election — 144 Democrats on November House ballots1 will have raised at least $1 million in individual contributions, not counting self-funding or outside money. But we project just 84 Republicans will have done the same. We also project that 73 Democratic House candidates will have raised at least $2 million, as compared to just 17 Republicans…The result is a fundraising disparity the likes of which we’ve never seen before — at least not in recent years.”

If ‘Say what you mean, and mean what you say’ means anything at all in Texas in 2018, the campaign of Democratic Senate candidate Beto O’Rourke should have some memorable ads up and running in the closing weeks of his campaign, especialy as Trump stumps for Cruz. At The Washington Post, Ashley Parker reminds readers that, during the GOP presidential primaries of 2016, Trump, “repeatedly mocked the senator from Texas as “Lyin’ Ted,” suggested his father played a role in the assassination of John F. Kennedy, and even made fun of the appearance of Cruz’s wife, Heidi…“I don’t get angry often, but you mess with my wife, you mess with my kids, that’ll do it every time,” Cruz told reporters at a campaign stop in March 2016, jabbing his finger angrily at the cameras. “Donald, you’re a sniveling coward, and leave Heidi the hell alone.” And “when the two were battling for the nomination…Trump called Cruz “a little bit of a maniac,” “a totally unstable individual,” and “the single biggest liar” he had ever encountered. Cruz countered by dubbing Trump “utterly amoral,” “a serial philanderer,” a “pathological liar” and “a braggadocious arrogant buffoon.”