Some findings from the Harvard University Kennedy School’s Institute of Politics Spring 2018 Youth Poll: Young Democrats are driving nearly all of the increase in enthusiasm; a majority (51%) report that they will “definitely” vote in November, which represents a 9-percentage point increase since November 2017 and is significantly larger than the 36 percent of Republicans who say the same. At this point in the 2014 election cycle, 28 percent of Democrats and 31 percent of Republicans indicated that they would “definitely” be voting. In the Spring of 2010, 35 percent of Democrats and 41 percent of Republicans held a similar interest in voting…Preference for Democratic control of Congress has grown between now and the time of the last IOP poll. In Fall 2017, there was a 32-point partisan gap among the most likely young voters, 65 percent preferring Democrats control Congress, with 33 percent favoring Republicans…Today, the gap has increased to 41 points, 69 percent supporting Democrats and 28 percent Republicans. “Millennials and post-Millennials are on the verge of transforming the culture of politics today and setting the tone for the future,” said John Della Volpe, Polling Director at Harvard Kennedy School’s Institute of Politics. “This generation of young Americans is as engaged as we have ever seen them in a midterm election cycle.

A recent Reuters/Ipsos poll indicates that Dems are gaining leverage from white senior voters. As Eric Levitz writes at New York Magazine, “Older, college-educated whites are among the most reliable voters in the nation. And in many of this fall’s most competitive districts, such voters account for nearly 10 percent of the population, according to Reuters’ analysis. Republicans were already at risk of losing the House due to shifts in turnout patterns, alone — but if those shifts are accompanied by significant defections among reliable GOP constituencies, the party could suffer historic losses up and down the ballot….“The real core for the Republicans is white, older white, and if they’re losing ground there, they’re going to have a tsunami,” political scientist Larry Sabato told Reuters. “If that continues to November, they’re toast.” 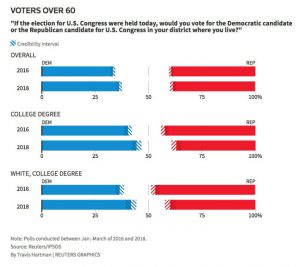 Writing in Social Europe, Ruy Teixeira presents “Five Theses For A New Left,” one of which bears special urgency for Democrats in the U.S.: “2. The left must unite. This is not an option, but a necessity. The rise of the disparate new constituencies in the left’s new coalition has accentuated the possibilities for division. This is particularly noticeable in Europe, where left strength is frequently diffused across several different parties (social democratic, left socialist, green, left social liberal, left populist, etc.) that regard each other with suspicion. The failure to present a common front is madness. The era when one tendency like the social democrats could completely dominate the left and didn’t need allies is over. The same applies to the Democrats in the United States; there is no way the Clinton supporters or Sanders supporters or minority-mobilization strategists or reach-out-to-the-white-working-class advocates can take over the party and succeed on their own. To beat the right, a fractured left must unite, bringing all progressives together in effective alliances.”

At Sabato’s Crystal Ball, Alan I. Abramowitz provides data analysis “Explaining Support for Trump in the White Working Class: Race vs. Economics,” and concludes, “Data from a Pew Research Center survey conducted during June and July of 2017 show that six months into Donald Trump’s presidency, the gap between whites with and without college degrees in opinions of the president was enormous. Non-college whites were far more likely to approve of Trump’s performance than white college graduates….However, this gap appears to have little or nothing to do with differences between the economic circumstances of these two groups. While whites without college degrees did experience far more economic distress than those with college degrees, economic distress itself appeared to have little relationship with opinions of Trump. Instead, the main explanation for the class divide in opinions of Trump among whites appeared to be differing views on race relations. White college graduates were much more likely than whites without college degrees to hold liberal views on the significance of racial discrimination in American society and opinions on the significance of racial discrimination were strongly related to opinions of Trump’s performance. Racial attitudes, not economics, appears to be the main factor producing strong support for Trump among members of the white working class.”

At The Atlantic, Ronald Browstein notes that Paul Ryan once worked for the late Rep. Jack Kemp, who was instrumental in passing the MLK holiday legislation, and “throughout his career” Ryan “presented himself as a disciple of Kemp,” who also had genuine friendships with many African American leaders. However, writes Brownstein, “after Trump took office, Ryan blinked at confronting the president’s appeals to white racial resentments,” and he “leaves the party lashed to a volatile, impulsive leader who is systematically stamping it as a vehicle for white racial resentment, even as the nation grows kaleidoscopically more diverse.” In the end, Ryan’s coldness towards disadvantaged Americans had less  in common with the warm-spirited Jack Kemp, than another of his reported idols, Ayn Rand.

E. J. Dionne, Jr. also notes Ryan’s “youthful fascination with the philosophy of Ayn Rand. She identified with society’s winners and regarded ordinary citizens as moochers and burdens on the creative and the entrepreneurial…Although Ryan gave warm speeches about compassion, his biggest fear was not that the poor might go without food or health care but, as he once said, that the “safety net” might “become a hammock that lulls able-bodied citizens into lives of complacency and dependency.”…He later backed away from Rand and acknowledged that the hammock was “the wrong analogy.” But his policies suggested that he never abandoned his core faith: If the wealthy did best when given positive incentives in the form of more money, the less fortunate needed to be prodded by less generous social policies into taking responsibility for their own fate.”

In The New York Times Sunday Review, Frank Bruni observed “Predominantly Republican and perversely gerrymandered, the Lone Star State is where Democrats send their dreams to die. Only 11 of its 36 House seats are in the party’s hands…But 2018 is shaping up as a year in which old rules are out the window and everything is up for grabs. Ryan’s planned retirement and the increasing disarray of the Republican Party illustrate that. So does Texas’ emergence as a credible wellspring of Democratic hope…Leave aside the Senate contest and Beto O’Rourke’s surprisingly muscular (if nonetheless improbable) bid to topple Ted Cruz. Several of the most truly competitive House races in the country are in Texas, which could wind up providing Democrats three or more of the 24 flipped seats that they need for control of the chamber.” Bruni spotlights several House races, which suggest that Democrats have some unusually-appealing candidates in Texas, in addition to all of the momentum that comes from the GOP’s lengthening string of embarrassments.

It appears that the president-in-waiting’s staff may not be quite ready for prime time. As John Wagner reports at PostPolitics, “As Vice President Pence prepared to head to Peru on Friday for the Summit of the Americas, his office advertised several events on his itinerary, including “a banquet hosted by President Pedro Pablo Kuczynski of Peru.”…One problem: Kuczynski resigned more than three weeks ago after becoming ensnared in a corruption scandal involving Latin America’s largest construction firm.” Wagner also notes a tasty typo in a recent Trump Administration statement, that “Air Force One became “Air Force Once” on the president’s public schedule.”