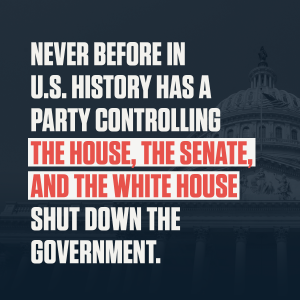 In his New York Times op-ed, “What the Shutdown Says About the Future of the Democrats,” Michael Tomasky comments on why Democrats are right to hold the line on a fair immigration policy: “For now, liberals should cheer this unreservedly. For one thing, the cause of these young undocumented Americans is a good one. But more broadly, the Republicans have been playing this way for years. If Democrats won’t, they’ll just lose. You can’t bring a squirt gun to the O.K. Corral.” It’s a good point. Dems have a lot to gain by standing up for a fair immigration policy, despite the GOP blame machine’s dubious efforts to spin the fault away from their own weak leadership. Not only does public opinion strongly support “the Democratic position that they be permitted to stay and given a path to citizenship,” as Tomasky points out; As FiveThirtyEight’s Harry Enten shows just below, a healthy majority places the blame for the shutdown at the feet of the Republicans.

At FiveThirtyEight, Harry Enten explores the political reverberations of shutdown blame: “… We don’t have divided government. During those previous shutdowns, Democrats controlled the White House and the GOP controlled Congress. But Republicans control everything right now. So maybe the public will pin even more of the blame on Republicans this time than in past shutdowns. An ABC News/Washington Post poll taken before the shutdown started found that 48 percent of Americans believe President Trump and congressional Republicans would be more to blame for a shutdown, while just 28 percent said congressional Democrats… A CNN poll, like the ABC News/Washington Post poll, found that most people would blame Trump or congressional Republicans for a shutdown…All that said, and even if there is quick shutdown effect in the polls, the midterm elections are not until November. With Trump in the White House, it’s difficult for any story to stay at the top of the news cycle for more than a few days. With that in mind, it’s easy to see one side picking up political support in the immediate aftermath of the shutdown, only for that bump to fade with time.”

“Faced with intra-party discord and malevolent prevarication from Republicans, what are Democrats to do about DACA?,” asks Mark Joseph Stern in his article, “Democrats Are Doing the Right Thing” at slate.com. “Rely on more easily broken promises from Ryan, McConnell, and the White House? Go along with the lie that Dreamers can wait until March for relief? Surrender altogether to the whims of a Republican Party dominated by serial fibbers? Of course not. The first DREAM Act was introduced in 2001. Republicans have foiled its passage for 17 years. At some point, Democrats had to draw a line in the sand. That moment arrived on Friday…A government shutdown is an awful thing. It’s a humiliation for the nation that disrupts hundreds of thousands of lives, and it may well provoke backlash against progressives. But Democrats had no other choice. Republicans cannot be trusted to protect Dreamers from a crisis of the GOP’s own making. To capitulate on DACA would be an abdication of the Democratic Party’s moral responsibilities. Dreamers belong in this country, and Democrats should use every bit of leverage they have to keep them here.”

Matthew Yglesias has a good summation of the current impasse on immigration reform and the shutdown at Vox: “Instead of negotiating positions, [immigration] hawks have put forth a comprehensive wish list for entirely transforming the American immigration system. They say they want billions of dollars in new border security funding plus the full RAISE Act vision of cutting legal immigration in halfwhile ending family and diversity visas in favor of an exclusive focus on job offers and educational attainment….There’s just no way Democrats are going to agree to these changes as the price to pay for helping the DREAMers. There’s a total disproportion between the scale of the asks and the significance of the DACA issue. To get sweeping changes in the immigration system enacted, conservatives would need to come to the table with some kind of help for the entirepopulation of long-settled undocumented immigrants — precisely the kind of comprehensive immigration reform they’ve been eschewing for years.”

As for ther price tag of government shutdowns, Danny Vinik writes at Politico, “Quantifying the exact cost to the government is difficult, in part because every shutdown is different. Between November 1995 and January 1996, the government shut down twice for a total of 27 days as Democrats and Republicans clashed over Medicare funding, among other issues. A subsequent analysis conducted by the White House’s Office of Management and Budget estimated that both shutdowns together cost the government $1.4 billion—more than $2 billion today after adjusting for inflation…Of that $1.4 billion, roughly $1.1 billion was salary paid to federal workers who stayed home and didn’t work. The remaining $300 million came from other sources, such as the lost revenue from the closure of national parks and public museums.”

Best quote of the day goes to Senate Minority Leader Chuck Schumer, as reported in Jennifer Rubin’s WaPo column “Shutdown agreement! Trump is to blame.” As Rubin writes, ” On the floor of the Senate on Saturday, Schumer sounded exasperated. He first reviewed the sequence of events. “The bottom line is simple: President Trump just can’t take yes for an answer. He’s rejected not one but two viable bipartisan deals, including one in which I put his most prominent campaign pledge on the table,” he said. “What’s even more frustrating than President Trump’s intransigence is the way he seems amenable to these compromises before completely switching positions and backing off. Negotiating with President Trump is like negotiating with Jell-O.”

At NBC News Politics First Read, Dante Chini writes, “There are 142 congressional districts that have Hispanic populations greater than the national average, about 18 percent, and 52 of those districts are currently held by Republicans. Among those 52 GOP-held districts, 18 are already rated as competitive by the Cook Political Report. (In 21 Republican-held House districts, the Hispanic population tops 30 percent.)…A Republican failure to fix DACA could drive up turnout among Hispanic and swing voters in those districts. Hispanic Americans already lean strongly against Republican control of Congress. This week’s NBC/WSJ poll found that 64 percent of Hispanics preferred the Democrats control the Congress, compared to 19 percent who favor Republican control…And the most important number of all in 2018 may be 24: the number of seats the Democrats would need to net in November to take back the House. If the Democrats are actually going to win that many seats this fall, these GOP-held districts with large Hispanic populations are an important target for them.”

“Who can devise—and pursue—wedge strategies to help Democrats broaden their coalition?…Not the party. It recognizes, correctly, that its full focus has to be on turning out its Base Vote. Midterm elections bring that into sharp relief; drop-off within the Democratic base is usually greater than the GOP’s…Nor can the party, even if it does much better than it’s done before, maximize its Base Vote by itself. Not only are its resources too few, but it has less credibility than entities on the independent side, both local and national….The Alabama special election proved the indispensability of independent efforts; it took every effort of the candidate, the party, and independent groups to produce the mammoth base vote turnout that propelled Doug Jones to the Senate…There is much to be learned from a granular examination of the suburban swing to Jones, identifying which suburban moderates swung and which did not…So little effort has been devoted to wedge strategies by Democrats that we have no hard evidence of what might work among—to cite a few possibilities—veterans, seniors, suburban moderates, small town/rural/exurban (STREX) voters, or evangelical Christians. Even the Latino realignment has been under-resourced; though resources have been made available for the issue fight around immigration and for civic engagement in election cycles, they have not produced a self-sustaining mass-membership organization, which could enroll millions.”– From Paul Booth’s “Building an Enduring Democratic Majority,” his final article for The American Prospect.