Eugene Scott explains why “Millennial voters could play a crucial role in Alabama Senate race” at The Fix: “In a recent Fox News poll, Jones leads Moore by eight points, in part on the strength of his advantages among voters 45 and younger. But activists on the ground say the Democratic candidate could do much more to target his outreach toward millennials…There’s been a swell of activity among young voters in Alabama since the election of President Trump. From the Women’s March in Birmingham to Human Rights Campaign volunteers working phone banks, the deep red state has seen liberals advocate for liberal policies. But activist Julia Juarez said if Jones reaps those benefits, it might be more because millennials dislike Moore than are enthusiastic about Jones. “The momentum of the #Resist marches and protests have morphed into an measurably more active bloc of voters in Birmingham, as noticed and enhanced by [Mayor] Randall Woodfin’s victory,” she told the Fix.” Scott quotes Woodfin, who adds “Millennials have a major role to play in this race…If millennials turn out to vote at higher than average numbers like they did in the mayoral race last month (5,000 voters between the ages of 18-35 turned out to vote in a municipal election for the first time), then they can be a deciding factor in this race…Millennials have the power to change the political dynamics here. If they turn out in high numbers, they will guarantee that Doug Jones will be the next senator from Alabama,” Woodfin added.

From Amy Walter’s “A Wave Is A Comin’” at The Cook Political Report: “My colleague David Wasserman has been digging into the question of just how big of a wave Democrats need to get in order to surf into the majority.  The short answer: they need to see a generic ballot advantage of +8 or more, which roughly translates to getting at least 54 percent or more of the national House vote in 2018…Democrats have a narrow path to 24 seats – even with a big wave or tailwind.  But, do not ignore what’s right in front of us. A wave is building. If I were a Republican running for Congress, I’d be taking that more seriously than ever.”

Democrats may be able to learn a little something from their U.K. brethren by reading Matt Walsh’s post “Understanding Labour’s ingenious campaign strategy on Facebook” at democraticaudit.com. One of Walsh’s observations: “…Going back to July 2016, the New Statesman’s Helen Lewis wrote of Jeremy Corbyn: “There is one place where he is unambiguously winning: Facebook”. She was right, and 2017 was unambiguously a Facebook election…The sheer number of people following Jeremy Corbyn or the Labour party’s Facebook posts meant that the party was able to achieve very high levels of organic reach. That’s important because, in the 2015 election, the winning Facebook strategy was targeting undecided voters in marginal constituencies. In 2017, it was a numbers game. The first indicator that the tectonic plates were shifting was the number of followers party leaders and party accounts were reaching…dramatic growth in Facebook likes for Jeremy Corbyn, up by more than 35%, and the Labour Party, up 71%, during the short campaign. This is despite a strong starting position at the beginning of the campaign. While there was growth for all the parties and leaders, it is notable that the performance of Labour and Corbyn considerably outstripped their rivals: the Conservatives, for example, rose 11%, and Theresa May gained less than 22%.” In addition, “The Labour party simply produced more content than its competitors, it posted more frequently and the content was more engaging. According to the content analytics company, News Whip, in the month leading up to the vote, the Labour page pulled in 2.56 million engagements on 450 posts, while the Conservative page saw 1.07 million interactions on 116 posts.” 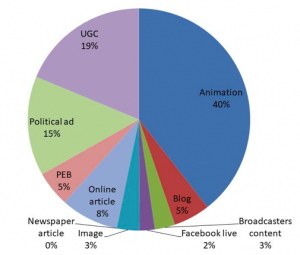 At The Upshot, Nate Cohn says “it’s not obvious that the building Democratic wave will be enough to flip control of the House,” and notes, “If you emphasized the special congressional election results, and believed that Democrats would only do about two points worse in races with incumbents (the difference in Virginia and New Jersey), the Democrats might be poised to pick up more than 40 seats. My view is that there haven’t been nearly enough of these contests to be confident that Democrats are on track for such significant gains, or to be sure that the incumbency bonus for Republicans is so small. But it is at least an argument for a larger Democratic gain than 27 seats if next year’s elections resemble this year’s contests.

In the wake of the big Democratic win in VA, Facing South’s Chris Kromm explores “Lessons from 2017: Can Democrats retake Southern legislatures?” Among Kromm’s observations: “In Virginia, where voters cast ballots for all 100 members of the House of Delegates, Democrats controlled only 34 seats heading into the 2017 elections. After Election Day, they had picked up 15 seats. Republicans currently cling to a 51-49 majority, although three of the races are still too close to call and will be decided by lawsuits and recounts. In Virginia House District 94, which includes Newport News, the GOP candidate is currently ahead by a mere 10 votes.”…If Democrats can run more candidates and build on changing demographics and anti-Trump sentiment to make gains in 2018, reformers hope this can at least generate enough competition that there will be momentum for reform as the post-2020 redistricting process nears.”

The next time some Republican starts blithering about family values, your response can quote from Nicholas Kristof’s NYT column, “Blue States Practice the Family Values Red States Preach,” which notes “Nine of the 10 states with the highest teen birthrates voted Republican in 2016. And nine of the 10 states with the lowest teen birthrates voted Democratic.“ Red regions of the country have higher teen pregnancy rates, more shotgun marriages and lower average ages at marriage and first birth,” Naomi Cahn and June Carbone wrote in their important 2010 book, “Red Families v. Blue Families.”…Divorce rates show a similar pattern: They tend to be higher in red states than in blue states, with Arkansas highest of all. “Individual religious conservatism is positively related to individual divorce risk,” according to a 50-state study reported in the American Journal of Sociology.”

Here we have a formidable contender for headline understatement of the month, “The Senate Republican tax bill does not look good for the working class at all” at quartz.com. Author Tim Fernholz notes one particularly brutal provision: “Removing the individual mandate means that fewer healthy people will sign up for insurance, so the Congressional Budget Office expects the cost of individual health insurance to rise by 10%. And people who don’t have insurance could still wind up paying out-of-pocket if they become ill, which can be ruinous.”