From “The Working Class Can’t Afford the American Dream” at howmuch.net: 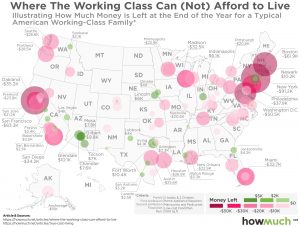 “This map tells us several things about the working class in America. Of the ten most populous cities in the country, the only place where you can enjoy a decent standard of living without taking on debt is San Antonio. Out of the top 50 largest cities, only 12 are considered affordable. Low-wage workers are better off in smaller cities…The geography of affordable cities is also remarkable. Newark, NJ, Chesapeake, VA and Jacksonville, FL are the only coastal locations where a worker can support his or her family. There are exactly zero affordable cities on the West Coast. Matter of fact, inexpensive locales tend to be far away from the coasts and can be found in the interior of the country. This is especially true in the southwest in states like Arizona and Texas.” ‘Best’ cities include: 1. Fort Worth, TX ($10,447); 2. Newark, NJ (($10,154); 3. Glendale, AZ ($10,120); 4. Gilbert, AZ ($9,760); and 5. Mesa, AZ ($7,780). You can probably guess the ‘worst’: 1. New York, NY (-$91,184); 2. San Francisco, CA (-$83,272); 3. Boston, MA (-$61,900); 4. Washington, DC (-$50,535) and 5. Philadelphia, PA (-$37,850). The chart should be helpful for targeting locations for minimum wage and union organizing campaigns, affordable housing, food co-ops and other projects.

Former Clinton and Obama staffer Ronald Klain’s “Here’s the most significant thing Democrats could do to help working families now” at The Washington Post, and notes: “There’s energy in the Democratic Party around big ideas, such as single-payer health care or a universal basic income. But the most significant thing Democrats could do to help working families right now isn’t designing a grand new program — it’s getting in the trenches to fight for a simple old idea. Specifically, trying to stop the Trump administration from denying millions of workers the overtime pay they have earned…Rather than siding with his voters, President Trump caved to major employers. Last month, his Labor Department announced that it was considering “stakeholder” — read: business — concerns that the new rule’s salary level was “too high.” Attention MAGA red-hat wearers: The president believes if you are making $600 a week, you may be making too much to deserve overtime. The Lord of the Apprentice Boardroom, the King of Mar-a-Lago, the Master of Trump Tower thinks you — making $15 an hour — may be paid too much to get overtime. He believes your boss should be able to make you come to work at dawn, stay far into the night, and not pay you one dime more for the extra hours worked…Democrats should try to attach amendments to legislation, updating the law…and putting the Obama rule into effect. They should talk about overtime whenever they can, and challenge Republicans on it in every corner carryout, gas station, work site and suburban mega-store.”

An optimistic take from syndicated columnist E. J. Dionne, Jr.: “Jared Bernstein and Ben Spielberg explained last week in an online commentary for The Post that the president is using his executive power to undercut regulations on workers’ pay, financial security and job safety, and also their right to form unions. Here again, Trump’s actions belie his words…Trump seems to think that if he goes after immigrants, picks fights about his border wall, regularly recites the words “law and order” and assails “political correctness,” workers won’t notice any of this. He’ll keep attacking academic and media elites to distract from his service to financial elites. And there is so much focus on the scandals genuinely worthy of public attention that the substance of Trump’s economic policies will be confined to the back pages of newspapers or the nether reaches of the Internet…Will it work? I’d insist that it’s always safe to wager that, over time, American workers judge politicians by looking at their paychecks, their working conditions and the economic prospects of their families. Trump will discover the limits of his flimflam…It was Reuther who said: “There’s a direct relationship between the ballot box and the bread box.” I still think he was right.”

There is some statistical good news in the most recent Gallup poll, conducted Aug 2-6, 2017: “In the U.S., 61% of adults say they approve of labor unions, the highest percentage since the 65% approval recorded in 2003. The current labor union approval is up five percentage points from last year and is 13 points above the all-time low found in 2009…Eighty-one percent of Democrats approve of unions this year — significantly higher than the 42% of Republicans who approve. This disparity is not as stark as it was in 2011 when Republican approval was 26% and Democratic approval was 78%. Democratic approval of unions has been fairly steady over time, while the approval levels of independents and Republicans have fluctuated…As more U.S. adults approve of unions, their interest in wanting unions to have more influence is also on the rise. Thirty-nine percent of Americans would like unions to have more influence — the highest figure recorded in the 18 years Gallup has asked this question. Consequently, those who want labor unions to have less influence is at a record low of 28%. Thirty percent want unions to have the same influence as today.”

“On Labor Day — designated a federal holiday in 1894 to honor America’s labor movement — at least eight Democratic candidates will hold rallies in five Midwest cities to tell workers just how far the country has veered from its pro-labor roots,” reports Kira Lerner at Think Progress. “Each candidate will center their campaigns on their support for a $15 minimum wage, progressive health care, and pro-union policies.” At least two labor leaders are running for state-wide office. “Cathy Glasson, a registered nurse and union leader in Iowa who will officially announce after Labor Day her campaign for governor in 2018, said that before this year, she had never considered running for elected office…In Milwaukee, Wisconsin, Mahlon Mitchell, the president of the Professional Fire Fighters Association of Wisconsin who announced his run for governor in July, will rally with workers at a hospital.”

Dollars & Sense Magazine is featuring a revealing interview with Labor journalist Chris Brooks and veteran union organizer Gene Bruskin about “Labor’s Southern Strategy.” At one point, Bruskin comments on the successful campaign to organize 5,000 workers at Smithfuled foods in Tarheel, NC: “The first time the UFCW tried to organize the plant in 1994, they thought they could just go through the normal NLRB procedures. The company just unloaded on them. During the second election in 1997, the company brought in the Sheriff’s office, they stood outside the plant with armed rifles when people walked into work. During the vote, the lights went out in the plant when people were casting ballots. They beat up organizers. It was a massive, unrestrained employer campaign. It wasn’t public though, because the union was keeping it quiet outside of the plant and the company was exerting total control inside of it…It took years before the National Labor Relations Board (NLRB) and the courts weighed in. It also took years before the union decided to engage in a big public campaign outside the plant to counter the company’s inside campaign. We put a lot of time, energy and resources into telling the story of the workers, not just in the plant. but also in an aggressive media campaign, also in the churches all around the state and in public places all along the East and Midwest, using key allies like Jobs with Justice. These stories put the company on the defensive. By making the oppression that workers faced in the plant synonymous with the Smithfield brand, we created a wall of public pressure to guard workers against the company’s attacks. I think we successfully exposed Smithfield’s actions in a way that hurt their brand, in a way that the UAW hasn’t seemed to be able to do to Nissan or Volkswagen.”

In The New York Times, William E. Forbath, professor of law and history at the University of Texas and Brishen Rogers, a Temple University law professor,  urge “A New Type of Labor Law for a New Type of Worker” and they argue that Democratic lawmakers should be “putting labor-law reform at the top of their agenda.” Further, “A few simple but bold legal reforms would make a world of difference. First, Congress could pass laws to promote multi-employer bargaining, or even bargaining among all companies in an industry. If all hotel brands, all fast-food brands, all grocers or all local delivery companies bargained together, none would be placed at a competitive disadvantage as a result of unionization, which is often the main reason employers resist it so fiercely. Second, Congress could ensure that organized workers can bargain with the companies that actually profit from their work by expanding the legal definition of employment to cover more categories of workers…Organized and united under new labor laws that they had a hand in achieving, retail, hospitality, health care and other service workers could become a solid, multiracial working-class base for a progressive Democratic Party.”