Despite the problematic political landscape facing Democrats, the party does have a potent resource, 21 state attorneys general, many of whom are tough advocates of progressive values and reforms, and they are ready to rumble. As Alan Greenblatt writes in his post, “To Battle Trump, Democrats Will Use GOP’s Own Tactics” at Governing the States and Localities:

“Democratic attorneys general are going to be very active, suing a number of regulatory agencies,” says Paul Nolette, a political scientist at Marquette University. “They will be prepared to use a kitchen sink strategy against everything coming out of the EPA.”

…Democrats are preparing to fight the new administration with lawsuit after lawsuit. But can Democratic AGs make a difference with their diminished numbers?……The number of Democratic attorneys general has ticked down with recent Republican successes at the state level. But there are still 21 of them — more than the number of Democratic governors or legislatures. Many are already accustomed to working closely on litigation with liberal groups such as the Sierra Club.

As you can see from the wikipedia map below, many of the Republican A.G.s are in smaller population states. 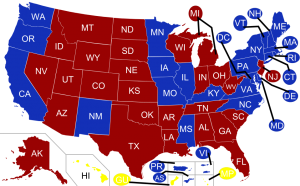 And, as Greenblatt notes,”it isn’t really the number of Democratic AGs that matters. A single activist attorney general such as Eric Schneiderman of New York or Xavier Becerra of California can command a small army of lawyers.”

Republicans will surely whine and howl about the Demcoratic state A.G.s doing their job. But they are on very shaky ground expressing any moral outrage about it. As Greenblatt notes,

In his book Federalism on Trial, Nolette found that recent Republican AGs such as Pruitt were far more likely to file lawsuits than earlier generations of attorneys general. By his count, Republican AGs filed a total of five partisan briefs with the Supreme Court during the Clinton administration, compared with 97 during the first seven years of the Obama presidency. Now that the partisan shoe is on the other foot, Democrats will try their best to block much of what they don’t like coming out of the new Washington.

When fighting the administration on labor, immigration and health, Democrats are likely to borrow from the GOP playbook in seeking to block new federal rules through every step of the process. In addition, they’ll try to do something Republicans generally won’t — use their leverage to win multistate court settlements that increase regulation of targeted industries. They could be especially active in areas where Republicans in Washington might be inclined to let corporations off the hook, such as banking and securities.

President-elect Donald Trump is also uniquely-positioned to draw a barrage of legal chalenges from state A.G.s. As Greenblatt explains,

“I won’t hesitate to take Donald Trump to court if he carries out his unconstitutional campaign promises,” Massachusetts AG Maura Healey pledged in a fundraising pitch last year.

…Trump doesn’t come to office with a clean slate when it comes to relations with attorneys general. Schneiderman helped negotiate a $25 million settlement immediately after the election regarding allegations of fraud involving Trump University. He’s still looking into the question of whether Trump’s foundation violated New York law, notably with a $25,000 campaign donation to Florida AG Pam Bondi.

“Donald Trump, citizen, not Donald Trump, president, enters the world of AGs on a watch list,” says James Tierney, a former Maine attorney general who now teaches at Harvard University. “He ran a routine, garden-variety fraud — Trump University — and he was caught. Every attorney general I’ve talked to has had complainants in his state. Everybody opened files. When somebody’s a fraudster, they get on everybody’s agenda. It changes the way you look at him or her.”

Republicans will soon have control of the three branches of government and a healthy majority of the state legislatures and governorships. But, Democratic state attorneys general have a full agenda of their own, and they are set to leverage their authority to keep the Trump administration in check.