If anyone still harbored hopes that Trump would be a bipartisan maverick, his extremist cabinet picks thus far indicate that we can now let go of any remaining delusions in that regard, or that he gives a damn about unifying Americans. With the nomination of Scott Pruitt to head the E.P.A., it sure looks like Steve Bannon is now the puppet-master pulling Trump’s strings, and Jared Kushner’s role has been reduced to technical support. The nomination of big oil errand boy Pruitt has a nasty, in-your-face quality that points to the hissing ideologues in Trump’s den, including Bannon and Sessions.

I wouldn’t be surprised if it turns out the Romney at State buzz was just a distraction to provide temporary cover for the hard right cabinet set-up, not too dissimilar from the way they just played Al Gore. Alternatively, Romney might serve as a suitably obedient parrot to distract from the rest of Trump’s cabinet picks. If so, that could come soon, to quell rising protest against Pruitt.

And if this keeps up, the comings and goings at the White House could look like outtakes from “Seven Days in May.”

Classy, that “pro” wrestling should serve as an exemplary business in the Trump Administration.

The chart below comes from “Which was the most accurate national poll in the 2016 presidential election?” by John Sides at The Monkey Cage: 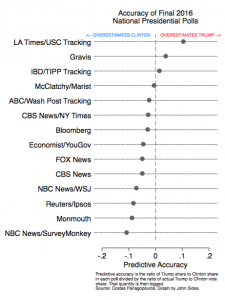 From Thomas E. Patterson’s report, “News Coverage of the 2016 General Election: How the Press Failed the Voters” at the Harvard Kennedy School of Government Shorenstein Center on Media, Politics and Public Policy, via Erik Wemple’s “Study: Clinton-Trump coverage was a feast of false equivalency” at The Washington Post: “Clinton’s controversies got more attention than Trump’s (19 percent versus 15 percent) and were more focused. Trump wallowed in a cascade of separate controversies. Clinton’s badgering had a laser-like focus. She was alleged to be scandal-prone. Clinton’s alleged scandals accounted for 16 percent of her coverage—four times the amount of press attention paid to Trump’s treatment of women and sixteen times the amount of news coverage given to Clinton’s most heavily covered policy position…There wasn’t much in Clinton’s general election news coverage that worked in her favor….Stories about her personal traits portrayed her as overly cautious and guarded and ran 3-to-1 negative. News reports on her policy positions trended negative by a ratio of 4-to-1. Everything from her position on health care to her position on trade was criticized, often in the form of an attack by Trump or another opponent. Her record of public service, which conceivably should have been a source of positive press, turned out differently. News reports on that topic were 62 percent negative to 38 percent positive, with Trump having a larger voice than she did in defining the meaning of her career. He was widely quoted as saying, “She’s been there 30 years and has nothing to show for it.”

Talk about irony, “According to exit polls, Trump received 81 percent of the white evangelical Christian vote, and Hillary Clinton only 16 percent. Trump did significantly better than the overtly religious Mitt Romney and the overtly evangelical George W. Bush. He likely over-performed among other theologically conservative voters, such as traditionalist Catholics, as well. Not bad for a thrice-married adulterer of no discernible faith…To what can we attribute Trump’s success? The most logical answer is that religious traditionalists felt that their religious liberty was under assault from liberals, and they therefore had to hold their noses and vote for Trump.” — As  reported by David Bernstein at The Volokh Conspiracy.

At The Fix Aaron Blake rolls out the reasons why gimmicky ploys to place Merrick Garland on the U.S. Supreme Court just before the new Congress is sworn in are Not Gonna Happen. In addition, it’s hard to imagine a staid, respected jurist like Garland offering himself up as the guinea pig for such an unprecedented gambit, and it’s also out of character for President Obama. If there was a workable, though controversial, way to place Garland on the court, it would be morally justifiable, since the Republicans have shamelessly betrayed America’s ideals by refusing to even hold hearings on Obama’s nominee. Unfortunately, the schemes Blake describes have too many moving parts, and could backfire badly.

Bring it, please bring it.