For your response, the next time some Trump defender charcterizes the Republican nominee as some sort of champion of working people: “…Trump often portrays himself as a savior of the working class who will “protect your job.” But a USA TODAY NETWORK analysis found he has been involved in more than 3,500 lawsuits over the past three decades — and a large number of those involve ordinary Americans…who say Trump or his companies have refused to pay them…Trump’s companies have also been cited for 24 violations of the Fair Labor Standards Act since 2005 for failing to pay overtime or minimum wage, according to U.S. Department of Labor data. That includes 21 citations against the defunct Trump Plaza in Atlantic City and three against the also out-of-business Trump Mortgage LLC in New York. Both cases were resolved by the companies agreeing to pay back wages…n addition to the lawsuits, the review found more than 200 mechanic’s liens — filed by contractors and employees against Trump, his companies or his properties claiming they were owed money for their work — since the 1980s. The liens range from a $75,000 claim by a Plainview, N.Y., air conditioning and heating company to a $1 million claim from the president of a New York City real estate banking firm. On just one project, Trump’s Taj Mahal casino in Atlantic City, records released by the New Jersey Casino Control Commission in 1990 show that at least 253 subcontractors weren’t paid in full or on time, including workers who installed walls, chandeliers and plumbing.” — from USA TODAY exclusive: Hundreds allege Donald Trump doesn’t pay his bills.

It’s not enough to sell our candidates to the public. We must also work on improving the party’s image. If Dems won’t define the party, Republicans will. This is an OK start, but Democrats need a continuous series of ads that define what the party has accomplished and what it means to be a Democrat.

More required reading for Democrats: “Here’s how to fight Trump’s ballot bullies” by WaPo columnist Colbert King, who writes, “Trump has called for his supporters to stand watch at polling places in “certain areas,” a tactic that could be aimed at intimidating and suppressing the votes of African Americans and other minorities…“And when I say ‘watch,’ you know what I’m talking about,” Trump said at an Ohio rally in August. “Right? You know what I’m talking about.”…Expect Trump’s vigilantes to hover at the polling places of people who don’t look like them. They will be taking a page from their forebears, who used poll taxes, literacy tests and violence to challenge and suppress the black vote…Trump and his posse make GOTV all the more urgent…National civil rights groups, led by the Lawyers’ Committee for Civil Rights Under Law, intend to come out in force nationwide with volunteers trained to serve as a first line of defense against the intimidators…Pastors have to take to their pulpits and preach on exercising this basic right. Closer to home, the influential Metropolitan AME Church is spearheading “Ready, Set, Vote” to stir up voters, especially millennials, to go to the polls…National organizations such as the Links Inc., a group of nearly 14,000 professional women of color in 41 states and the District, are devoting the month to mobilizing voters.”

In their Washington Post article, “Buoyed by rising polls, Clinton shifts to a new target: the House and Senate,” Philip Rucker, Ed O’Keefe and Mike Debonis write “Hillary Clinton is pouring $1 million into Indiana and Missouri in the campaign’s final weeks — not because the Democratic presidential nominee thinks she can carry those reliably Republican states, but because she believes that, with an extra push, Democrats can win the Senate and governors’ races there…In Michigan, the Clinton campaign is propelling a late surge by Democratic state legislative candidates to regain their House majority. In parts of Maine, Nebraska, Virginia and other states, Clinton volunteers are touting Democratic congressional candidates in their phone calls and fliers to voters. And as Clinton rallied supporters across Pennsylvania on Saturday with running mate Tim Kaine, she touted Senate hopeful Katie McGinty and attacked her GOP opponent, Sen. Patrick J. Toomey, as beholden to presidential nominee Donald Trump…“As we’re traveling in these last 17 days, we’re going to be emphasizing the importance of electing Democrats down the ballot,” Clinton told reporters Saturday night.”

Politico’s Scott Bland illuminates Democratic funding strategy to win a House majority, and observes: “To date, more than a dozen Democratic challengers are benefiting from such “hybrid” advertising, getting extra hundreds of thousands of dollars apiece from the Democratic Congressional Campaign Committee. The technique has been a small but consistent part of Democratic strategy in recent years, but new legal guidance has also allowed Democrats to share costs on ads linking their opponents to Trump on policy…“You have a historically unpopular Republican presidential nominee, which increases the appeal of doing this sort of thing,” said a Democratic operative. “If you can find a way now that you only have to pay 50 percent of an ad, and link your opponent to Trump, and that makes strategic sense in the district, that’s a no-brainer.”..The cost-sharing has turned into a critical tool for the DCCC, as it suddenly tries to compete in more districts and support little-known challengers made unexpectedly viable by Trump’s late slide.”

Less than three weeks from the election, there is a stat tie for the presidential race in GA, with Trump at 44, Clinton at 42 and Gary Johnson at 9, according the the Atlanta Journal Constitution poll released October 21st.

“…New analytical tools by physicists at The City College of New York promise a quicker and remarkably accurate method of predicting election trends with Twitter….Hern´an A. Makse, Alexandre Bovet and Flaviano Morone have developed analytic tools combining statistical physics of complex networks, percolation theory, natural language processing and machine learning classification to infer the opinion of Twitter users regarding the Presidential candidates this year…”Our analytics, which are available at kcorelab.com, unleash the power of Twitter to predict social opinion trends from elections, brands to political movements. Our results suggest that the multi-billion public opinion polling industry could be replaced by Twitter analytics performed practically for free,” concluded Makse.” reports phys.org in the post, “Physicists develop analytics to predict poll trends.”

In his FiveThirtyEight election update, Nate Silver explains why “Trump May Depress Republican Turnout, Spelling Disaster For The GOP.” As Silver notes, “The nightmare scenario for the GOP is that high-information Republican voters, seeing Trump imploding and not necessarily having been happy with him as their nominee in the first place, feel free to cast a protest vote at the top of the ticket. Meanwhile, lower-information Republican voters don’t turn out at all, given that Trump’s rigging rhetoric could suppress their vote and that Republicans don’t have the field operation to pull them back in. That’s how you could get a Clinton landslide like the one the ABC News poll describes, along with a Democratic Senate and possibly even — although it’s a reach — a Democratic House.”

These maps from FiveThirtyEight raise a lot of interesting questions: 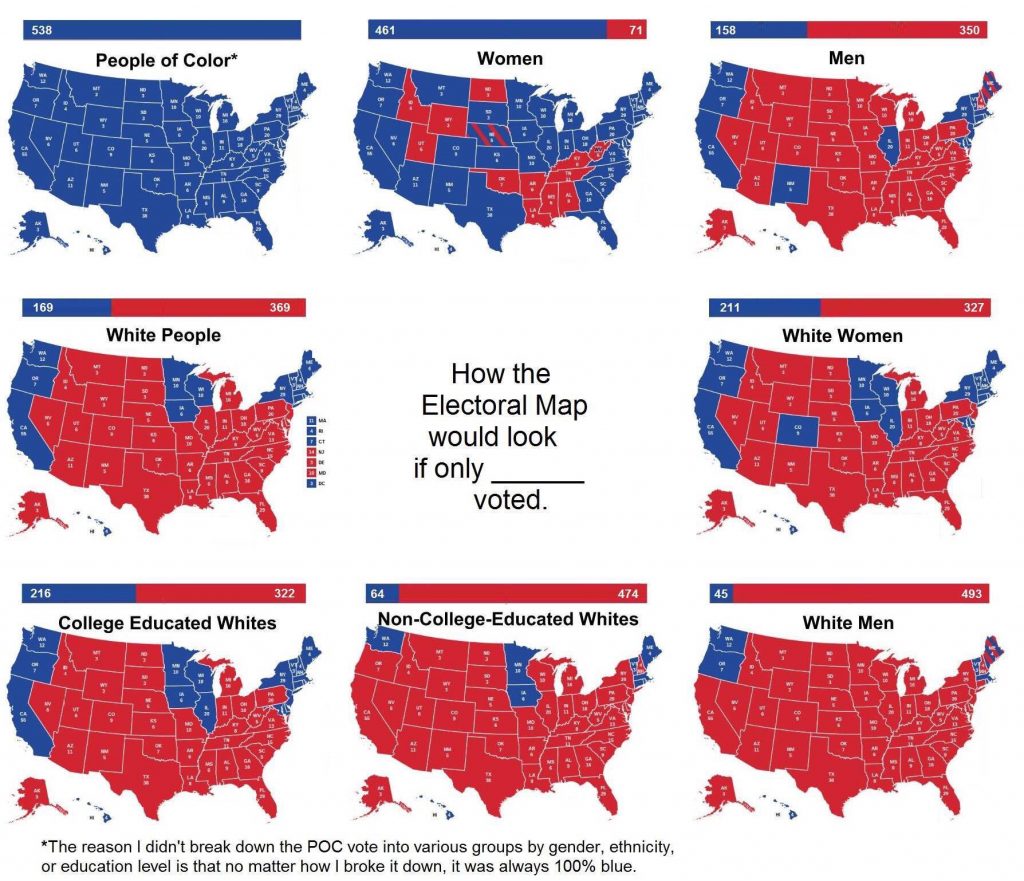