In his Wall St. Journal op-ed, Ruy Teixeira explains “Why the Democrats Have Turned Left.” In addition to the demographic transformation that is profoundly changing American politics, public skepticism is growing about our economic system’s failure to deliver economic progress. Teixeira adds, “Mrs. Clinton has repeatedly said that during her first 100 days she would call upon Congress to dramatically increase spending on roads, bridges and other public works, including to provide universal broadband and build a clean energy grid. Her $275 billion program, if implemented, would represent the greatest investment in American infrastructure since the development of the interstate highway system in the 1950s.”

Ed Kilgore observes in his New York Magazine post, “Trump No Longer Kicking Ass With the White Working Class,”: “As the New York Times’ Nate Cohn noted on July 25, Trump was winning white working-class voters at a better than a two-to-one clip in some surveys (66-29 in a July CNN poll, 65-29 in a July ABC/Washington Post poll) …That could be changing. A new NBC/Wall Street Journal survey showed his lead among non-college-educated white voters drooping to 49-36. Similarly, McClatchy/Marist pegs it at 46-31. These are not world-beating numbers. And you have to wonder: If Trump is losing his special appeal to the voting category that has long been his campaign’s signature “base,” where is he supposed to make that up?”

A downer convention of historic proportions for the GOP: “Gallup has been tracking the response from voters to conventions since 1984, and the Republican National Convention of 2016 was the first for which more people said it made them less likely to back the candidate.” – from Philip Bump’s post “The new Post-ABC poll shows just how badly Donald Trump blew his convention” at The Fix. 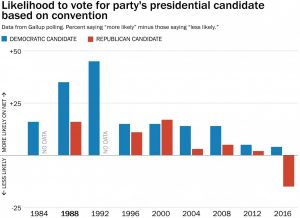 The legality of a major Illinois voter suppression law is on deck, reports Rich Miller at Crain’s Chicago Business.

Adam Eichen and Bob Vallier report at billmoyers.com, via salon.com: “The approximately 8 million American expats make up a voting bloc nearly double that of Washington state, the 13th most populous state in the nation. Were they to constitute a state, they would have about 14 electoral votes. Americans abroad are students and retirees, military and diplomatic personnel, people on short- and long-term job assignments, Americans with foreign spouses and their children…This year, DA’s[Democrats Abroad’s] global primary had record turnout. The 34,570 voters who cast ballots exceeded the number of Democrats who showed up for state party presidential caucuses this year in Nebraska, Idaho, Alaska, Hawaii and Wyoming, according to votes compiled by University of Florida turnout expert Michael McDonald’s United States Election Project...Expat votes often make the critical difference in close contests across the country…Just ask Sens. Al Franken (D-MN) and Jon Tester (D-MT) — both of whom were elected by slim margins in 2008 and 2012, respectively. The number of votes they received from abroad exceeded their margins of victory in their first Senate races.”

From Bill Weissert’s AP report, “Divided America: Texas Hispanic Voting Bloc Largely Untapped“: “Texas is home to 10.2 million Hispanics, 19 percent of the country’s Latino population. Excluding noncitizens and those under 18, about 5 million Texas Hispanics will be eligible to vote in the 2016 presidential election, but less than half may register and fewer still are likely to cast ballots…No Democrat has won statewide office here since 1994, the country’s longest political losing streak…A 2014 Gallup poll found that Texas Hispanics prefer Democrats to Republicans by a 19 percentage-point margin. Nationwide, Democrats enjoy a more comfortable 30 percentage-point advantage.”

ACORN founder Wade Rathke has a messaging suggestion that taps the positive “invest in America” flip side of whatever traction Trump gets with the working-class as a result of his anti-trade posture: “T-shirts saying “Build Infrastructure, Vote Hillary” may not seem like a catchy slogan, but it might wrong foot the Republicans and catch them in the bind of their own base, including the angry and entitled white voters, who want to see this kind of economic interference that delivers growth and visible progress.” Might make a good fall campaign slogan and bumper sticker as well.