In the wake of Trump’s meltdown in the polls, buzz is building across the trad media, as well as the internets, that Trump may bail. The argument boils down to ‘Trump will quit because his ego is too big to cope with a huge rout’ vs. ‘Trump won’t quit because his ego is too big.’  At Politico Steven Shepard posts on an “insider poll” of GOP activists in 11 swing states, which found that “70 percent, said they want Trump to drop out of the race and be replaced by another Republican candidate — with many citing Trump’s drag on Republicans in down-ballot races. But those insiders still think it’s a long-shot Trump would actually end his campaign and be replaced by another GOP candidate.”

But Michael Tomasky warns that “It’s Too Early for Liberals to Gloat About Trump” at The Daily Beast, and observes “It’s a good week to gloat if you’re a liberal, but gloat weeks are exactly the weeks that make me a little nervous.” Tomasky advises, “that that’s how to beat Trump: get under his skin. Tick him off. Unnerve him. Bait him, goad him, see what he’ll say…He has grudges and resentments and a constant need to be seen as dominating…feed his grudges in the hope that he’ll say something offensive”

NYT columnist Paul Krugman warns of the perils of the Clinton campaign tilting too far to the right to accommodate Republican refugees:”There’s absolutely no evidence that tax cuts for the rich and radical deregulation, which is what right-wingers mean when they talk about pro-growth policies, actually work, or that strengthening the social safety net does any harm…Trumpism is basically a creation of the modern conservative movement, which used coded appeals to prejudice to make political gains, then found itself unable to rein in a candidate who skipped the coding…If some conservatives find this too much and bolt the party, good for them, and they should be welcomed into the coalition of the sane. But they can’t expect policy concessions in return. When Dr. Frankenstein finally realizes that he has created a monster, he doesn’t get a reward. Mrs. Clinton and her party should stay the course.”

Well, this is disappointing — when the largest organization representing senior citizens makes deals with an organization which develops state-level legislation that screws consumers and suppresses voting.

At ThinkProgress Bryce Covert spotlights “The States That Do Nothing To Help Working Parents” according to a new report from the National Partnership for Women & Families. The 12 states that earned an “F” grade are depicted in black. 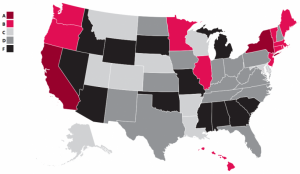 At The New York Times Leah Wright Regueur, author of “The Loneliness of the Black Republican: Pragmatic Politics and the Pursuit of Power,” drills down on the question, “Why Can’t the GOP Get Real with Black Voters?,” and notes of the Republican convention “Of the 2,472 delegates, only 18 were black. It is the lowest percentage on record, lower even than 1964, the year the party selected Barry Goldwater as its presidential nominee.”

“Clinton showed up in small factories in places the new American economy has all but forgotten: Johnstown, Pa.; Pittsburgh; Youngstown, Ohio; places where a guy straight out of high school used to be able to support his wife with a mining or manufacturing job and even give his kids a shot to move up in the world. And these white voters have even been the focus in the diverse swing states of Colorado and Nevada, where Clinton has been fundraising and making public appearances late this week.” – from Kasie  Hunt’s “Hillary Clinton Looks to Win Over White Working-Class Male Voters” at nbc.com.

Libertarian presidential candidate Gary Johnson, who will be on the ballot in every state, jockeys for a place in the upcomming debates. “The eligibility requirements, set by the nonpartisan Commission on Presidential Debates, state that a candidate has to hit 15 percent in five national surveys a few weeks before the debate to earn a place on the stage,” according to Josh Katz at The Upshot.

And yet another opportunity squandered?