Dave Weigel’s post at The Fix “Democrats have a bad habit of giving away Senate seats” should be required reading and thoroughly discussed by strategists in the Clinton campaign, as well as the DNC.

Sen. Sanders is calling on Clinton delgates to the Democratic convention to clarify their opposition to a vote on the Trans-Pacific Partnership in the lame duck session of congress. Michael Edison Hayden reports at ABC News that “The Clinton campaign responded to ABC News’ request for comment by forwarding a recent statement the candidate made on TPP in response to criticisms from the Trump campaign: “Hillary Clinton opposes TPP today, she will oppose it in November, and she would not move it forward in January. Hillary Clinton has made clear that she is not interested in tinkering around the margins with TPP. As she has said repeatedly, she believes we need a new approach to trade that protects American jobs, raises incomes for American workers, and strengthens our national security.”

“The crown jewel of Obama’s machine, an email list of supporters that included 20 million addresses in 2012, is now fully available to Clinton. That list had been closely held within an Obama campaign committee that still exists to pay off old debt. Democratic groups and even Obama’s Organizing for Action nonprofit had to rent the list for a hefty sum…Now a copy of that list, which helped propel Obama to record-breaking fundraising, is controlled by the Democratic National Committee, which can send emails at will without going through Obama’s campaign…” — from Josh Lederman of the A.P.

Those who would like a little more political wonk with their morning coffee should try Sam Wang’s “The Presidential Meta-Analysis for 2016” at The Princeton Election Consortium. After analysing all of the data, Wang sees only one state, NC, in the toss-up category. Here’s one of his nifty graphics: 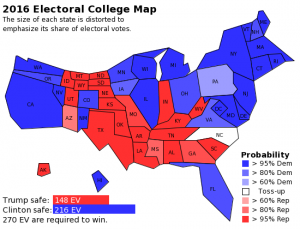 Nate Silver’s fivethirtyeight.com is also providing data-driven updates in their feature, “Who will win the presidency?”

Economist Neil H. Buchanan makes a case at Newsweek that “Republicans Should Embrace a Hillary Clinton Presidency” and notes, “They will significantly increase their chances of winning in the future if they are seen as the party that is big enough to put partisanship aside in the best interests of the country…The entire political conversation would change from, “Wow, the Republicans are literally willing to do anything to win,” to an outpouring of plaudits for Republicans’ genuine patriotism.”

At The American Prospect Joshua Holland explains why it is unlikely that Hillary Clointon will move toward the political center to get elected. “..Democrats have won the popular vote in five of the last six elections, and in the past two they did it with what’s been called the “Rising American Electorate”—African Americans, Latinos, urban and suburban college-educated whites, and unmarried women. According to [Stan] Greenberg, those groups constituted 51 percent of voters in 2012, and he estimates that they’ll represent 53 percent of voters this year. But he also thinks that secular voters should be considered part of that new majority. Their inclusion, he says, expands the universe of voters who lean toward Democrats—and who are not moved by conservative messaging—to more like 64 percent of the electorate…“If they are consolidated and voting in large numbers, then that gives you a huge election,” says Greenberg. “For me, step one is to consolidate those voters and energize those voters, and if you look at the margin right now, many of the Sanders voters and many of the millennial voters have not yet consolidated. So [Clinton] has gains to be made by energizing that broad progressive base.”

Allie Yee crunches some numbers at Facing South and explains why “With deportation relief at stake, South’s Latinos could swing presidential race”

At Vox Caleb Lewis reports that “2 weeks out, and Trump’s convention is a total mess. Sad!” But at least it may not be as boring as the last couple of GOP quadrennial conventions, with all of the loons expected to participate.