The chart below is from David Byler’s excellent article in the Post going over the best available data on Hispanic voting behavior in the 2020 election. 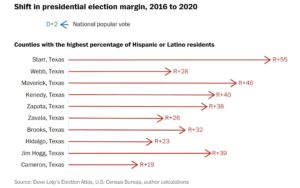 It’s not a pretty picture for the Democrats and Byler provides a valuable service by putting the most relevant data all in one place. I’ve looked at a lot of these data myself and I think Byler gets the story basically right.

“For years, high-ranking Republicans believed that Democrats had them backed into a demographic corner: The Latino electorate would continue to grow, providing Democrats with more votes and permanently squeezing Republicans out of power.

Donald Trump has, for the moment, proved that theory wrong. Overall, Trump won 38 percent of the Hispanic vote in 2020. That’s better than John McCain or Mitt Romney did against their Democratic opponents in 2008 and 2012, respectively, and a big improvement over his 2016 showing…..

[W]ho are Trump’s Latino supporters? And how did he gain so much ground?

A good way to understand Trump’s Latino support is to break his voters into three groups: loyal GOP voters, Democratic converts and new voters who broke for Trump. Each group came to support Trump at different times and for different reasons…..

Trump didn’t just hold onto traditional Latino Republicans: He converted many who voted for Democrats in 2016 or 2018.

He ate into Democratic margins among non-college-educated Hispanics, creating a new battleground in the electorate. More than 80 percent of Hispanics do not have a college degree — a huge pool of potential votes for both parties.

As the 2020 race reached its peak — and Republicans projected an anti-communist, anti-crime, pro-growth message to Latinos — Trump gained ground, especially among moderate and conservative Latinos…..

Trump won new converts with smart politics. He emphasized his economic record, soft-pedaled his immigration positions and focused on issues such as crime, where he could bring Latino Democrats into the fold….

Nobody knows which direction Latinos will take. But the 2020 election proved that many Latino voters are up for grabs — and that Republicans are far from extinct.”

Read the whole thing which includes a lot of very good charts and maps.