The following article by Ruy Teixeira, author of The Optimistic Leftist and other works of political analysis, is cross-posted from The Liberal Patriot:

Things look a little brighter today than just 2 days ago! I will discuss two items in this post: (1) How did the Democrats pull off their twin victories in Georgia?; and (2) What does this mean for how the Democrats can/should move forward?

To the first item. To the extent we can rely on available data, the differences are striking between how the Democrats put together their Senate victories yesterday vs. Biden’s win in the state last November. In Biden’s victory, despite the conventional narrative, it was apparent that his win was actually not attributable to exceptional performance among black voters. Nate Cohn and colleagues observed, based on precinct-level analysis of the Georgia Presidential vote:

“Joe Biden put Georgia in the Democratic column for the first time since 1992 by making huge gains among affluent, college-educated and older voters in the suburbs around Atlanta, according to an Upshot analysis of the results by precinct. The Black share of the electorate fell to its lowest level since 2006, based on an Upshot analysis of newly published turnout data from the Georgia secretary of state. In an election marked by a big rise in turnout, Black turnout increased, too, but less than that of some other groups.”

But they presciently added:

“[T]he relatively low Black share of the electorate could mean that Democrats have the potential for a better showing, perhaps even in the two Senate runoffs in January.”

And that does indeed appear to be what happened. Nate Cohn provides these data about yesterday’s [Tuesday’s] runoffs: 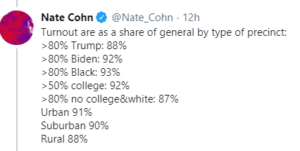 That assessment is supported by data from AP/NORC VoteCast, a survey source generally considered superior to the exit polls. The VoteCast data show blacks at 29 percent of Georgia voters last November but 32 percent yesterday. Conversely, white voter share declined from 63 to 60 percent. White noncollege voter share declined more, from 36 to 34 percent, but white college share also declined from 27 to 26 percent.

VoteCast data also allow us to compare voter preference across the two elections, which also reveals interesting differences. Biden carried black voters by 92-6 but Ossoff did even better at 94-6 (I will use Ossoff as the point of comparison since this was the closer race). But Biden did better among white voters, particularly white college voters. He had just a 22 point deficit among these voters, significantly smaller than Ossoff’s 30 point deficit among this same group. Biden also did better among white noncollege voters (-54 vs. -58 for Ossoff) though the difference was smaller.

So two somewhat different paths but with positive, albeit very narrow, results in each case. Ideally, Democrats would put together the strong points of each path and turn Georgia into the next Virginia. But it could also turn into the next North Carolina. We shall see.

So where do the Democrats writ large go from here? The winning strategy seems obvious. It seems almost certain the Democrats will not be able to get rid of the filibuster so many of the ideas Biden ran on will have to be put aside for now. But he should now be able to lean into One Big Thing the Senate victories should allow him to do–something that will greatly help the country and could allow the Democrats to escape a backlash midterm election such as Obama experienced in 2010.

That One Big Thing is a massive budget reconciliation bill to get the economy going again and advance some progressive priorities in the process. Jonathan Chait:

“Democrats can use reconciliation to pass economic relief, including the $2,000 checks that proved highly popular. This will give them a chance to accelerate the economic recovery, which in turn will create conditions likely to make voters reward Democrats in the majority.

They can also enact many of Biden proposals to shore up and expand Obamacare. A budget reconciliation bill could increase subsidies for people buying insurance in the exchanges, and also create a public option. Democrats have a fair amount of consensus on these changes. They might be able to also create some form of general income support, like “baby bonds.”…

It will be a battle. Crafting (and, hopefully, passing) the Budget Reconciliation Acts of 2021 is likely to be the drama that defines Biden’s domestic legacy.”

That’s exactly right. And it would fit perfectly into what Biden ran on. Bill Kristol:

“[Biden} made a bet on America. He never wavered from the promise to unite the country and actually get things done. People to his left scoffed. Trump supporters disdained him. But Biden never gave in. Tonight’s result in Georgia will at least give him a fighting chance to do what he promised—and to focus not just on the very real threats we face, but also on the opportunities before us.”

In other words, he ran as a liberal patriot. Here’s hoping he can make good on the promise.