Last week, as Trump supporters stormed the Capitol building, many journalists and observers struggled with how exactly to describe those carrying out the shocking acts. Early reporting on the events at the Capitol building used the label  “protesters,” but descriptions quickly evolved with news organizations opting to use terms like “rioters,” “mob,” “insurrectionists,” and even “terrorists.”  The following day, President-elect Biden himself made his case: “They weren’t protesters – don’t dare call them protesters. They were a riotous mob. Insurrectionists. Domestic terrorists. It’s that basic. It’s that simple.” Politicians on both sides of the aisle are using terms like “insurrectionists” and “rioters” to describe those who attacked the Capitol building.

But how do Americans themselves describe those who attacked the Capitol building? In a survey sponsored by Data for Progress and fielded online on January 12th, we asked a representative sample of 1,140 American adults what word or words they would use to describe the individuals who stormed the U.S. Capitol. We provided an open box where respondents could write anything they wished to describe these individuals. You can scroll through randomly selected responses by checking out this app. 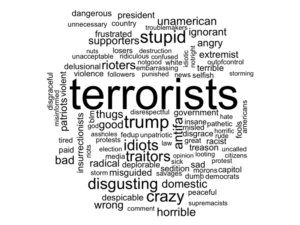 The word cloud shows the 100 most common words used in these responses sized based on how frequently they were used. The most common word people used to describe those who stormed the Capitol building was by far, “terrorists.” In fact, more than one of every ten Americans in our sample used the word “terrorists” without any prompting. The other words shown demonstrate just how upset and disgusted most Americans were by the actions of these individuals. People in our sample frequently used words like “stupid,” “criminals,” “crazy,” “disgusting,” “idiots,” “traitors,” and “horrible.”. Overall, a sentiment analysis of comments indicated that the words respondents used to describe those who stormed the Capitol building were 9 times more likely to be negative than they were to be positive. Many gave just single-word responses, but some couldn’t help but use a string of negative descriptors. For example, one individual simply responded with “Despicable, disgusting American terrorists” and another wrote “delusional, brainwashed, dangerous, extremist.” Several used the opportunity to note Trump’s role in motivating the mob, one writing that those storming the Capitol were “Trump loyalists who are being misled by lies” with another noting that “this problem was caused by Donald Trump. He should get a punishment.”

We also present the 20 most common words used in responses to our question in the graph below. Once again, it is clear that the vast majority of these words are quite negative. Some contextualization is also useful. When people used the word “domestic,” it was almost always because they were using the phrase “domestic terrorists.” Likewise, when Trump’s name was invoked, it was usually to note that the rioters were “Trump supporters,” though in some cases, Trump voters in particular used this opportunity to insist that he was not to blame for what happened. For example, one Trump voter wrote, “It was a set up to make Trump supporters look bad and to unseat the president.” 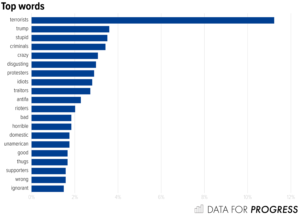 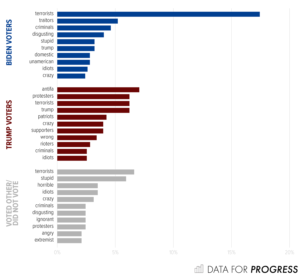 But it is worth noting that many other Trump voters had negative things to say about this group with “terrorists,” “crazy,” “wrong,” “rioters,” “idiots,” and “criminals” all among the top words used when describing the mob. In fact, Trump voters used almost seven-times as many negative words as positive ones.

It is also clear how the event has turned off non-voters and those who voted for a third party candidate in 2020 — the top 10 words among those individuals were almost uniformly negative. We found almost nobody in this group who expressed sympathy for those who stormed the Capitol.

Overall, our analysis of these open-ended responses demonstrates just how upsetting most Americans found the attack on the Capitol building and reflects how angry they are with those who perpetrated the violence. Given the outrage expressed by those in our survey, it is no surprise that there is overwhelming support for prosecuting those involved in the storming of the Capitol building and that a majority of Americans also believe that Trump should be impeached for his role in provoking the insurrection.

2 comments on “Data for Progress: Public Disgusted with People Who Stormed Capitol”