There are two questions to address: What happened in Georgia? And what will happen in Georgia?

Neither question is particularly easy to answer. But since predictions are hard, especially about the future, I’ll take the first one first.

To repeat something I’ve said before, the available survey data aren’t great and while we have good county-level and now precinct level data, these data are susceptible to the ecological fallacy, when aggregate geographic patterns are used to infer the behavior of voter groups contained with the aggregates.

OK then. Here we go!

Biden won GA by .3 percentage points and a little under 13,000 votes, so every gain he made anywhere was important.

Precinct-level analysis reported by Nate Cohn (shown below) shows a 2 point margin gain (the two party vote share shifts have to be doubled) in majority black precincts and a 1 point decline in precincts more than 80 percent black. So this is inconclusive.

3. White voter margins. All data sources agree that there was a very sharp movement of white voters overall toward the Democrats. But which white voters?

4. White college voters. Data sources agree there were strong margin gains for Biden among white college voters in GA. The exit polls are particularly gaudy, indicating a 30 point margin gain. That seems too high, but very strong gains are consistent with the county and precinct data.

So every little bit helped! Can this coalition stay together to elect two Democratic Senators? The polls say it’s possible–though these days we can be forgiven for not knowing what to make of this (though GA Presidential polls were actually pretty decent). Black turnout that outpaced white turnout would certainly help. I guess I’m still a bit skeptical this can really happen but I can think of no better way to make the case that it’s a still a strong possibility than reading this piece of Sean Trende, the excellent conservative political analyst.

“Control of the Senate is going to come down to two Jan. 5 runoffs in Georgia. Sen. David Perdue came a hair’s breadth from winning his race against Jon Ossoff outright, but ultimately fell just short of 50% plus one. Sen. Kelly Loeffler will face off against the Rev. Raphael Warnock to complete the term of former Sen. Johnny Isakson (the reward for the winner is running again in two years for the full term).

Somewhat surprisingly, articles discussing these races have framed the races to claim that Republicans are favored in both. Politico declares that Democrats begin behind the eight ball, while other pieces casually cast Republicans as “likely” or “probable” victors in the Peach State.

I’m not sure that is correct, and would view these races as pure tossups from the start. Here are six reasons why.” 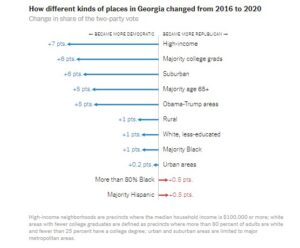