Is Trump Now an Underdog for Re-Election?

Probably. He wasn’t in great shape to begin with and the coronavirus, especially its economic effects, will hurt his chances even more. Plus the Democrats now are almost certain to nominate a candidate who, while far from perfect, can appeal to persuadable voters and will present a far more difficult target for the GOP attack machine.

Here’s a solid quantitative take from Alan Abramowitz, based on his updated “Time for a Change” Presidential election model. Of course, any model like this should be viewed cautiously, but the logic of Abramowitz’ model is sound and has a pretty good track record. Here’s his description of the model and analysis:

For the 2020 election, I have modified my time for change model by focusing entirely on elections with a running incumbent. That is because, in these elections, both the incumbent’s approval rating in late June and the growth rate of the economy in the second quarter have much stronger effects than in elections without a running incumbent. I have also modified the model to make the electoral vote, rather than the popular vote, the dependent variable because it is the electoral vote that decides the winner. I unveiled this version of the model last April in the Crystal Ball……

Table 2 presents the conditional forecasts of the electoral vote for President Trump depending on his net approval rating in late June and the growth rate of the U.S. economy during the second quarter. It takes 270 electoral votes to win a presidential election. The results indicate that, despite the huge boost that Trump is predicted to receive as a first-term incumbent, an economic downturn in the second quarter, combined with a net approval rating in negative territory, would very likely doom Trump’s chances of winning a second term. The only scenario here in which Trump would be favored to win a second term would be modest economic growth combined with a small improvement in his net approval rating, which has been stuck in the vicinity of -10 for many months according to the FiveThirtyEight average. The model suggests that a major recession would likely result in an Electoral College landslide for Trump’s Democratic challenger, especially if it is accompanied by a further decline in the president’s approval rating.

Based on the results of presidential elections since World War II with running incumbents, a president with an upside-down approval rating and an economy in recession would have little chance of winning a second term in the White House. If President Trump’s net approval rating remains where it is now or declines further, and if the recession is severe, with real GDP shrinking by three points or more in the second quarter, the result could well be a defeat of landslide proportions.”

It is important to emphasize here that Abramowitz’ model suggests that Trump is a poor bet for re-election, given second quarter economic contraction, even if his net approval rating does not decline. Thus, even if partisan polarization manages to keep his generally poor approval rating from declining further, he will still be in very bad shape. And if his approval rating does decline significantly–well, he may be out of bullets. 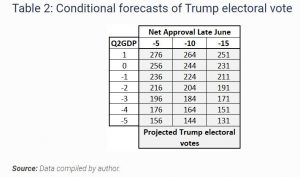