At The Atlantic, Ronald Brownstein writes about the rumblings of what may be a political earthquake in Texas: “Regardless of whether the Democratic nominee invests in Texas, the party is mobilizing a serious effort to win back the state House of Representatives, where Republicans now hold a nine-seat advantage; contest five or more Republican-held seats in the U.S. House; and challenge Republican Senator John Cornyn more formidably than it did in 2014. The continuing wave of congressional retirements among Texas Republicans—a “Texodus” that reached five in number on Wednesday with the announcement from Representative Bill Flores of Waco—has added to the sense that the state is becoming competitive once again after an extraordinary two decades of complete Republican control…The fundamental force that has shaken the GOP’s hold on Texas is that for the first time in decades, voters there are behaving in patterns familiar from other states. Democrats are showing gains in the state’s diverse, well-educated metropolitan areas, even as Republicans retain a crushing lead in small-town, exurban, and rural areas, as well as some suburbs…while the state overall still clearly tilts toward the GOP, the places driving its population growth are those where Democrats are gaining,according to state demographers.”

“Democrats’ gains in metro Texas have been helped by two currents,” Brownstein continues. “The first is growing diversity. Since 2010, census figures show, the state has added 1.9 million new Latino residents, 541,000 African Americans, and 473,000 Asians, along with just 484,000 whites. That translates to nonwhites accounting for six of every seven residents the state has added over nearly the past decade. The demographer William Frey of the Brookings Institution shared figures with me that show whites accounting for only about one-third of the state population younger than 30. Many of the suburban counties that once delivered reliable Republican majorities have changed substantially. “These are not the suburbs of the 1960s and 1970s,” Blank says. “These suburbs are significantly more diverse; they are significantly younger.” Since 2010, the number of eligible Latino voters has increased by at least 10 percent in five of the six suburban U.S. House districts Democrats are targeting next year, while the African and Asian American populations have grown even faster in most of them.”

However, Brownstein adds, “Both in 2016 and 2018, exit polls show that nonwhites cast 43 percent of the statewide vote. But the march toward a majority nonwhite electorate has been significantly slowed by lackluster turnout, particularly among Latinos. The Democratic firm Latino Decisions recently reported that while turnout from eligible Latinos in Texas soared from 1.1 million in 2014 to 1.9 million in 2018, the number of nonvoters dwarfed those who participated: 1.7 million Latinos who were registered to vote did not turn out, and 2 million more who are eligible have not yet registered. That huge gap threatens to again dilute the community’s impact in 2020, and despite all of Trump’s provocations, many Democrats are skeptical that the party knows how to significantly increase Latino engagement in Texas—a state with few unions that can organize these voters (as they do in Nevada) and with restrictive laws that hobble voter-registration drives.” Yet, “If there’s stronger turnout in 2020 among Latinos, Asians, and African Americans, even something close to a split among college-educated whites might be enough to allow a Democratic presidential candidate to withstand a towering Trump margin among nonurban, evangelical, and blue-collar white Texans.”

Nathaniel Rakich explains why “Americans’ Views Of The Economy Are Partisan, But They’re Not Immune To Bad News” at FiveThirtyEight: “So what’s perhaps more troubling for Trump is that independents’ opinions on the economy look a lot like Democrats’ — they often react to current events in a similar way, though their recent baseline is about 20 points higher. While it’s plausible that partisan polarization is so strong these days that even a recession would not change many voters’ minds about Trump, the fact that independents appear persuadable on the economy is a point in favor of the theory that a recession would indeed damage his reelection chances…Indeed, it might be a coincidence that Trump’s overall approval rating has ticked down in recent weeks amid speculation about a looming recession, but it also comes at a time when only 57 percent of independents have kind things to say about the state of the economy — the lowest number Quinnipiac has found since the summer of 2017.” 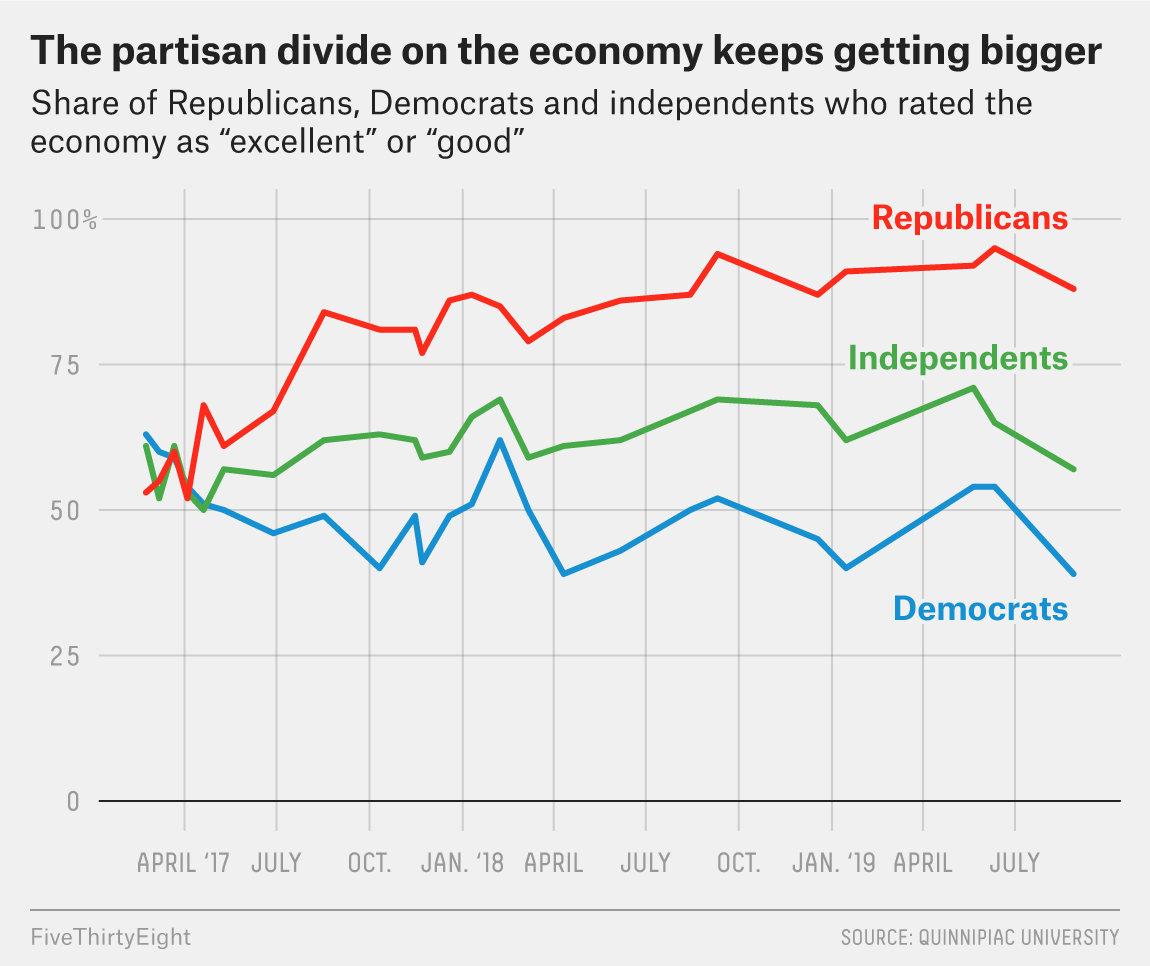 Anita Kumar’s Politico report on the Trump campaign’s new app to “keep supporters donating, volunteering and recruiting” includes some cogent observations about the value of apps in general as a campaign tool, including this one: “Betsy Hoover, who was online organizing director for Barack Obama’s 2012 campaign and later co-founded Higher Ground Labs, which invests in technology tools for Democrats, said candidates generally can’t rely on an app alone — even though it may be easier to have everything in one place — in part because of the arduous task of persuading someone to download it…“An app itself is not the answer,” she said. “You need a program and a strategy that engages supporters and builds community around your campaign. An app can help you achieve that strategy — but the strategy must be the primary focus and drive the usage of the app. If your goal is to recruit and train new people, an app is probably not your tool. If your goal is to increase the action your best supporters are taking, an app might be a great tool for management.”

Max Sawicky’s article, “The Wrong Way to Contrast With Trump on Trade” at The American Prospect” reviews Kimberly Clausing’s book, “Open: The Progressive Case for Free Trade, Immigration, and Global Capital,” but argues for a different policy direction for Democrats: “Corporatist trade deals have assumed a very different form, giving scant attention to social concerns and maximum emphasis to freedom of movement for capital (open borders!) and protection of intellectual property rights. This, above all, must be the target for Democratic attacks on the free-trade agenda…To compete with Trump on trade, Democrats need to stand for a trade regime that does not disadvantage U.S. workers by indulging inordinately low wages and lax environmental regulations among trade partners. Tariffs are a tactical weapon, purely a negotiating tool or a response to some kind of unfair trade, such as foreign firms dumping products below their own cost of production to eliminate competition. The overall objective should be more trade, not less, but where goods and the jobs that produce them flow in both directions in a more balanced fashion.”

In his New York Times column, “The Trump Voters Whose ‘Need for Chaos’ Obliterates Everything Else: Political nihilism is one of the president’s strongest weapons,” Thomas B. Edsall asks “How worried should we be about a fundamental threat to democracy from the apparently large numbers of Americans who embrace chaos as a way of expressing their discontent? Might Trump and his loyal supporters seek to bring down the system if he is defeated in 2020?…What about later, if the damage he has inflicted on our customs and norms festers, eroding the invisible structures that underpin everything that actually makes America great?…A political leader who thrives on chaos, relishes disorder and governs on the principle of narcissistic self-interest is virtually certain to find defeat intolerable. If voters deny Trump a second term, how many of his most ardent supporters, especially those with a “need for chaos,” will find defeat unbearable?” If Trump refuses to concede, it could get ugly for a short while. But my guess is most of the resistance would fade away after election results have been certified.

WaPo columnist E. J. Dionne, Jr. writes that “like it or not, the most important watchers of the Democratic debate on Thursday will be electability voters, who happen to constitute a majority of the party. And they are right to believe that the priority in 2020 is defeating President Trump. A man who invents the trajectory of a hurricane is not exactly someone whom we should entrust with four more years of power…Still, if the question of who can win is a constant, the dynamic going into this encounter is very different from that of July’s face-offs — and not just because 10 candidates who were there before will be missing. Rather quickly, the Democratic presidential race has come down to three candidates, and then everyone else…The battle for supremacy is between former vice president Joe Biden and Sen. Elizabeth Warren (Mass.), with Sen. Bernie Sanders (Vt.) holding on to his loyalists but having trouble reaching beyond them…For now, nearly two-thirds of Democrats support one of the three leaders.”