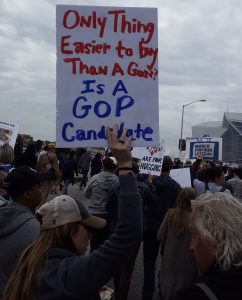 David Weigel has an encouraging article at PowerPost, “Democrats’ message at gun-control rallies: Do what the students say,” which shows why Democratic candidates are in a good position to benefit from the burgeoning gun safety movement. Weigel notes that “politicians, most of them Democrats, cheered them on from the crowd. Democratic leaders from both houses of Congress participated in the marches, along with dozens of colleagues and candidates who are running for office in 2018. Their message: Listen to the students, and do what they say…Chants of “vote them out” rang in Washington and at other marches…Democrats were more outspoken about what they wanted: legislation to tighten background checks, restrict the sales of some magazines, and a restored ban on “assault weapons…On Twitter, congressional Democrats shared messages of support, videos of the crowds they saw, and the names of gun-control bills they wanted to pass.”

From Steve Peoples and Emily Swanson of the Associated Press: “Support for tougher gun control laws is soaring in the United States, according to a new poll that found a majority of gun owners and half of Republicans favor new laws to address gun violence in the weeks after a Florida school shooting left 17 dead and sparked nationwide protests…The poll, conducted by The Associated Press-NORC Center for Public Affairs Research, found that nearly 7 in 10 adults now favor stricter gun control measures. That’s the strongest level of support since The Associated Press first asked the question five years ago. The new poll also found that nearly half of Americans do not expect elected officials to take action…Overall, 69 percent of Americans think gun laws in the United States should be made stricter. That’s up from 61 percent who said the same in October of 2016 and 55 percent when the AP first asked the question in October of 2013. Overall, 90 percent of Democrats, 54 percent of gun owners and 50 percent of Republicans now favor stricter gun control laws…Sixty percent believe that making it harder to legally obtain a gun would result in fewer mass shootings; just 49 percent said the same in the 2016 poll…7 in 10 favor a nationwide ban on devices known as “bump stocks” that allow semi-automatic guns to function like automatic guns…Nearly 6 in 10 favor a nationwide ban on AR-15-style rifles.”

In his syndicated column, “The March of the Hope-Mongers,”  E. J. Dionne, Jr. notes, “To begin with, Saturday’s marches achieved something that had never been accomplished before. Guns have long been a voting issue for those who insist that any and every restriction on firearms is a danger to freedom. These marches finally established guns as a voting issue for those who (as the signs carried by demonstrators declared in various ways) place the desire to save innocent lives ahead of preserving unlimited access to weapons…The unmistakably political character of this movement is another change. No phony bipartisanship. No pretending that everyone approaches this issue with goodwill. Thus the importance of “Vote them out.” Thus the imperative of casting the NRA as the adversary and all who welcome its money and support as complicit…this march established the gun safety alliance as multiracial and intersectional, reaching far beyond its traditional base among suburban white liberals…On a crisp and beautiful spring day, we witnessed a new dawn in the struggle against gun violence.”

But NYT’s Margot Sanger-Katz reports that “David Farmer, who led the Maine effort for universal background checks in 2016, said that supporters of gun rights can be particularly persuasive once a concrete proposal is unveiled. In Maine, polling support for the measure declined between introduction and the final vote, before failing, 52-48…We know for a fact we lost the argument at the kitchen table and the bar and the bowling alley,” he said. “…Gun enthusiasts were talking to their friends and relatives and neighbors. They felt about it in a way that was so passionate that they won those one-on-one encounters, and they were very successful in bringing in people to their side.”..The enthusiasm of gun rights activists doesn’t show up just in personal conversations. Over the last few decades, they have been more likely to speak to their legislators or give money to gun-related political groups, according to research from the Pew Research Center. Those actions have sent a signal to legislators that there is robust opposition even to laws that show strong public support in polls.”

Here’s a revealing nugget from The Daily Beast: “Rep. Ryan Costello (R-PA) announced that he will not seek re-election in 2018 due to the “political environment,” according to an interview with The Delaware County Daily Times. Costello claimed that the “deeply personal decision” was rooted in today’s political climate, saying that “it’s very difficult to move forward in a constructive way” with a “very angry environment,” and “hate” from the left. Costello’s 6th District was recently redrawn after the state’s Supreme Court found the congressional map to be in violation of the Pennsylvania’s constitution. With the new boundaries, the district is more Democratic than it was before.”

In his Plum Line post, “Why is Trump raging about the budget? Because Democrats got most of what they wanted,” Paul Waldman provides a list of “some of the ways Democrats won out in this [Ominibus spending] bill, despite being in the minority in both houses.” Waldman adds “Yes, there are some things in there that Republicans wanted. They boosted the defense budget to $700 billion and threw money at some other of their priorities, such as “abstinence-only” education. But when it comes to cutting domestic spending — which nearly all Republicans say they want to do — they took a pass…Why? The simple reason is that they’re afraid. They understand all too well that, while voters might say they like “small government” in the abstract, voters also really like nearly all the things government does. And when you start cutting those programs, there’s a backlash. With an election coming less than eight months from now, the last thing they need is to provoke controversies over slashing important and popular programs…Republicans know full well that their agenda, and even their entire ideological approach to governing, is one that the American public just doesn’t share. They have complete control of government, and they aren’t willing to put their beliefs into practice.”

So what is the lesson of Rep. Daniel Lipinski’s narrow win over the more liberal Marie Newman in the Democratic primary for IL-3 ? At Post Politics David Weigel explores some reasons: “Lipinski, who proudly touted his “F” rating from the National Rifle Association, offered just enough Democrats a trustworthy brand and some coherence on their issues…Lipinski won precincts in the city of Chicago by a landslide, a victory for that rattled but resilient Democratic Party machine. But Newman won the suburbs, in a race her supporters were happy to describe as the party’s past against its ideological future…Newman did not run against Lipinski as a superior legislator. She ran as an avatar for a new suburban politics: pro-abortion rights, pro-gay rights, pro-immigration and, above all, for government investment in social welfare…“Look, this was a Democratic primary, and critical forces in the labor movement stayed with the incumbent,” said Rep. Luis V. Gutiérrez (D-Ill.), who endorsed Newman.” With Lipinski’s narrow win over a newcomer, progressive Democratic candidates are not likely to get  discouraged.

Perry Bacon, Jr. and Dhrumil Mehta of FiveThirtyEight share some data about the current demographic profile of the Democratic party: “According to Pew, 33 percent of self-identified Democrats1 are whites without a four-year college degree. They represent a larger cohort in the Democratic Party than whites with a four-year degree (26 percent), nonwhites without a four-year degree (28 percent) and nonwhites with a four-year degree (12 percent). Yes, President Trump carried non-college-educated white voters easily in 2016; the exit polls suggest Hillary Clinton won only about 30 percent of these voters. But, because they’re such a huge portion of the U.S. electorate overall (44 percent, according to Pew) that’s enough to make non-college-educated whites a big share of the Democratic flock…And while the percentage of Democrats who are unaffiliated with any religion is growing and that group now makes up a third of the party, the majority of Democrats consider themselves Christians. And it’s not just black and Hispanic Democrats who account for the party’s churchgoing contingent: White Democrats who belong to “mainline” denominations, such as certain types of Presbyterians and Lutherans (12 percent), white Catholics (10 percent) and white evangelicals (7 percent) together form a is sizable percentage of the party — almost as large as the unaffliliated bloc. In terms of ideology, 46 percent of Democrats identify as liberal, the highest number Pew has found for that label since at least 2000. That’s a plurality, but it’s still a minority — Democrats who describe themselves as either moderate (37 percent) or conservative (15 percent) together form a slim majority of the party, according to the Pew poll…Young voters may tilt heavily Democratic, but nearly half of Democrats (47 percent) are 50 or older.”